“Concerted efforts to stem the flow of Americans and others traveling to join jihadists overseas have largely failed.” 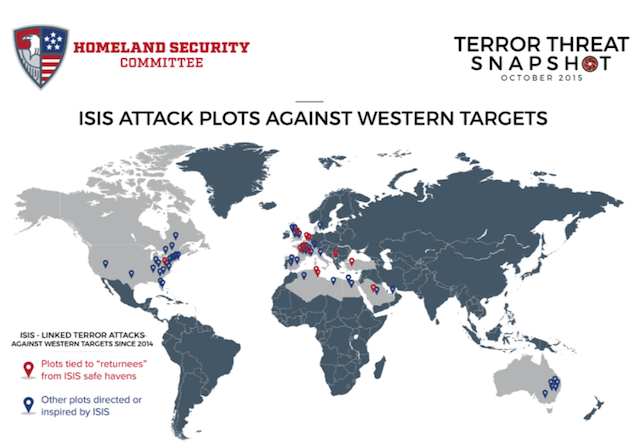 Today, the House Homeland Security Committee released a “Terror Threat Snapchat” detailing the growing threat of Islamic terrorism against targets both in the United States and abroad.

So far this year, officials have identified 61 total ISIS attack plots against western targets. This represents a 2x increase in attack plots since 2014. 17 of those plots focused on the United States, and authorities have arrested 55 people this year in ISIS-specific attack cases alone.

“Islamist extremist groups are consolidating their control over crucial terrain and seizing the initiative to expand their global footprint,” said committee Chairman Michael McCaul in a statement accompanying the report. “Destabilizing aggressors, from the Putin regime in Russia to the world’s leading state sponsor of terror in Iran, are filling the void of American withdrawal to disastrous effect. This global surge in radicalism and instability has directly contributed to the elevated threat level here at home. We need decisive American leadership that starts with shoring up our defenses and advancing a credible strategy to stop the threats at the source.”

Key takeaways (as per the Committee’s report) include:

Concerted efforts to stem the flow of Americans and others traveling to join jihadists overseas have largely failed. The House Homeland Security Committee’s bipartisan Foreign Fighter Task Force found that authorities have only managed to stop a tiny fraction of the hundreds of aspiring U.S. jihadists from leaving the country to join terrorists abroad. Moreover, the U.S. government lacks a strategy for combating terrorist travel, and glaring security gaps overseas are putting the American homeland in danger.

Despite a year of airstrikes, the United States and its allies have failed to rollback ISIS. In fact, the group has largely maintained its core terrorist safe haven while expanding its global footprint. ISIS kept its grip on Iraq’s Anbar province as the counter-offensive to take back the key city of Ramadi was put on “operational pause.” Its affiliates in Afghanistan, Egypt, Libya, and the Caucasus showed their growing strength by launching attacks or targeting local security forces over the past month.

The homegrown Islamist extremist threat in the United States has escalated dramatically this year. There have been more U.S.-based jihadist terror cases in 2015 than in any full year since 9/11. The number of U.S. terrorist cases involving homegrown Islamist extremists has gone from 38 in July 2010 to 127 today—more than a three-fold increase in just five years. See the Committee’s interactive Terror Threat Snapshot map, here. 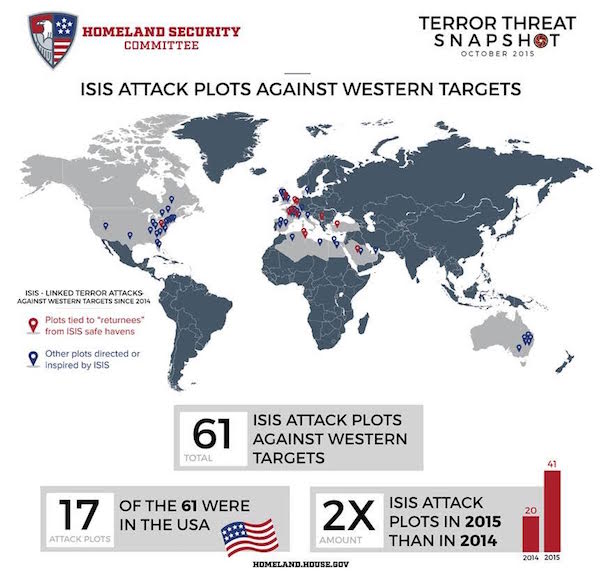 The first point—regarding Americans and others who have traveled overseas to join ISIS—is particularly fascinating. We’ve covered this issue here at Legal Insurrection:

Mississippi Couple Arrested for Plotting to Join ISIS on Their Honeymoon
Guardsman arrested for throwing in with ISIS
New Jersey man charged with planning to aid ISIS
Brits arrested for planning terror attack on US military
This again? Schoolgirls sneak away…to join ISIS

Back in 2014, House Intel Chairman Mike Rogers detailed reports showing that hundreds of Americans have pledged their sword to Islamic extremists—and some of those people have since returned to the US:

We already knew that ISIS’ social media game is slick and effective; now we know that their propaganda is working, and at a troubling rate.

You can read the full report here.

JV Team indeed. I wonder if the morons who voted for Obama are embarrassed by all of this. Or do they still blame Bush? The middle east is fucked up 10 times worse under Obama than it ever was under Bush. And 50 time worse than it was when Bush handed Barry the keys.

Odd there was no highlight of the Washington DC area, where the biggest threat to America – and his puppeteer, Valerie Jarrett — reside.