Today, federal prosecutors charged 21 year-old Samuel Rahamin Topaz with attempting to assist ISIS, and with conspiring with three other Americans to join the fight in the Middle East.

He was arrested Wednesday after officials discovered evidence that led them to believe Topaz was providing material support to a terror organization. One of his alleged co-conspirators, Munther Omar Saleh, 20, was arrested earlier this week on similar charges, and another, Fareed Mumini, 21, was arrested after attempting to stab an FBI agent during the execution of a search warrant.

Topaz appears to have panicked after Selah’s arrest, and may have been planning to move forward with plans to travel to the Middle East. The New York Times has the background:

Earlier this year, a friend of Mr. Topaz’s began talking to the authorities. He told them several people, including a man who fits Mr. Saleh’s description, were “trying to recruit” Mr. Topaz for overseas travel by “preying” on his insecurities, according to a criminal complaint prepared by an F.B.I. special agent.

In a text message in May to the alleged co-conspirator who fits Mr. Saleh’s description, the complaint says, Mr. Topaz wrote: “And bro I’m not sure how much longer I can take not being in the dawla honestly,” referring to the Islamic State. They discussed traveling to Turkey and then the Islamic State, and Mr. Topaz described efforts to raise money for the trip. Mr. Saleh replied at one point: “Then ur gonna enter the land of no music, and no Preverts taking girls out to violate them, no intoxication, no Filth, period! Allahu akbar!”

According to CNN, the FBI ramped up monitoring of potential terrorists after last’s month’s attack at a free speech rally in Garland, Texas left the country rattled. NBC New York reports that under questioning Topaz not only sympathized with ISIS, but took steps to join the fight. NBC provided a link to Topaz’s Facebook account, which still displays several “arguments” relating to his beliefs and intent to leave the country: 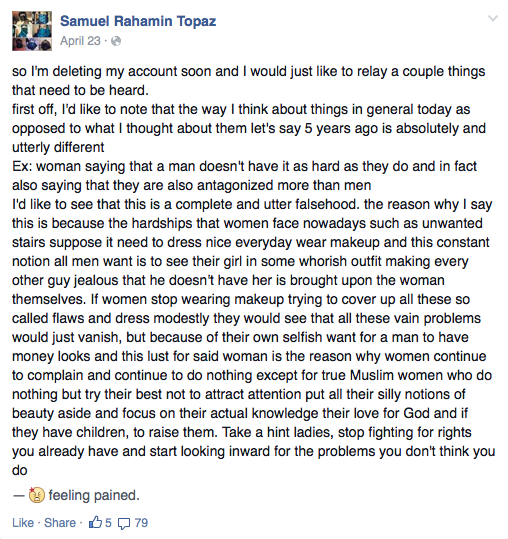 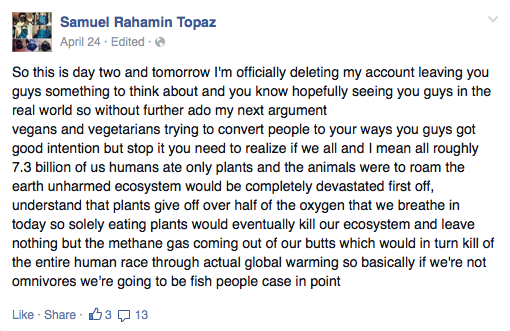 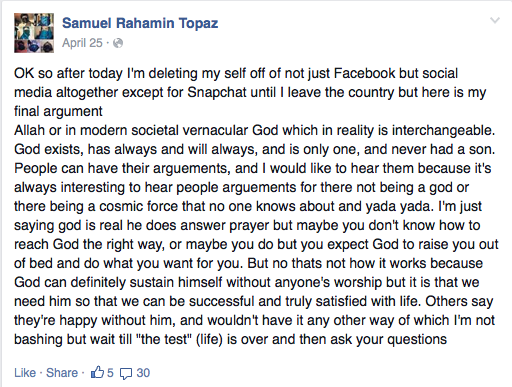 More updates on this as they come.

Topaz was arrested at his home and made an initial appearance in U.S. District Court in Newark on Thursday and was held without bail.

He was recruited by a college student, Munther Omar Saleh, 20, from Queens who was arrested earlier this week for plotting to build a pressure cooker bomb.

Borce Martinoski, Topaz’s attorney, said his client will plead not guilty to the charges. However, his sentence could carry a maximum penalty of 15 years in prison and a $250,000 fine upon conviction.

According to authorities, when investigators arrived at his home with a search warrant on Wednesday Topaz confessed that he sympathized with the Islamic State group and admitted that he had watched Islamic State videos of beheadings.
http://www.dailymail.co.uk/news/article-3130528/New-Jersey-man-charged-conspiracy-provide-support-Islamic-State.html

Well, I expect he’ll be away for a while. He likely would have been used by ISIS as a bomb delivery system, anyhow.

Let’s not rush to judgment, might be Sudden Jihad Syndrome (SJS).