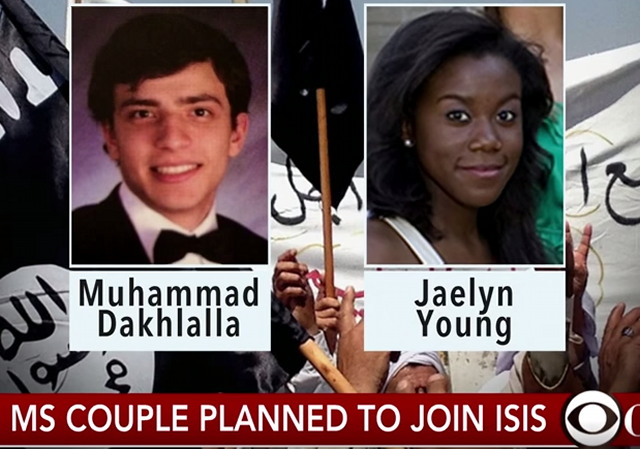 A Mississippi couple has been arrested for planning to join ISIS during their honeymoon in Syria. They were taken into custody as they were preparing to board a flight for Istanbul.

Two Mississippi residents were arrested last weekend and charged with attempting to provide material support to ISIS, according to a law enforcement official.

Muhammad Oda Dakhlalla and Jaelyn Delshaun Young were arrested at a Mississippi airport on Saturday. Authorities say they were planning to travel overseas to join the terror group.

An initial court appearance from Monday was continued to today, when a criminal complaint will be announced.

CNN obtained a copy of the criminal complaint filed in U.S. District Court. Law enforcement sources confirmed it is genuine but said the final version of the complaint could change.

According to the criminal complaint, Young and her soon-to-be husband were planning to fly from Mississippi to Europe, then travel to Syria and join ISIS.

Here’s a video report from CBS:

According to ABC News, the bride Jaelyn Young praised the Chattanooga shooting:

Before a 19-year-old girl from a small city in Mississippi was charged with attempting to travel to Syria to join ISIS, the young woman allegedly praised the Chattanooga shooting, which claimed the lives of five American servicemen.

“What makes me feel bette[r] after just watching the news is that an akhi [brother] carried out an attack against US marines in TN! Alhamdulillah [Thanks be to God], the numbers of supporters are growing,” Starkville resident Jaelyn Delshaun Young told an undercover FBI agent in a conversation online on July 17, a day after the deadly shooting, according to the FBI.

The Washington Post reports that a federal judge has denied bail for the young couple.

Hey! Black and white together. The progressives should be rejoicing, but the couple is locked up. So now the progs will be screaming “racism”.

Well, I guess now they’ll have to celebrate their honeymoon from a jail cell and just settle for being pen pals with ISIS.

they could see each other as their buses passed in the opposite direction.

(Though Justified told me there is no conjugal visit in the Federal system.)

Well, if you’re not with the one you love, you must love the one you’re with or something like that.

No honeymoon for you Jaelyn at the Hotel ISIS. You’ll miss the infidel whippings, the hotel’s midday brunch hangings and the merry misogyny. Shame. But you already knew…once you check in, you can never check out.

Those Who ISIS-Plot Together, Rot together…

We ought to put them on TV, and let some fawning interviewer ask them all kinds of questions. I’m sure somebody at MSNBC would do just fine. They’d be happy to spill their guts, then, and we’d all find out what they thought they were going to find on their honeymoon. The Daesh apparently have been spinning some fantastic tales.

Was the gal raised under Islam, or did Muhammad convert her?

Let them honeymoon at Johnson Atoll for a long while.

When she got to ISIS territory, she would’ve discovered racism like she’s never known or experienced before. Malcolm X was a liar—what else is new?—because in Islam, if you’re black, stay back. The Arabs are at the top of the pecking order; black skinned African and Indian Muslims are at the bottom. In fact, the word for black and slave is the same, abd. So, I very much doubt a wedding would have taken place. She likely would’ve been rape fodder for the ISIS akhi. Moron.

I see no reason to prevent these people from departing. Why arrest and jail them at taxpayers’ expense? Let them go and invalidate their passports immediately they board the plane so they cannot return. Strip them of citizenship since Muslims only care about the ummah anyway.