Judge: Congress can sue over Obamacare

Judge: Congress can sue over Obamacare

“I cannot overstate how big a victory this is for limited government and our first principles.” 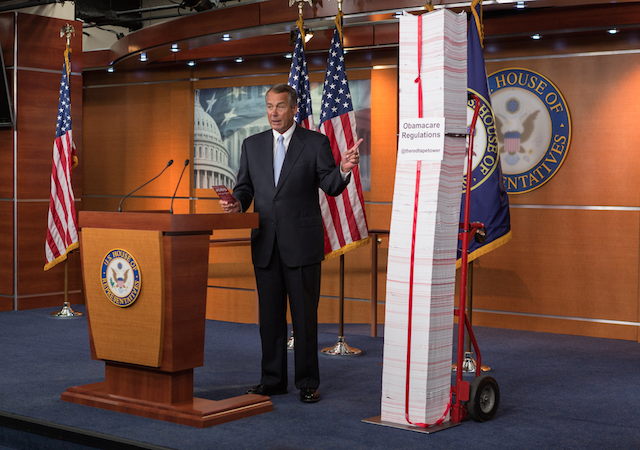 This past week proved contentious for Republicans in Congress. Allies returned to the dark side, Democrats sided with a mortal enemy, and a split in the caucus over how to best handle the disastrous Iran nuclear deal boiled over into a very public battle.

Amid the power struggle, the Republicans in the House came out ahead—at least as far as Obamacare is concerned. On Wednesday, a federal judge ruled that House Republicans have standing to sue the Obama Administration over the Administration’s handling of the Obamacare rollout. The House sued Health and Human Services Secretary Sylvia Burwell and Treasury Secretary Jacob Lew of both spending unappropriated money to implement the new policies, and effectively amending the employer mandate without the approval of Congress.

The court ruled that the House has standing to pursue its claims relating to appropriations, but not those related to Lew’s implementation of the statute. More via Reuters:

Collyer did not rule on the merits of the claims, only on the administration’s motion to dismiss the lawsuit on the issue of standing, a requirement in U.S. law whereby plaintiffs have to show they have been directly harmed.

On that issue, “the constitutional trespass alleged in this case would inflict a concrete, particular harm upon the House for which it has standing to seek redress in this court,” Collyer wrote in her opinion.

The Department of Justice will appeal the court’s ruling, said spokesman Patrick Rodenbush. An appeal could further delay proceedings on the merits of the claims.

“This case is just another partisan attack, this one, paid for by the taxpayers; and we believe the courts will ultimately dismiss it,” she said in a statement.

Speaker Boehner made a statement:

I was pleased that yesterday, a federal court ruled that the House does, in fact, have standing to challenge one of the president’s unilateral actions with regard to ObamaCare.

“I cannot overstate how big a victory this is for limited government and our first principles. Time and again, the president has chosen to ignore the will of the American people and to re-write laws on his own without a vote of the Congress. That’s not the way our system of government was designed to work. If this president can get away with making his own laws, future presidents will have the ability to do so as well.

“This is an unprecedented challenge by the House, and one the administration tried to avoid at all costs. So this victory sends a strong message that no one – especially no president – is above being held accountable to the Constitution.”

House leadership is also mulling a similar lawsuit over the Iran nuclear deal.

You can read the full decision here.

John Roberts has already demonstrated, twice, that there are no depths to which he won’t degrade himself in legislating from the bench to salvage Obamacare.

The four liberal “justices” are so far gone that no one ever questions how they will vote (and, being politicians, “vote” is the correct term for their purely partisan political opinions).

So, no, this lawsuit won’t amount to anything at all.

Sorry: I meant to do thumbs up.

This will have little to no effect on Obamacare itself, but the case has the potential to block future Administrations from spending money that has not been appropriated. Obama has taken the broadest view of executive discretion in every area; he essentially contends once the money is appropriated, the President can spend it as he sees fit, even on other departments.

Fear not. The quivering fake tan RINO named Boehner will figure a way to mess this up, too.

Boehner has zero interest in cashiering Obamacare. This is fodder for fundraising and to con the base.

Boehner is a (insert the vulgar name of a female body part here).

That sir is an insult to beautiful female body parts everywhere.

Actually, he is on the other side. All this is just a show to keep those votes coming. It has worked, will continue to work, right up until it doesn’t. See Trump, R.

How about no body part: he’s a eunuch.

And a corrupt one, too.

Nope. He’s a male body part, or even a cancerous lesion on a colon.

So now they have standing.

Let’s wait to see if they ever have any co-hoe-ness .

Yep, I seriously doubt this is good news to establishment pubs that want to pretend to care about conservative values.

Now, they aren’t “covered”, so they won’t be able to say we need more votes to stop them!

Boehner is going to fight against Obamacare….riiiiiight! How many times can the weeping orange drunkard sell this same lie?

“How many times can the weeping orange drunkard sell this same lie?”

Apparently a lot. But it is beginning to fail. 50-60% have finally caught on to the game. Better late than never…

And then there is the matter of what happens if/when the issue comes to trial.

1) Does anyone have any general belief in the integrity of the Federal courts in any case where the choice is Obama’s power -v- the Constitution?

2) Does anyone have any belief in the integrity of the DC Courts in particular in such a matter?

3) After taking the longest amount of time possible, assuming that the courts do not reject the premise of Congress having any say in anything, this will have to be heard by the Supreme Court. Probably about the time Crown Princess Malia assumes the regency for an aging Emperor Buraq I.

4) Does anybody have any belief that the Supreme Court will do anything but rule for the regime?

5) If by some miracle there is a court ruling against the regime, does anybody believe that the regime will do anything but deny/ignore it?

6) What means are there to respond effectively to #5 above, and if you say impeachment by a Republican Congress how does that differ from where we are today?

The solution is in the hands of the States… Article V Convention to cut the nuts out of the gorging pig that is the Federal Government.

You either haven’t thought about that, or you’re nuts. No sane person could possibly want a Convention, because there’s no telling what it would do. There is every chance that such a convention could produce a new constitution that would be a horror, with an attenuated ghost of the first amendment like they have in Canada or Europe, no second amendment, a right to “social spending”, education, and health care; whatever your worst nightmare is they could do it, and adopt their own method to ratify it, such as by a nationwide flat majority vote.

As constitutions go, even after all the damage it’s sustained we’ve still got one of the best in the world; if we gamble on a new one we’re far more likely to get a worse one than a better.

Well, it would be nice if could go all the way back to the beginning, where the Senate took a completely unrelated bill that had passed the House, stripped it and replaced the entirety with PPACA.

Except that that is routine, and absolutely constitutional.

Beg to differ. In the long term this is not a victory for limited government, but for the aggrandisement of the judicial branch over the other two. The three branches are supposed to be equal, so what is half of one branch doing suing a second in front of the third? What the House is saying is that the judicial branch is superior to the other two, and has the right to adjudicate disputes between them and tell them what to do. If it can order the executive to obey the legislature then it can also order the legislature to obey the executive, and surely nobody wants that.

No, the essence of the political question doctrine is that if the two political branches are in dispute it’s up to them to use whatever tools the constitution gave them to resolve it. The third branch is not mommy, to whom the children can run to tattle on each other and expect authoritarian justice to be dispensed.

If 0bama has violated the constitution (and he has) the proper constitutional method of bringing him to heel is impeachment and conviction. Unfortunately conviction requires 2/3 of the senate, and that’s impossible, so there’s no point in starting the process. He would only portray his inevitable acquittal as a vindication, just as Clinton did. That’s a flaw in the constitution, but taking it to court instead doesn’t correct this, it just introduces a second flaw.

I don’t know what the correct solution is, but this one sets my teeth on edge.