Chuck Schumer back in captivity

Chuck Schumer back in captivity

His breakaway from the Party lasted about as long as the inmates who escaped from Dannemora.

Chuck Schumer’s breakaway from the Democratic Party and obedience to Obama, by coming out against the Iran nuke deal, lasted about as long as the inmates who escaped from Dannemora prison in upstate NY in June.

Senator Chuck Schumer of New York is the highest-ranking Democrat to oppose President Obama’s executive agreement with Iran over the Islamic republic’s nuclear program. But during the Senate Democratic leadership’s final press conference prior to a vote on the deal, Schumer didn’t say anything about it. Instead, he chose to attack Republicans.

“Everywhere Republican leaders look this fall, there’s potential disaster lurking thanks to their hard right members determined to hold the government hostage unless they get everything they want,” Schumer said on Wednesday, referring to budget negotiations.

Forty-two Senate Democrats successfully blocked a bill to disapprove of Obama’s deal with Iran on Thursday. Schumer was one of four Senate Democrats to support the motion of disapproval, but he greeted failure with something of a shrug and even praised Obama’s “strong achievements in combating and containing Iran.”

“Regardless of how one feels about the agreement,” Senator Chuck Schumer, one of four Democrats to vote against Mr. Obama, said on the Senate floor, “fair-minded Americans should acknowledge the president’s strong achievements in combating and containing Iran.”

Acknowledging the tortured road he and other skeptical Democrats traveled, Mr. Schumer said, “I also have a great deal of respect for the careful thought and deliberation my colleagues went through,” adding, “I recognize for them that this is a vote of conscience just as it is for me.”

Respect and careful deliberation? From the President and Party who portrayed those who disagreed as traitors beholden to the Israel Lobby?

Schumer then went on to describe what a horrible deal it is. So he praises Obama and Democrats to the roof, while pointing out what a sellout the deal is.

Let me remind you, Chuck, how YOUR PARTY embraced you just a short few weeks ago, Ugliness: Iran deal supporters call Schumer a greedy, disloyal Jew: 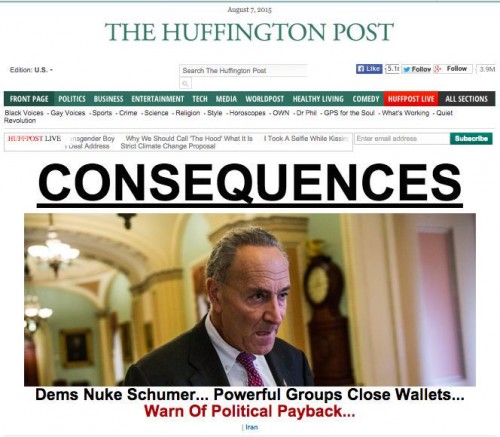 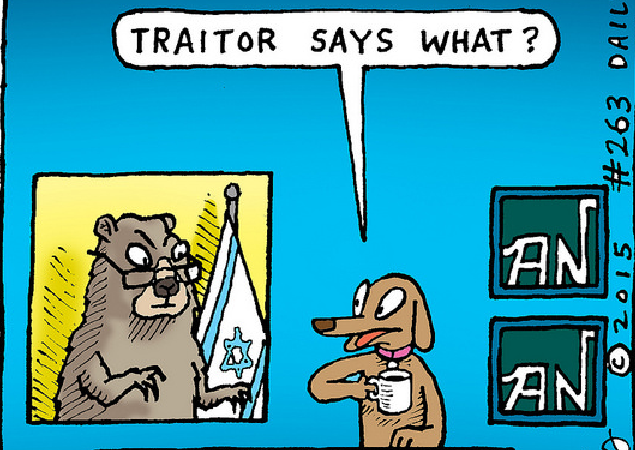 And Republicans are the problem?

See, it really was all another act of the DC dog and pony show.

Schumer is and has been a big part of the problem, for many years. He is one of several highly placed Democrats (Obama, Pelosi, Reid, for example) that engage in flagrant slander instead of any kind of legitimate debate.

He has a long record of such shameful behavior that jokes about the danger involved when getting between Chuck Schumer and a camera are common currency in DC.

Now events have shown that his latest “principled” stand was so much theater.

Worse than Chuckie being back in captivity, he has consented to the annihilation of Jews everywhere. Chuckie is proven to have a death wish.

Kapo Schumer is what I will call him from now on.

No, please. Much as I despise Schumer, he voted the right way.

Then reverted to the vile, dishonest, hyper-partisan scum he has always been. Criticize him for that, fine. But don’t call him names for voting the right way. Give him the little credit he earned for that.

People like you are the reason Schumer is able to get away with his BS.

He didn’t vote the ‘right way’. He cast a show vote when given permission by his masters who knew it was already veto-proof.

Told you it was just BS for the cameras.

Schumer is a loyal Obama dog that received permission to go ‘against’ the bill, knowing it would pass.

He never had any intention of bucking Dear Leader.

Just like Jeremiah Wright understood when candidate
Barry Obama distanced himself from his “spiritual” mentor
you can bet Iran’s favorite US president is quick to
forgive Schumer’s transparent pandering to his Jewish
base because sometimes you just have to do the right thing
no matter how much it sickens you.

He just gave new meaning to his old nickname of “Flash-Bang”. This time instead of a compound of people dying, it will be hundreds of millions.

Schumer: “…the president’s strong achievements in combating and containing Iran.”

How? In what world?

Oh, I see: “we gave those who wished to destroy space.”

We may as well shutter congress at this point.

Schemer is negotiated a well- orchestrated, Harry Reid replacement campaign…he sells his at the religion of power. Follow the money,….