Is America Ready to “Fall in Love” with Joe Biden?

Is America Ready to “Fall in Love” with Joe Biden?

It is easier to fall in love when you are looking to do just that. 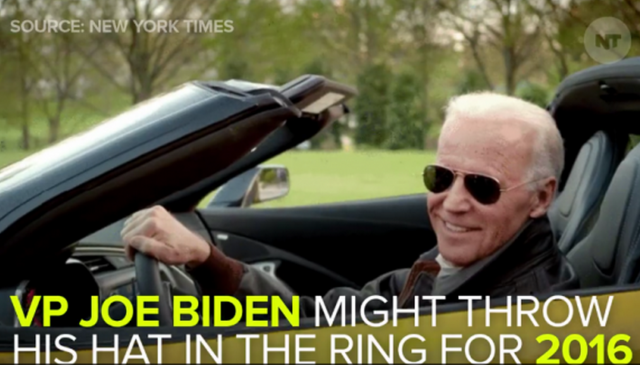 The Democratic Party side of the 2016 Presidential race got a bit more intriguing this week, after Vice President Joe Biden released a zeppelin-sized trial balloon:

Vice President Joseph R. Biden Jr. and his associates have begun to actively explore a possible presidential campaign, which would upend the Democratic field and deliver a direct threat to Hillary Rodham Clinton, several people who have spoken to Mr. Biden or his closest advisers say.

Mr. Biden’s advisers have started to reach out to Democratic leaders and donors who have not yet committed to Mrs. Clinton or who have grown concerned about what they see as her increasingly visible vulnerabilities as a candidate.

…On Saturday, the New York Times columnist Maureen Dowd reported that Mr. Biden had been holding meetings at his residence, “talking to friends, family and donors about jumping in” to challenge Mrs. Clinton in Iowa and New Hampshire, the first two nominating states.

There can be no doubt that the Democratic Party is rethinking its coronation strategy. Legal Insurrection has chronicled Hillary Clinton’s problem-riddled campaign. The “highlights” from last month alone include these chestnuts.

We aren’t the only ones who have noticed the problems, either. A new Wall Street Journal/NBC poll shows Hillary Clinton has now lost ground among one of her key constituents: White women. This news follows other polls that show Clinton has also lost substantial ground against her other Democratic Party rivals.

Joe Biden would be foolish not to throw his hat into the ring if he harbors even the slightest inkling of desire to be President.

It is said that when it comes to picking their nominees, Republicans “fall in line” and Democrats “fall in love”. So, is it possible for Joe Biden to effectively court voters during the primary season?

Now, I am sure many Legal Insurrection readers are rolling over in laughter at this concept, given how closely we follow the news (e.g., when he publicly canoodled the wife of the new Secretary of Defense). However, I suspect that a lot of Democratic voters will find him more appealing than Clinton.

I have been binge-watching “Parks and Recreations” in Amazon Instant Video these past weeks, and I chuckled at the clip where plucky protagonist and civil servant Leslie Knope met her fantasy man….Joe Biden.

Personally, I do not plan to vote for Joe Biden at anytime. However, it is clear that he can turn on the charm. He has also held his own in debates with Sarah Palin and Paul Ryan, though I would not have declared him a “clear winner”…unlike the elite media. I also believe he has the ability to woo voters desperate to have a tolerable alternative to the corruption-scandal-plagued Clinton.

After years of dealing with Obama Drama, is a little plagiarism really going to be a problem for Biden’s likely constituencies? I suspect not.

Biden also has a compelling back story, especially with this particular campaign. His son’s tragically early death from brain cancer, replete with a death-bed wish to have his father run, will move many to take a good look at Biden’s history. I must admit, I was very moved by Beau Biden’s funeral coverage. And while conservatives may not find Biden appealing, Democrats wanting to elect a non-Clinton may.

Is easier to fall in love when you are looking to do just that.

(Image from Now This video).

LOL Thanks for the Big Laugh today Leslie!

A nation of idiots deserves to be ruled by idiots!

I am truly sorry Biden lost his son. No parent should have to see his child die. However, the dying wish story is pure BS and it is really BS that was unnecessary. If Biden decides to run, fine. Just don’t base the reason for running on an obviously made up story.

If Beau Biden truly wants his dad to be President, there is no reason, as a Democrat, that he can’t continue voting for him.

Did the DemocRAT circus come to town? Seems to me that we have heard this story before. The clown in chief and chief plagiarist Joe Biden running for Prez. I guess they need someone else to take the place of the Hildabeast.

Clinton’s nose-diving polls coupled with Obama’s narcissism on ‘legacy’ will cause Obama to support VP Biden, which is typical anyway for an outgoing president. But Obama’s calculation is that Biden is far more likely to support and protect Obama’s ‘legacy’ actions: Obamacare, Iran deal, etc.

I predict we’ll see some very interesting new stuff in this campaign cycle, coming out of the Obama camp.

The Obama camp is the same as the Biden camp. And it does not bode well for Hillary. To be honest, it does not bode well for our country. The only way from here is down. Will Biden help? He would no doubt help continue the downward spiral. But it wouldn’t be right to say it would be a case of riches to rags since our country is pretty much in rags as it is. Trump says he wants to make our country great again. In that scenario it would be a case of rags to riches. My own personal opinion, however, is that it will be a case of no more robes for Pierre for the indefinite future.

Come on in Drunken Uncle Joe, the water’s fine!

We can only hope… he’s sure, as always, to be gaffe-tastic!

“The Onion”, the news satire site (not safe for home or work) has some articles about Biden as a “regular guy.” Quite amusing. Sample:
http://www.theonion.com/article/biden-investigated-for-questionable-workers-comp-c-32571

Biden is everything that is wrong with American politics: ignorant, uninformed, dishonest, corrupt, sleazy, entitled, entrenched — and loved by Big Business and Big Media.

In other words, he’s a Democrat.

If Joe gets into the race, I think we should coordinate an LI tribute where we all fire shotguns off our front porches at the same time.

All that stuff Democrats were spouting about Ronald Reagan at 69 being too old to be President just when down the memory hole as they rally around Joe Biden who will be 74 in January 2017.

..during a press conference.

Who mentioned the decidedly un-Beau Biden?

Things that make you go ugh!

A series of investigations conducted on behalf of the Caesar Rodney Institute, called “Rogue Force”, revealed ongoing problems with the prison medical care, in addition to accusations of physical abuse by a handful of guards at SCI. “There is an abusive atmosphere at SCI that permeates the whole place,” Hampton told the Caesar Rodney Institute for the series. “They have a hands-off attitude about the number of use-of-force incidents. It just isn’t important to them.” Depositions obtained by Hampton from several guards at the Delaware prison facility while investigating an assault of a prison inmate named David Kalm “revealed that the DOC is breaking its promise to the federal government, in which it agreed to provide specific training to the guard force, as part of the federal Memorandum of Agreement between the DOC and the U.S. Department of Justice.”[12] The DOC signed the agreement in 2005 rather than risk litigation in federal court, following another case of poor medical care. Lawmakers appealed for federal investigation of the state’s prison system.

Daddy has been grooming Beau Biden for the Senate from time immemorial.

To smooth his son’s path, Joe Biden installed his old crony aide, Edward Kaufman, as a placeholder when he gave up his seat to take the vice presidency…

The Attorney General of the State of Delaware, Beau Biden has a very good reason to want to take away the powers of arrest from the sheriffs in Delaware: FEAR.

Absolute fear is the motivation. The Attorney General and a host of Delaware politicians and government employees are terrified of one lone sheriff.

I’ve been saying this for weeks. Glad others are catching on.

It’s obvious: Hillary is imploding. After all this time, she still fumbled an easy email question from a local anchor last week. And we have not begun to look closely at the donation patterns, except for UBS. Dozens of foreign companies and countries got what they wanted from State after big checks to the Foundation and/or paying Bill a big speaking fee.

The Party people are worried about their down-ticket. They are already under stress with GOP successes on the state and local level. A collapse of the national ticket could prove disastrous not only next year, but for years to come.

Biden is acceptable to the left, loyal to Obama, never made enemies of the Clintons, and can keep Big Labor on board. He won’t win (unless we give them the gift of nominating a bigger clown), but he can lose respectfully. At this point, Hillary may not even be able to do that.

No. He’ll be the democrat Bob Dole.

But it will be fun to see him elbow Clinton out of the way.