Is this the dumbest thing Hillary Clinton has said so far?

Is this the dumbest thing Hillary Clinton has said so far? 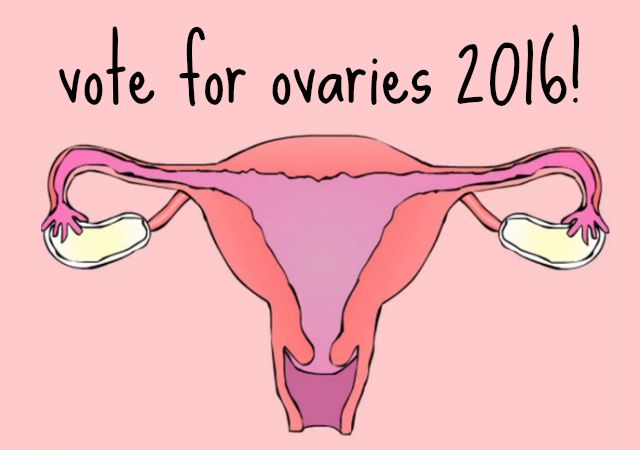 Of all the idiocy that’s seeped out of Hillary Clinton’s mouth, this just might take the cake as the dumbest thing she’s said so far.

Ruby Cramer, the Buzzfeed political reporter on the Hillary beat captured the moment on social media:

.@HillaryClinton: I'm not asking ppl to vote for me bc I'm a woman. Vote "on the merits. And I think one of the merits is, I am a woman."

It’s hard to pick the most delicious part of Hillary’s statement. Is it that based solely on her anatomy (shudders) she should receive our votes? Is it that she completely negated traditional feminism and exposed modern feminism? Or is the best part that she believes that her ovaries merit stewardship of the White House?

In the case of the latter, I would rather vote for a pair of ovaries than for someone who thinks reproductive organs make one qualified for the highest office in the land.

The reader may remember a focus group of Iowa Democrats who struggled to name one accomplishment of Hillary’s. In the absence of actual accomplishments, perhaps ovaries are the only “accomplishment” Hillary can muster. Conversely, not once has Carly Fiorina suggested her womanhood should be a determining factor in her electability.

Democrats must be really embarrassed.

Not if you intend to blackmail humanity with a pro-choice doctrine that upholds sacrificial rites to indiscriminately kill [and sell] human lives.

Democrats must be really embarrassed.

I like how you ended your piece on a humorous note, Kemberlee.

Is it that based solely on her anatomy (shudders) she should receive our votes?

She said it was ONE of the merits.

She didn’t go further, because it would be a reducto ad absurdum. She was going as far as she could to ask people to consciously weigh it.

Women I know of a certain age LOVE Hillary for two reasons. If you ask them right out, some will admit it.

I mean, you know, a woman running for President could be a Republican. She wouldn’t want someone to vote for someone like that.

Isn’t claiming that an XX genetic make-up is a “merit” inherently sexists?

Why, yes. Yes, it IS sexist. In addition to being just stooooooOOOOOOOooooopid.

We need a candidate who can run on genetic inequality!

And worse is that she is less typical a woman than Barack Obama is a typical African American.

And I guess it rules out the ‘rats entire male homosexual wing fro ever running. XY ain’t happening, according to all this.

The Hillaryness swears like a sailor, is rarely been seen once wearing something other than a pantsuit, is known to be a mean drunk and meaner adversary. Biologically female but mentally?

Maybe this is the democrats long term plan:

2008 – Push the first (half) black president (who’s past we know nothing about).

2016 – Push the first female president in (who’s past we are not allowed to discuss).

2024 – Push the first LGBTQIA president (who’s past surgeries or sexual preference we’ll not be allowed to discuss) because it’s HATE.

2030 – Push the first Illegal Immigrant for president (who’s past national allegiances, and past criminal record will not be discussed) because it’s RACISM.

Whenever someone says they support Hillary because they think we should have a woman president, I’m always tempted to ask if they’d support Casey Anthony for president.

I’d be happy to see a woman President.

How about Sarah Palin?

Helen Reddy: I am Woman.

Don’t laugh, just could be if Trump runs a 3rd party.

Every time Hillary! says, “I am Woman” the person she’s talking to should say, “What difference at this point does it make?”

That’s terribly cis-gendered of her. She’s just oozing cis-female privilege! She’s othering I don’t know how many trans* Americans out there. I feel micro-aggressed on their behalf. Somebody find me a safe room.

I think you’re being sarcastic. Sorry. I call ’em as I see ’em.

Ovaries don’t do much for me. I’m more into vaginas, but hers wouldn’t be included. It’s probably as nasty as the rest of her.

Apparently the Clinton team was unsuccessful in identifying differences to point out between Hillary and her challenger, Bernie Sanders, so they were forced to go with gender.

He also doesn’t wear pastel pantsuits, at least not yet. He may have to don one if he wants the homosexual male vote.

I dunno… Bernie looks like a little commie sissy to me, and what with the whole pants-suits-24-by-7-by-365 thing with Clinton I’m thinking they should just prove it during the first debate.

Her dumbest thing ever said? Ask her and I’ll bet she says “I do.”

Kemberlee, two things: 1).’rats are NEVER embarrassed 2). Kindly post a barf alert before using the words “delicious” and “Hillary” in the same sentence. Thanks. 😉

On behalf of all men who identify as women but have no ovaries but think they do just because they dress like women and grow man boobs like a woman (kinda) and wear bras and dresses – I think they should be shocked and offended and the LGBYXYZ community should be up in arms.

Next, she’ll focus on why people should vote for her because of her being a giant rectum.

I liked the size of Sarah Palin’s ovaries. You know, the ones she wore whilst catching and gutting salmon and shooting timber wolves and grizzly bears?!