The debate surrounding congressional approval of “fast track” trade authority has officially taken a swan dive through the looking glass.

Obama wants it. House republicans want it. Democrats, for the most part, are ready to vote “no”—their union backers are making them more nervous than the White House ever could—even if it prevents their president from advancing more legacy-building legislation.

More from the AP (emphasis mine):

Obama himself, who’s been unusually personally engaged on a bill that could amount to the biggest achievement of his second term, paid a surprise visit to the annual congressional baseball game Thursday night for some 11th hour persuading. Obama arrived as Democratic and Republican lawmakers faced off at Nationals Park and was greeted with chants of “TPA! TPA!” from the GOP side — the acronym for the Trade Promotion Authority fast track bill. He brought beer and visited with lawmakers on both sides.

Earlier, in a closed meeting in the Capitol, top White House officials implored Democrats not to deny Obama the trade authority. Such a vote, they said, would block needed trade expansion for the nation and sink a major priority of the Democratic president.

It really happened—I was there to see it: 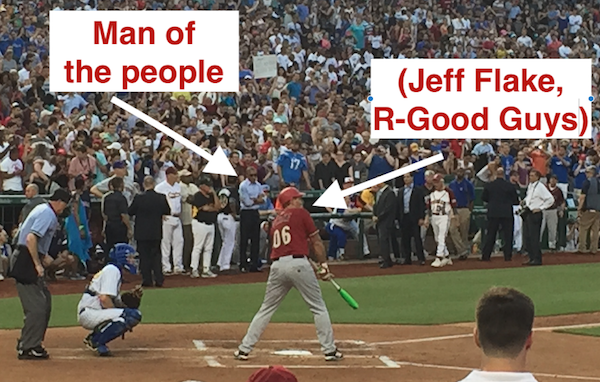 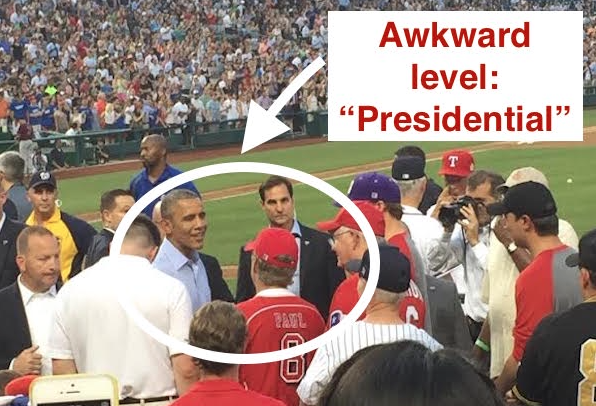 (Aside: the congressional baseball game was the most supremely Beltway event I have ever attended—and I had a blast. Kevin Brady came thisclose to hitting it out of the park, Linda Sanchez wore number “IX” and ripped a line drive into right field, and Nancy Pelosi marked the occasion with a beige pantsuit*. #ThisTown in action.)

Friday’s House votes on TPA are expected to be close, due to both collegial tensions, and pressure and rhetoric lobbed from special interest groups on both sides of the issue. (I wrote about some of the more unfortunate messaging “mistakes” here.)

In other TPP politics news, some are concerned that foreigners are paying former politicians to lobby for the pact. And National Journal reports on some contretemps among conservative movement types as the Heritage Foundation’s campaigning arm, Heritage Action, advises against a pro-TPA vote that House Speaker Boehner and most Republicans want, in an attempt to get Boehner to act on a separate matter, letting the Export-Import Bank die:

“It is total fiction. No one in this chamber is talking about Ex-Im and trade in the same breath,” the aide said. “They have concocted a false pretense to oppose a bill.”

Meanwhile, TPA backers are out in force with explanations bolstering the bill’s legitimacy outside the political sphere. Kenny Marchant (TX-24) writes:

Absent TPA, the President has the constitutional power to negotiate trade agreements without Congressional input, transparency requirements or a mechanism to make agreements available for public review. But other countries will not engage in serious negotiations – or offer real concessions – until they know the U.S. is negotiating in good faith.

That is why TPA is essential. It puts Congress – not the administration – in charge of trade negotiation objectives. It sets clear transparency requirements and makes agreements available for public review. And it shows our trading partners that America can be trusted.

We’ll keep you updated on the vote.

*In case you were wondering, John Boehner wore a button down and boat shoes—as he often does:

Barack Obama, US House, US Senate

VOTE NO! I trust Jeff Sessions on this mess.

I agree with that succinct analysis of a complicated issue.
Additionally, if voting today’s bill down makes it materially harder for obama to get his America- destroying TPP passed later this year, then that is sufficient reason to defeat the TPA.

I just feel so dirty…

As you should. The nausea will start now that you and Nan-nan have voted down the bill. Later, parts of your body will go necrotic.

First rule in legislating while Obama is President: If Obama supports it, its bad for the country. Period.

It seems that we have not learned our lesson from “If we want to know what’s in it, then we’ll have to pass it” nor have we learned from the countless lies of Obama that he cannot be trusted. Are we that brain dead that we are incapable of learning from mistakes we made only a few years ago? America, you elected these horrible excuses for leaders so you deserve what you get.

We’ll find out that everything Obama couldn’t get thru Congress will be “in it” once its passed. Amnesty, gun control, Fairness doctrine, carbon taxes…..it will all be in there.

First, I am in favor of free trade and know to get that you must negotiate with other parts of the world to establish that. Second, congress has to be involved in any decision to accept any trade agreement. It seems to me, that no matter who the president is, the US negotiators HAVE to be able to carve the agreement knowing they must get congressional approval but if congress is allowed to make changes, there is no reason to negotiate as any agreement ANY congressional body D or R would want to make changes if they are able to. All presidents (even the ones I dislike i.e. Obama) should have the ability to negotiate and if the majority of both houses dislike the agreement, then they should vote it down. Allowing any congress to make adjustments that then have to go back to negotiations would be a meaningless process with no end or approved agreement in the end and if that is the process then drop it. Negotiations are a waste time and money. If this president negotiates a bad deal vote IT down.

If this president negotiates a bad deal vote IT down.

1) we have NO opposition party in this country to vote it down.
2) name one time when the DIABLO’s have stood their ground against Obama. They cave every time.

If the TPP literally gave the United States lock, stock, and barrel to ISIS, the Republicans would give in if Obama wanted it. This is an Enabling Act.

Once fast-track is authorized, all the ‘secrets’ will appear and the up/down vote will be akin to a vote on a government shutdown; we HAVE to vote yes or our world will end. Don’t worry, we’ll fix it later.

This is how governments steal nations from their citizens. Here’s looking at you, EU.

This bill will pass and end up becoming law.

The implications are every bit as bad as was that of the Obamacare fiasco which also was not read by the majority of lawmakers with the ONLY difference that our own party has betrayed us! Trusting once again the proven liar in the white hut ensures the continued downward trek that began with the LBJ administration.

Once again, I’m thankful that I’m not one day younger than I am. That last six and a half years have been hell on earth and this chapter is the most outrageous yet. If I’m lucky, I’ll not see the the time when the doo doo finally hits the fan.

Keep in mind that of the leading presidential contenders, only Scott Walker has voiced his opposition. BOHICA!

It’s not that I necessarily know the trade agreement is bad. Because, how in the world can we possibly know?

I do, however, know that the logic cited in support of fast track authority is disingenuous.

I mean seriously, other countries won’t negotiate in good faith because Congress isn’t in charge of the negotiations? We didn’t all just fall off the turnip truck here? Isn’t the entire point – and I’m not even arguing it’s an illegitimate point – to keep Congress from nitpicking to make rubber stamping a deal in its entirety all but a certainty? Isn’t that why presidents seek trade authority in the first place?

Obama and the House Republicans are for it but the Democrats are against it??? Holy crap.

More evidence that voting Republican is a necessity to stop the Democrat Party agenda. (*crazy*)

Silly citizens. Like the TPA is any of your f**king business.

This is a crazy world when Pelosi and the dems tell 0bama to stuff it, while the weeper and the rest of the RINO’s are in bed with the black messiah.