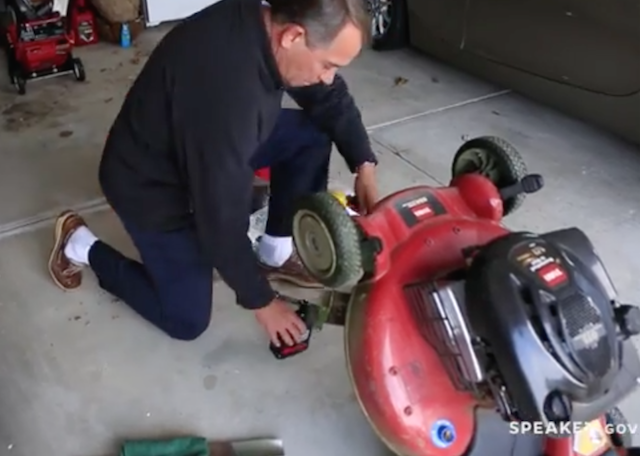 Earlier today, the Speaker’s office released a light, approachable (we’ll talk about this later), “Happy Spring” video from the Man himself, showing John Boehner purchasing and installing a new blade on his push mower.

He may be the Speaker of the U.S. House of Representatives, but he still irons his own shirts, washes his own dishes, and yes…cuts his own grass. But a well-kept yard requires well-kept tools, so in the video, Speaker Boehner preps his push mower for the springtime.

Flawlessly executed “man of the people” spot? NAY. Soon after the video was released, the internet noticed something…horrifying. Behold: 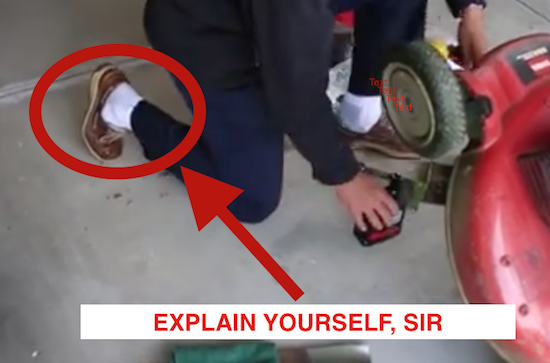 Speaker Boehner has out-dadded all of us, America.

Not one to be outdone, Boehner responded in kind:

Team Boehner’s approach is different, but it’s banking on the same idea: people want to see politicians out of context.

When I say “people,” I don’t necessarily mean people who are constantly engaged in the political process. I’m talking about people who don’t follow this stuff 24/7, who have no clue who John Boehner is, and whose votes we’re going to be fighting for in 2016.

You may love John Boehner, or hate John Boehner, but that doesn’t matter. If you already have a strong opinion about the Speaker, this little throwaway spot wasn’t for you. I stand by what I said yesterday; this type of messaging is incredibly important in terms of outreach. If you want to build relationships with voters, you need to humanize your candidate.

This type of messaging doesn’t replace the red meat—it just (in some cases) precedes it.

Somewhere in the country today, a fair weather independent who voted half the ticket in 2012 because he didn’t much care for anyone, to be honest, just clicked on that video, watched it, and chuckled.

That chuckle isn’t everything, but it’s the spark that leads to an opening to a conversation that could lead to one more vote for the GOP ticket in 2016.

FYI, Speaker Boehner has a bit of a sock fixation, as Luke Russert learned back in 2012:

As NBC’s Luke Russert began asking about the Midwest drought during Boehner’s weekly press conference, the speaker stopped him dead in his tracks. The sight of Russert’s sockless feet, tucked into loafers, elicited commentary.

“Nice socks you have on, by the way,” Boehner sarcastically said, who then gave a serious eye roll to Russert’s apology and explanation that “it’s laundry day.”

Russert asserted that Boehner appeared, sans socks, on a local Washington State television years ago, but Boehner firmly replied that “I didn’t have a tie on. It’s a really simple rule: if you’re wearing a tie, you should be wearing socks.”

Thank allah we have Boner. Otherwise the clueless “R’s” would probably re-elect Nanci Pelosi “speaker” out of habit.

Yes, this spot changes everything. A stroke of genius. Boehner reborn.

Um… how, when, and why will people who don’t pay attention to politics ever see this or any other candidate/incumbent’s Important New Messaging?

Video is still a failure to communicate if you ask me.

Boehner is in the backseat after getting a lawnmower blade. He should have been seen getting out of the driver’s seat of an old clunker with it in order for it to resonate independents.

All that means is they’ll get more of the ads they’ve been ignoring because they don’t follow politics – but they’ll still ignore them.

You set yourself up for some manspaining smartassery, and I’m JUST the guy to provide it…

THAT is not a “push mower”. It is in fact a high-end rotary SELF-PROPELLED mower. You can tell by the bar above the handle-bar, which is the “dead-man” self-propelled clutch.

See to it this never happens again… Power tools are serious.

The cover over the rear-axle drive gear box is a giveaway.

I will bear the weight of this shame for at least the next 15 minutes!

Socks and a hat. The latter to block the sun’s harmful rays, or perhaps absorption of anthropogenic CO2. Why isn’t he wearing a hat?

He likes a tan!

It sure looked like he put the blade on upside down. Also, what the hell was he pouring in the gas tank – 2 cycle oil?

Looks like he didn’t pull the plug wire. Call OSHA on him right now and have him sit through five hours of lawn mower safety talks and film.

Is there any reason to believe that he’s not actually changing the blade on Obama’s mower?

Real men sharpen their own blades. And I assume he is bagging all that grass. A mulching blade would efficiently “recycle” and save a lot of useless bagging and hauling.

He really mows his own yard with that little mower? We need someone to stake out his house to find out.

Here is a shot of him mowing … probably not a small lawn. He’s not bagging in that picture, so someone please tell him to get a new blade. 🙂

My point on this:

The Rubio google vid and this Boehner vid are held out as superior, new, innovative because (1) they show the candidate and Speaker as ‘one of us common folks’ and (2) because the delivery vector of ‘targeted ad placement’, and (3) because it delivers the message to new people who heretofore basically ignore politics. However..

(1) American politicians have been kissing babies, rolling up their sleeves, picking up shovels, and doing their best to pretend they’re ‘just like us’ for… oh… over 300 years now. There is hardly anything new about this.

(2) ‘Targeted ad placement’ is just as old, also practiced since before our country was formed. Nothing new in this either.

(3) If people are ignoring the former ‘old’ targeted ads, they’ll ignore any ‘new’ targeted ads that appear on their various digital devices because they do not watch and then reject ad messages – they don’t watch them in the first place. They skip right over them. This is how and why they are nicknamed LIVs, low information voters. They don’t read politics, they don’t watch politics, and they don’t know politics. It’s by choice and more finely targeted ad placement will do nothing to make them actually click on and watch them.

I would respond more positively to an add showing him mowing unconstitutional executive orders.

I don’t want to hear another positive comment about Rubio. What a twinkie of a candidate.

Y’all let me know when that self propelled mower goes renegade and turns on boner, then I’ll watch.

JB can change his lawnmower blade. Yea. Now if the American people get their way on immigration, he’ll have to push it too.

More appropriate would be watching him demonstrate 180’s on a zero-turn mower.

He’s placing himself as a “lawn-order” candidate?

You should pay a price for that one.

Sorry, I don’t buy it. This is absurd, the man is a treasonous POS and there is no audience whatsoever for this crap because nobody respects Boehner or thinks he’s a ‘regular guy’. Everybody that knows him has his number; those that don’t, have no idea who he is and likely don’t care.

Boehner is where he is because our system is corrupt and compromised and it may be past saving. New technology & cynical, folksy shorts won’t save it, especially when the other party is always light years ahead of us on this crap. Also, their potential voters respond better to fakery.

Now, if you want to talk a candidate who has real principles who produces a series of shorts explaining these ideas in a positive way, I’ll reconsider. But no fakers or traitors need apply