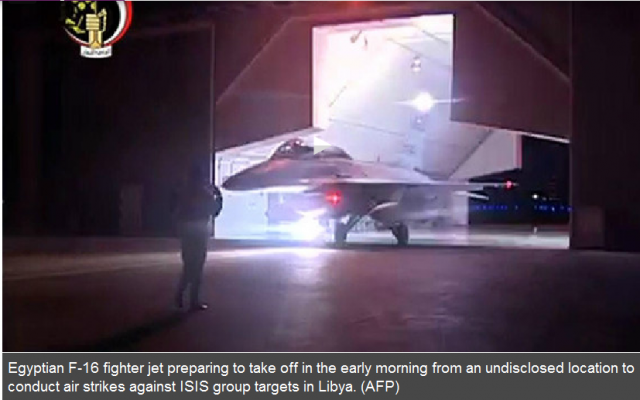 Amid all the violence and chaos on the streets of Baltimore, I thought I would check on the status of the chaos and violence in Libya.

The last time we reported about the region, Egypt’s commandos were striking ISIS, its air force was bombing terror strongholds, and its President, Abdel Fattah el-Sisi, was calling for a United Nations resolution mandating an international coalition to intervene.

As one might have projected, the UN response has been less than robust. So, Egypt is planning another operation.

Egypt reportedly is preparing a large-scale ground and air assault along the Libyan border to oust the Islamic State group from eastern Libya. DebkaFile, quoting military and intelligence sources, said naval and marine forces are assembling at Egypt’s Mediterranean ports for a possible assault on Derna, the militants’ provincial capital.

DebkaFile noted the Islamic State group, also known as ISIS, represents an unacceptable threat to Egypt, and President Abdel Fattah el-Sisi has been warned extremists already have penetrated some Egyptian towns and military units. ISIS fighters are being smuggled through the Sinai Peninsula and Egypt from Syria and Iraq by drug rings, DebkaFile said.

Libya has deteriorated to near-chaos since former strongman Moammar Gadhafi was dragged from a drainage pipe and executed in 2011 following a NATO-led air campaign to oust him. The country has been divided by warring factions — one led by the legitimate government operating out of Tobruk and the other led by militias operating out of Tripoli. The West has been reluctant to intervene further since terrorists burned the U.S. consulate in Benghazi and killed U.S. Ambassador Christopher Stevens and three others in 2012.

One of the complaints that Egypt has is that the United States hasn’t been exactly responsive to the threat.

….The anti-Islamist governments of Egypt and Libya are complaining publicly that the U.S. is not providing enough counter-terrorism assistance and is supportive of the Muslim Brotherhood.

They remain appreciative of the U.S.-backed intervention to topple Libyan dictator Muammar Gaddafi, but criticize the U.S. for not having a plan to contend with Islamist terrorists and militias afterwards.

Egyptian President El-Sisi is gently criticizing the U.S. for not supporting the anti-Islamist government of Libya enough. He said, “there is a legitimate [Libyan] government and that government is denied the weapons it needs to confront terrorists.”

“Libya Dawn is part of militant Islamists which get weapons, ammunition and supplies from all over the world, but America and Britain have other ideas against the interest of the Libyan people,” Al-Thinni said.

He accused the U.S. and U.K. of siding with the Muslim Brotherhood and trying to get the “terrorist grouping” into political power. Al-Thinni said his country would instead look to Russia and accused Turkey of supporting the Libyan Dawn forces.

Egypt’s President looks poised to go forward with this operation, despite opposition from the Obama Administration.

“President El-Sisi was not surprised to hear from the CIA director that the Obama administration objects to a direct Egyptian invasion of Libya, but would not oppose Cairo acting through local Libyan militias,” said DebkaFile.

Perhaps after this operation concludes, El-Sisi will chat about Obama’s reaction with his new BFF, Vladimir Putin?

Why any country would wait on the UN in a time of crisis or urgency is a mystery to me. To publicly make requests is probably more of an “optics” move for political reasons. And it is not surprising that this fabled but mostly imaginary “coalition” the Obama administration touts would be taking actions contrary to the administration’s wishes. It’s all a bigger mess in the region lately thanks to our ambiguity and lack of resolve.

El-Sisi will get his UN intervention. When Egypt, Saudi Arabia, and Jordan have ISIS on the ropes, the UN will step in and insist on a ceasefire, probably for “humanitarian concerns.” The Obama administration and Iran will again find themselves on the same side of the aisle as they join to second the motion.

What I hope is that this Egyptian operation will be successful. It would improve conditions around the Middle East and North Africa by ripple effect. If ISIS can be defeated, that reduces its attraction.

Obama will not be able to effectively oppose, in retrospect, a successful effort.

I would love nothing better at this point in the 2016 cycle than to have video of our president cheerleading the Muslim Brotherhood.

Huma Weiner, Muslim Brotherhoodlem, was asked to comment, but her male relatives responded that she was in conference with Ol’ Walleyes on matters of national security and could not be disturbed.

DebkaFile is not all that reliable – I think everything it says has got something wrong.

Egypt may very well be preparing (along with Saudi Arabia probably) some kind of an offensive or offering some kind of help to the legally recognized Libyan government (the U.S. recognizes it) which is allied with General Hifter.

But their opponent is not “ISIS”

Not all of that has gone over to ISIS.

Here, for instance, the enemy is still called Al Qaeda (and not even exactly al Qaeda, but al Qaeda affiliated groups):

I say Saudi Arabia because there’s just been a shake-up there. The deputy crown prince was just replaced (at his own request) by a son of the king in his 30s)

The people in charge all are involved with “security” but Prince Bandar bin Sultan is out – it’s different people.

Saudi Arabia is active in Yemen and in Syria, where they’ve gotten behind a group, consiting mostly of Original al Qaeda ® ™ (al Nusra and some affiliates) and some smaller groups backed by the US. to try to clear the syrian government out of northwest Syria. They have pretty much got one province and are going after the other (?) two. It’s called the “Army of Conquest” to boost its morale.

Saudi Arabia only wants dictatorships that are unfriendly to Israel at the minimum.

Meanwhile Irsna seems to be trying to get the Syria government, whose other stronghold is Damascus and points south (plus a land link to the northwest) to attack or faculitate an attack by Hezbollah on Israel. This would be mostly rocket attacks.

It’s not clear to me whether Iran is tryng to get some use out of the Assad government while it still can, or is trying to expand the war in the hopes there will then be a peace agreement or ceasefire which will preserve the Assad government in power, or if some other theory is correct.

Obama has acted upon changing the post-WW II order in the Middle East. Egypt was fortune to survive the chaos and regression he supported during the so-called “Arab Spring”. It would be suicide to tolerate the corruption Obama spread in Libya through his pro-choice policies of proactive wars, regime change, assassination, terrorism, etc.

Obama the thing that was never anything……..

This is a classic example of the Fox Butterfield fallacy. (The trigger word is “despite”)

I have said for years that if your life depends on the UN…. you are dead. I have added the USA to that saying. I hope that part will change in the future but I am not holding my breath as I believe Obama is not the problem, only a symptom.