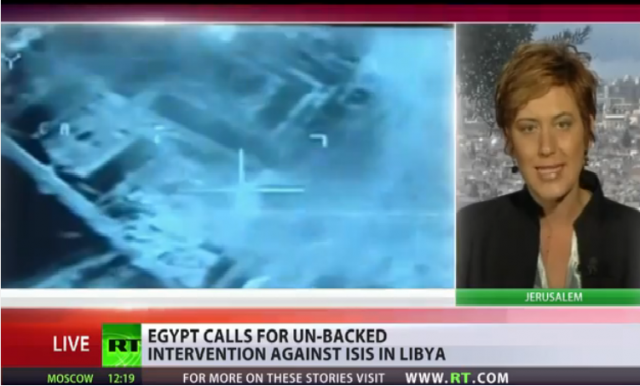 Egyptian President Abdel Fattah al-Sisi has escalated his battle with ISIS in Libya by sending in Egypt’s special forces, which are considered some of the best in the world.

Ansa news agency cited unnamed local sources as saying that an Egyptian commando stormed the eastern Libyan town, a stronghold of the Islamic State (Isis) there, “capturing 55 Daesh [IS] militants”.

The Libyan National Army wrote on its Facebook page that Egyptian forces in coordination with the local army stormed IS camp in Derna, “killing a large number of IS militants and capturing several terrorists including Egyptians, foreigners and Arabs”.

An Egyptian newspaper, ElWatan News, reported that several jihadists were killed in the operation.

I suspect that the only jobs program Sisi is interested in providing ISIS involves the funeral industry.

You might think that such a robust response to the terror group that has threatened President Obama would be winning all sorts of support from the White House.

The Obama Administration immediately condemned the Egyptian and Emirate attacks in retaliation for the slaughter of the Christian Copts. According to Pentagon spokesman Navy Rear Admiral John Kirby, the U.S. believes the crisis in Libya must be solved politically and without outside interference:

“We discourage other nations from taking a part in Libya’s issues through violence,” Kirby said. “We want the issues solved in Libya to be done peacefully and through good governance and politics and not violence.” [1]

At this point it is more than legitimate to raise a question: why would the United States be allowed to strike wherever they want, such as Iraq for instance, while other countries like Egypt, who are facing eminent threats, shouldn’t be authorized to attack?

…At this point it is not hard to understand why Obama does not want to support Egypt and does not want other state-actors to attack jihadists in Libya. The US Administration discourages any type of military intervention, which is the same message that has been given to Italy by the Arabic website of the Muslim Brotherhood.

Italians are deeply concerned about ISIS activities in Libya.

According to recent reports, the Italian Secret Service fears an air attack by ISIS, compounding the already existent danger of terrorist infiltration among with throngs of immigrants coming to Italy by boat from neighboring Libya.

Several days ago, the air defense system went into high alert after the secret service sent a notice.

The notice spoke of aircraft prepared to take off from Sirte and able to strike the Italian peninsula. Though this has not yet occurred, tensions remain high because of the strong risk of an attack carried out by “lone wolves” as occurred in Paris and in Copenhagen.

Rumors that American representatives were planning talks with Afghanistan’s Taliban leaders in Qatar have been officially denied.

The young monarch’s response has been so fierce that some in Washington now speculate that Jordan could become the new leader of a Sunni Arab alliance against ISIS and even introduce ground troops into the battle.

King Abdullah apparently has the same jobs program for ISIS that Sisi has.

Clerical work for insurance agency, full time with benefits, and salary commensurate with experience. Looking for go-getter Islamic pre-jihadist type contemplating bombings and beheadings in near future if demands not met. Must be a team player. Come help us help Obama help you. Apply in person, unarmed, at 123 Main St, Possum Holler NC.

can I work from home?
pretty good with windows (and some open source) servers so could setup home based users for you to prevent one of us from hurting you like your family hurt detroit.

Just noted that Sisi is an anagram for ISIS.

Could this be fate?

Rags – Need a consult on opposing Fraudulent Lien Filing discussed previously. Likely to become an issue shortly.
– Please send e-mail via my consulting company listed on the right hand side of my Blog “Fleeing from Utopia.” Blog has listing for consulting company. Consulting Company has link for “contact us” that sends to an info account.

That looks an awful lot like secret code. What are you and Mr. Skinner really up to?

Sisi is the anti-ISIS.

I believe the plan all along was to have Libya turned over to the terrorists. As it was in Egypt. The Egyptians just thwarted the Obama / Iranian plan.

So, of course bambi doesn’t want the Egyptians killing his terror buddies.

Funeral industry jobs seem appropriate until there is no one left to bury.

After all these years I didn’t think anything could possibly deepen my contempt for 0bama. I was wrong.

Our country has weaklings and imbeciles in charge throughout our government, including in the military. Incompetence and mediocrity are now job requirements. Where are our leaders? Where are those who will stand up to this bungling idiot and his parade of clowns?

At some point senior Pentagon officers are going to refuse to carry water for Obama. Adm. Jack Kirby must had to swallow his professional pride really, really hard to be able to make a statement such as this; he, and every other military person above pay grade E-3, knows that a Kumbayah singing cicle-jerk is not going to solve the ISIS problem – only intervention by force will accomplish that goal.

While it is still a good idea to have the military under civilian control, that does not imply micromanagement. It’s simple, really: Once it is clear that the application of force is necessary the civilian leaders tell the military how much force should be applied and where – then they shut up, get out of the way, and let the professionals decide how best to apply that force. (Of course, the truly intelligent civilian leaders will consult with their military counterparts before they issue those orders!)

There seems no question that none of this is going to happen prior to the last third of January 2017, mores the pity.

Have to disagree with you. Everyone paygrade E-1 and above knows what you said.

Adm Jack Kirby is well liked by the media and that is a problem for me. At any rate he has already been relieved of PR duties and will be replaced ASAP by a civilian. I am sure he has a career waiting for him at one of the media outlets – and it won’t be Fox. My bet is CNN.

“Adm. Jack Kirby must had to swallow his professional pride really, really hard….”

There is only one way to defeat IS and the Egyptians plus Jordanians have it right…. BOOTS ON THE GROUND. They cannot be defeated in the air.

This is unsurprising. The Obama State Dept met with the Muslim Brotherhood last month immediately before they issued a rhetorical fusillade against al-Sisi. Obama has previously come out against the ousting of the Muslim Brotherhood and has in general demonstrated support for their aims and objectives throughout the ME.

Now Obama is running interference for ISIS in Libya. You can always determine where Obama is going to come down on an issue. It is always on the side of our enemies.

Jordan may well want to put boots on the ground in Iraq, but will Iraq let them in? The Iraqi government has been pretty restrictive over who they let in to fight ISIS. The Iranians seem to have a free pass, but Sunni Muslims?
I wouldn’t put it past the Obama administration to be letting the Iraqi’s know that they do not want anyone else’s boots on the ground.

Regarding SISI and Egypt. You just need to look back at what happened to Honduras just after Obama was elected for the first time to see that there is no way Obama will come to an accommodation with SISI. Obama will be rooting for the Muslim Brotherhood to take over Libya.

Remember Obama saying to Madeyev that he would have more flexibility after he was reelected? Well, Russia is expanding into South America. Ukraine may be seeing the extent of Obama’s flexibility. Additionally. Russia has been invited to restart its military base on Cyprus in the Med. And, I read that the Left wing government of Greece is looking to invite the Russians in.

Everything is moving swimmingly.

When, oh Lord, will we have a President like this again?

“To be strong nationally is not a sin, it is a necessity! We must be strong first to defend ourselves, secondly, to give the necessary dignity and influence to the words of our leaders…A weakling, particularly a rich and opulent weakling, seeking peaceable solution of a difficulty, is likely to invite contempt; but the same plea from the strong is listened to most respectfully.” ~Dwight Eisenhower

After winning the WWIII Obama is stumbling into.