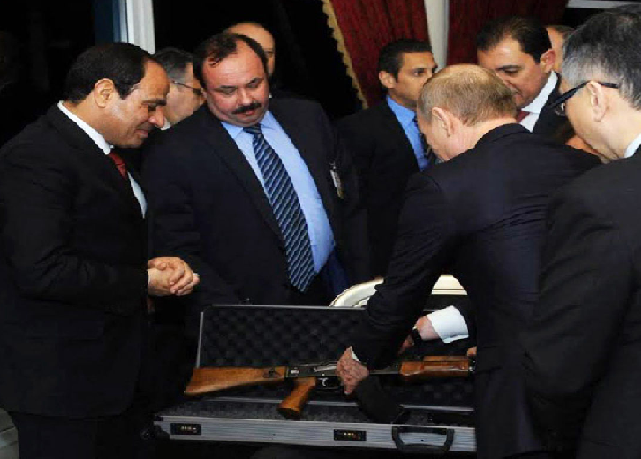 A while back I noted that Egypt looked like it was networking with European powers to address the chaos that threatens the vital Suez Canal.

Just hours before a summit in Minsk that could decide the fate of eastern Europe for a generation, Vladimir Putin had a gift for the president of Egypt: an assault rifle.

A photo of the rifle, with its wooden stock and accompanying gun case, along with a smiling President Abdel-Fattah El-Sisi, was posted on the website of Egypt’s state-controlled MENA news agency. The rifle was identified as an AK-47, according to the state-run Russia Today’s Arabic website.

A video of the exchange, which occurred at the Cairo Aiport shortly after Putin arrived.

But the AK-47 isn’t the only present in Putin’s bag: Last year, the two countries made a $3 billion deal that includes Russian attack helicopters and MiG-29 fighter jets. Additionally, Russian businesses have agreed to proceed with a major grain storage construction project in Egypt.

The most fascinating aspect of this new friendship? Russia is going to help Egypt build its first nuclear power plant:

Vladimir Putin and Abdel Fattah el-Sisi made the announcement on Tuesday at a joint news conference in the Egyptian capital, where they signed an agreement on the plant’s construction.

“If final decisions are made, it will mean not just building a nuclear power plant, it means the creation of the entire new atomic industry in Egypt,” said Putin.

The plant would be built at the existing nuclear site in Dabaa, on the Mediterranean coast west of the port city of Alexandria, where a research reactor has stood for years.

It looks like the Smart Set in Washington is just fine with this development:

Washington has no problem with Egyptian-Russian plans for a nuclear station west of Cairo, the US Department of State said Tuesday.

“We support peaceful nuclear power programs as long as obligations under the Nuclear Nonproliferation Treaty to which Egypt is a signatory and obligations to the IAEA are fully met and the highest international standards regulating security, nonproliferation, export controls, and physical security are strictly followed,” US State Department spokesperson, Jen Psaki, said during the daily press briefing.

Israeli Radio contributor Benny Avni offers this analysis in The New York Post, which notes that Putin has exploited an opening left by Obama:

Wait, how did Sisi all of a sudden become the Kremlin’s BFF? The ex-general rose up the ranks of an Egyptian army that was almost exclusively backed by America. Sisi was even a fellow at the US Army War College in the early 1990s.

Simple: America no longer wants the friendship of a man who, according to his detractors, has reversed Egypt’s progress toward democracy.

To make that point, President Obama suspended for a while the annual $1.5 billion US aid package to Egypt. He also held up deliveries of military hardware like US-made attack helicopters, which Sisi desperately needs to fight ISIS and other Islamist terrorists in the Sinai.

…To continue his fight against extremists, Sisi needs military hardware, money and diplomatic backing. Washington managed to convince the entire Arab world that we’re siding with the Muslim Brotherhood (or with Tehran), rather than Sisi.

I traveled through Egypt in 1988, and was warmly received as an American after effective diplomacy in the 1970’s enhanced our relations with the Land of the Nile…wooing it away from the Soviet Union.

Now, it appears that the AK-47 came with a “reset” button…one that Obama built.

Russia, I think, has special disinformation that is aimed at Egypt covertly trying to convince Egypt, or people who support the current government, that the United States backs, or deliberately backed in the past, the Moslem Brotherhood, or other Islamic extremists.

Quote: Yes fake quotes from Clinton’s books are spreading like fire among Egyptians in the Pro-Military Pro-Police Anti-Jan25 Facebook pages and twitter accounts about the role of the U.S not only creating ISIS but also the deal between the U.S and the Muslim Brotherhood in Egypt.
For instance one of those fake quotes from Clinton’s Non existent book “Plan 360” about the plan set up by the MB and the U.S which was sabotaged by the Egyptian army on 30 June and how the U.S ordered its USS Submarines to approach Alexandria but the old Russian MEG aircrafts Egyptian air forces stood against the submarines. [End quote]

There’s also a fabricated excerpt (the people recirculating that don’t or can’t check the book) of Hillary Clinton’s memoir, where Clinton purportedly recounts how, as secretary of state, she spearheaded a U.S. plan to create ISIS to wipe out the despotic rulers of the Middle East and replace them with more malleable Islamist leaders.

Now the United States (even under Obama) never supported the Muslim Brotherhood. It was only at most loyalty to constitutional forms.

Now Sisi has to know that at least some of that is not true.

The source of all these stories and forgeries is probably Putin, and there may be some special forgeries intended for al Sisi alone.

As I had stated recently in an LI article about Yemeni terrorist threats to the Suez Canal, the canal is so important to so many world powers that Egypt will have no trouble getting the help it needs.

It’s not so much a vacuum as it is a mess. These days whenever there is crisis somewhere in this world John MacCain hops on a plane and proclaims US’s support when few people here know the first thing about the place. We insert ourselves into a coup and then leave. Our “diplomacy” is something ultimatumish…
I think O’s idea of foreign policy was hanging out with Byonce (sp?) and Castro in the White House. I don’t think he understands that nations have their interests, and for the life of his he can’t tell you what ours should be.

Putin gives Sisi a Kalashnikov. When it comes to messaging, that sure beats an iPod filled with personal speeches.

What’s interesting is that Ruskies are picking off mortal enemies — Greece, Turkey and Cyprus; Armenia and, perhaps, Azerbaijan; Sunnies and Shia; Israel expressed interest in Customs Union.
Here is a thought-provoking editorial on Europe breaking off with the US on Ukraine:
http://america.aljazeera.com/opinions/2015/2/to-solve-ukraine-crisis-europe-breaks-from-the-us.html
But never mind, Russia is isolated and the sanctions are working.

Another American ally finds the grass greener on the other side. I wonder how long before Israel finds a more reliable partner.