Ariel Gold: “It took us about two hours to get them to arrest us” 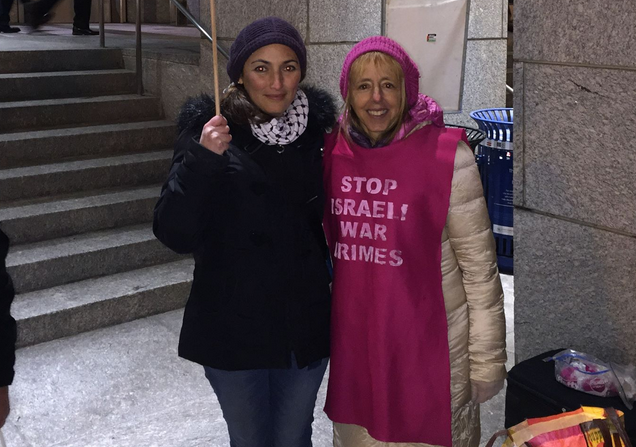 On Sunday, March 1, 2015, we provided on-scene coverage of Code Pink’s “Shut Down AIPAC” protest. The most notable feature of the protest was the waving of Hezbollah flags.

Code Pink managed to get some press coverage even though it didn’t shut down AIPAC, or even an itsy, bitsy part of AIPAC, because five protesters were arrested, including two from Ithaca, my current place of residence.

One of the arrestees, Ariel Gold, may be familiar to readers from prior coverage of Gold’s efforts to have GreenStar Food Coop in Ithaca boycott Israeli products and products co-owned by Israelis, such as Sabra and Tribe Hummus. Gold is employed as a professional organizer for Friends of Sabeel – North America, a group which works to weaken American Christian support for Israel, and is a leader of Ithaca Jewish Voice for Peace.

You may recall that when I spoke on local progressive radio against the boycott movement, Gold called into the control room to complain about me in the middle of the interview!

Publicity, of course, was the real goal of the Code Pink protest. If all you knew about the arrests was the press coverage, you’d think that the arrests were not the goal, but the byproduct of protesting.

Much as the Pallywood fake or staged photo ops are used to gin up press coverage against Israel, however, so too were the arrests at AIPAC. It was pure Pallywood, arrests contrived for the cameras.

Don’t take my word for it.

A Legal Insurrection reader who saw our coverage of the protest sent along a video of Gold speaking at a post-arrest event, in which she admitted it was all a set up:

It was actually very difficult to get arrested. Quite seriously, I think AIPAC did not want the publicity of there being arrests, and it took us about two hours to get them to arrest us, because they tried every which way not to. We finally, after trying to move around and move around, managed to get in the doorway with the door propped open, where they would have no choice but to arrest us.

Gold and her Code Pink compatriots called themselves The D.C. Five, exhibiting more than a little self-aggrandizement. (The name is particularly ironic.)

The GreenStar fight will be interesting, with a professional organizer willing to contrive an arrest leading the boycott movement.

The Ithaca Coalition for Unity and Cooperation in the Middle East is a progressive-leaning group formed in Ithaca to promote peace, including opposing the GreenStar boycott of Israel.  Go like its Facebook page to keep up to date with developments.

You will be hearing a lot more about GreenStar. A lot. Stay tuned.

Hamas has taught them well. But then it’s easy to teach those that want to learn what is being taught.

Unity and cooperation in the Middle East? Quite a goal……they have been fighting each other for centuries and simply expanded the fight outside of their borders. I wonder if these women know anything at all about what kind of treatment they would receive if they lived in a caliphate.

I wonder if these women know anything at all about what kind of treatment they would receive if they lived in a caliphate.

What, you don’t think they would still be trying to get themselves arrested? They want to be martyrs, don’t they?