As part of drive to ban Israeli foods, falsely claimed Sabra Hummus was named for massacre, but pulled claim after complaints.

The group gained internet infamy when it shared on its Facebook page a disgusting photoshop of Nazi concentration camp inmates holding anti-Israeli signs. They took it down only after I wrote about it and people started complaining. 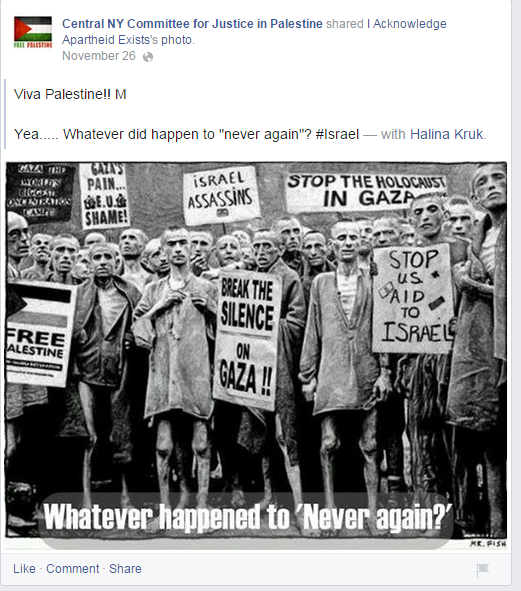 On February 1, the group is launching its drive to ban Israeli food products, particularly Sabra Hummus, from local stores, starting with the Greenstar Food Co-op in Ithaca. 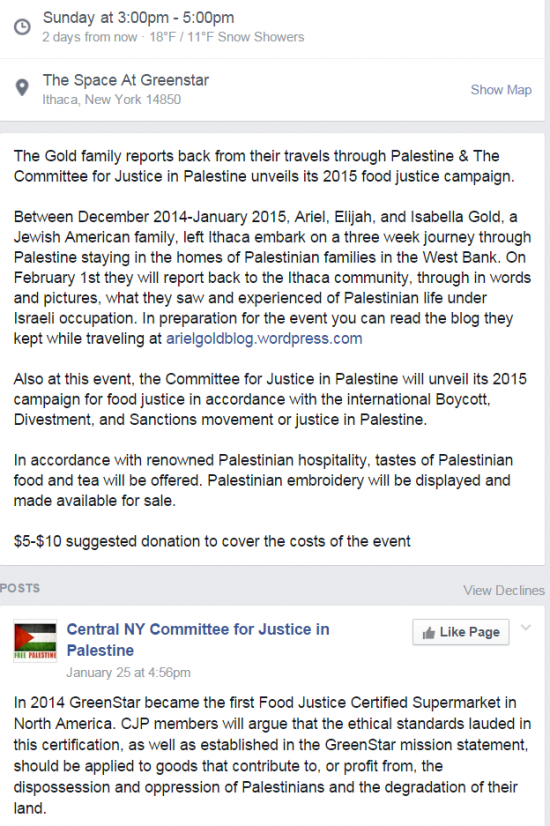 The group has had a table set up at Greenstar urging a Sabra Hummus boycott for months.

But now it is launching a formal campaign. As part of that launch, CNYCJP posted on its Facebook page a poster claiming that Sabra Hummus was named for the Sabra and Shatila massacre in Lebanon in 1982. In that massacre, Christian Phalangists killed several hundred Palestinian refugees; Israel was blamed for not preventing the massacre, but no Israeli troops took part. 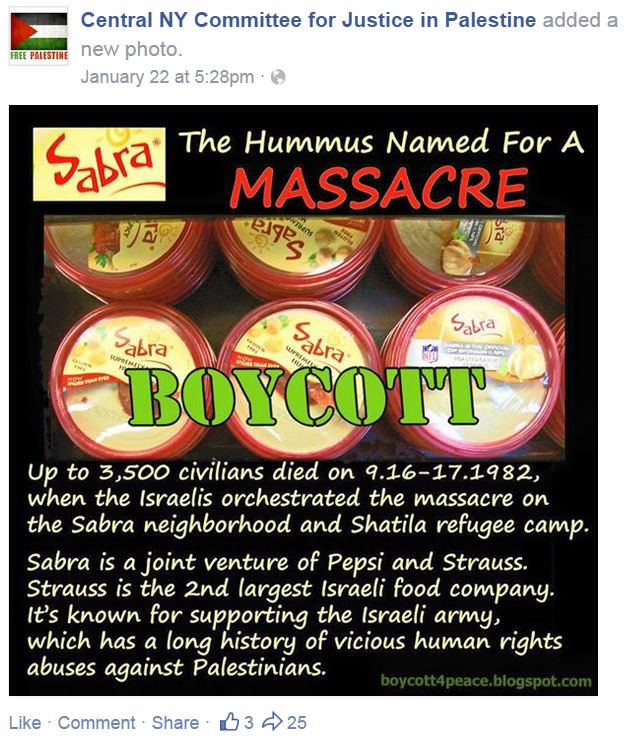 The claim is a lie, and a form of blood libel at that. Neither the name nor the history of the product suggest that it has anything to do with the massacre, and of course, the massacre was not done by Israelis.

As Elder of Ziyon pointed out in response to , Sabra is a term referring to a type of prickly fruit (rough on the outside, sweet on the inside), often used to refer to Israelis born in Israel as opposed to immigrants. That was particularly significant decades ago, where as now the vast majority of Israelis are native-born. Even Wikipedia explains the term:

Sabra is an informal term that refers to Israeli Jews born in Israel. The term first appeared in the 1930s to refer to a Jew who had been born in Mandatory Palestine or in Ottoman Palestine (cf. Old Yishuv). Since the establishment of the State of Israel in 1948, Israelis have used the word to refer to a Jew born anywhere in the historical region of Palestine (Eretz Yisrael), which today comprises Israel proper, Gaza, and the West Bank.

The term alludes to a tenacious, thorny desert plant, known in English as prickly pear, with a thick skin that conceals a sweet, softer interior. The cactus is compared to Israeli Jews, who are supposedly tough on the outside, but delicate and sweet on the inside.

Moreover, the product was started in 1986 in Queens, NY, by a company originally called Sabra Blue & White, with the colors representing the colors of the Israeli flag:

The company was founded in 1986 as Sabra-Blue & White Foods (Sabra being a nickname for an Israeli-born person and Blue & White representing the colors of the Flag of Israel).

There is nothing to suggest that the Sabra Hummus brand was named after the massacre, yet CNYCJP defended the claim when people called them out on it: 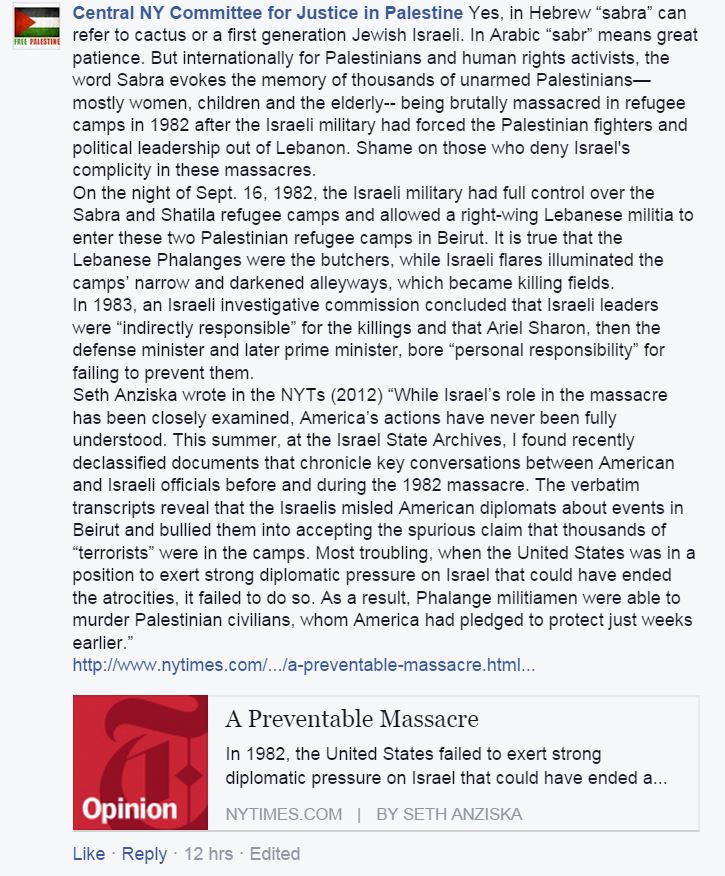 (The claims of Israeli responsibility are disputed and controversial, with a commission having found only “indirect” responsibility for failure to anticipate what the Phalange would do.)

After many more complaints were posted as comments on CNYCJP’s Facebook post, the claim finally was taken down today by Ariel Gold, who had originally posted it and who is one of the leaders of Ithaca Jewish Voice for Peace and CNYCJP: 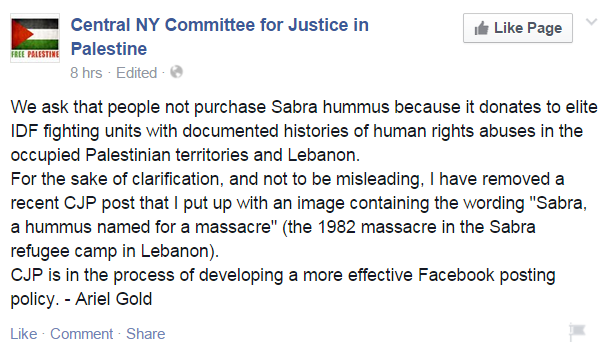 It’s good that they have backed off the lie about Sabra Hummus.  But as Elder of Ziyon further points out, it is a common lie spread by the BDS movement.

That the Greenstar anti-Israel  food boycott campaign started with a lie and stayed with it as long as it did says everything you need to know about the group and the Greenstar boycott movement.

You will be hearing more about this, for sure.

Sabra Hummus is great, love the taste and quality. The only brand that comes close is Tribe Hummus yet my wife likes Sabra’s flavor choices better than Tribe.

Now if Sabra also had a flatbread, for wraps, that was retailed in our area, that would make it almost perfect.

The massacre was carried out by forces loyal to the Gemayel family, in revenge for the assassination of the president of Lebanon, Bashir Gemayel, by the “Palestinians”.

In addition, Elie Hobeika, the commander of the forces who carried out the massacre, turned out to have been a Syrian agent all along.

In any case, there is no question that Israel played no part in it, and no Israeli had any idea that it was going to happen. The Israeli inquiry blamed Arik Sharon for not realising ahead of time that the Falangists, having just had their leader assassinated, were likely to do something like this.

Oddly enough no commission ever looked into the role of Bashir Gemayel’s brother and successor in the presidency, Amin, who was received throughout the world with full honors as a head of state by the same people who were happy to blame Israel.

I haven’t heard of this massacre in years. Last time I heard about it, Robert Fisk of The Independent was arguing that it really was done at the behest of the Israelis, I think. As if having their leader assassinated by a readily identifiable minority of a different religion was not any kind of cause.

It’s funny that Arafat named his “Black September” movement after the massacre of Palestinians by King Hussein’s Arab Legion soldiers in September 1970. Nobody on the Left and in “Palestine” even remembers that Arabs and other Muslims have killed more Palestinians than the Israelis.

Seriously, what does it say about the whole Palestinian movement that it has to be built on outright lies? Because it DAMN sure says something important.

Am I the only one reminded of the USSR when I see “Central” and “Committee” in the same sentence? The name suggests one of those front groups made up of Stalin’s “useful idiots”.

add to that the word “Community.”

Leftists, Progressives, and Democrats along with their suck-up, brainless Media co-harts use that word just as bullies use name calling.

You beat me to the similarity to Communist like slogan name. The Muslims in the West Bank and Gaza will come for the Jews first, only because they have been taught to hate the Jews. Strictly speaking, the Muslims should attempt to dhimmify the Jews, while killing off the real culprits – unbelievers like communists.

Someone at Barilla Pasta made a comment about gay marriage. There was much flouncing here in Nor Cal as a result, then the grocery stores put the product on sale. We backed up the truck to the loading dock (figuratively) and stocked up.

Stores are still selling it, though it’s not on sale anymore. We’re still buying.

If Sabra goes on sale be sure to show your support! The boycott will wear off soon enough, the important thing is to help Sabra and the store get through the short term.

Glad that you are exposing them for what they are. If no one stands up to them, then they will convince people their lies are truth.

The only brand I buy.

Ever since I first heard of the boycott, same here.

I bought my Sabra today.

Sabra Hummus is the OFFICIAL hummus of the West Texas Committee for Calling All Palestinians and Lefties Goat Smelling Faggots (WTCCAPLGSF), which meets nightly at The Midget Bar on Andrews Highway (in the back corner by the shuffleboard). All Jihadis and Leftists are cordially invited to come by for a beer, some hummus and chips, and a friendly game of Pin the Bacon on the Prophet.

“Economics is about (SELLING or) marketing ideology. Nothing else.”