The State of American Justice

The State of American Justice 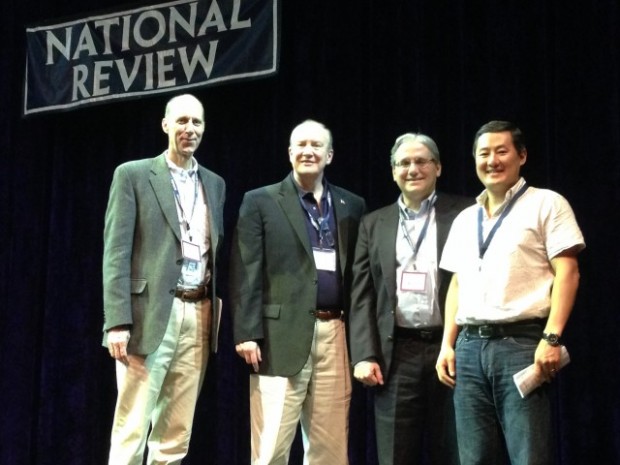 I appeared this afternoon during the National Review post-election cruise on a panel with:

The panel topic was The State of American Justice.

Unfortunately, there is no audio or video I can link to. But take my word for it, it was a good discussion.

We started out with a discussion of whether the newly Republican Senate should reinstate the filibuster rule for non-Supreme Court nominees. You will recall that the Senate Democrats eliminated the filibuster in November 2013 (went “nuclear”) at the urging of Obama allowing Obama to pack the courts with virtually any nominee he wants.  The discussion centered around a prior presentation by former Senator Jon Kyl who (according to reports, I didn’t hear it) advocated a return to the longstanding filibuster tradition which serves the Senate and the people well.

The clear consensus on the panel, articulated at length by Whelan, was NO UNILATERAL DISARMAMENT.

Harry Reid and the Democrats need to be taught a lesson — and that lesson should not be that they get to change the rules when it suits them, only to regain the benefit when Republicans take over.  This will be a fight early next year, and we need to bring some backbone to Senate Republicans.  The rule change doesn’t so much matter now, but in the event a Republican wins the presidency in 2016, why should Republicans not get the free pass Obama gets?

Other topics included the use of prosecutorial power for political purposes.  I spoke at length about that topic, discussing primarily the Wisconsin John Doe case we have covered here extensively, as well as the indictment of Rick Perry and the continuing investigation of Chris Christie.

Andy McCarthy described at length how the Holder DOJ was the most politicized in memory, and how the warning signs were there based on Holder’s performance in the Clinton DOJ.

We also covered the problem of the legal education system.  John Yoo made the point of faculty being entrenched, with little hope that change can come internally.  He pointed out that one of the worst things anyone could do is contribute to the general fund of a university, as it simply funds the continuation of the current state of affairs.

I pointed out how the Alexander Hamilton Institute for the Study of Western Civilization is a model of how we need to present alternative educational opportunities to students independent of faculty who will not give conservative ideas a fair shake.

On the issue of the Supreme Court taking up the Obamacare subsidy case, Yoo pointed out that this might be an opportunity for John Roberts to redeem himself after the disappointment of the Obamacare ruling when he (reportedly) switched sides after intense political pressure.  The political climate has changed, and while in theory the Justices should not take political pressure into account, in reality Justices read newspapers too.

The subsidy case revolves around specific language in Obamacare legislation that subsidies are only available on exchanges created by states. That would preclude subsidies on the federal exchange, which likely would collapse Obamacare.

I pointed out that the subsidy case was the perfect opportunity for the voting block against Obamacare plus Roberts to have some fun by starting their majority opinion denying the subsidies on the federal exchanges with a sentence like: “We hereby uphold Obamcare as written.”

All in all, a good time was had by all.

A disappointing set of subjects for an enticing panel on “The State of American Justice,” with the notable exception of the use of prosecutorial power for political purposes. Would like to have seen a video just to hear John Yoo; the country needs him back.

Your hear Yoo every month or so, along with the tremendous Richard Epstein, on the Richochet “Law Talk” podcasts. They might charge a little (I think it’s ~$3/month) but it’s well worth it.

I am going to guess everyone is in very high spirits on that cruise. You want the big wave before the cruise!

“…why should Republicans not get the free pass Obama not gets?”

So, Prof. the libations are flowing freely, are they…???

Prosecutorial misconduct and abuse for political purposes will continue until they are held PERSONALLY LIABLE for their harassment.

What’s gotten tough is the jobs market for lawyers. Gone are the days all you needed was a printed business card that you could drop on someone being transported to the hospital by ambulance. It wasn’t so long ago. And, the men were called “ambulance chasers.”

Sandra Day O’CConnor’s work has bitten the dust. (Except, of course, that she invented “forks” to solve problems.) And, she danced around Rehnquist’s head. Easily. By partnering herself with any four who wanted her to go along with them. And, this kept her choosing herself to write opinions; and not just get stuck in tax land.

Maybe, those battles are what changed the supreme’s?

I think Harvard is also to blame. Because Obama was given their credential. Just like the nobel prize, it’s not worth what it once was.

There is also a harvard black guy who lost. Higgenbottom? He wanted a seat on the supremes, but Clinton wouldn’t give him one. Instead, Ruth Bader Ginsberg got to sit on the bench; even though Sandra Day O’Connor was still there. So? More than one woman at a time. But it knocked Higgenbottom out of the running.

Decisions that are 5/4 can also be called “narrow.” Plus, sometimes, an old descent rises to the surface, and comes up being used by a new “majority.” Or worse. You get Kelo.

Mr. McTurtle is about to lead the GOP Senate for no other reason then he’s been the hack hanging around the longest. What a qualification.

Said McTurtle:
“I was particularly distressed about a deal apparently he’s reached with the Chinese on his current trip which, as I read the agreement, requires the Chinese to do nothing at all for 16 years while these carbon emission regulations are creating havoc in my state and other states around the country. The president continues to send signals that he has no intention of moving to the middle.”

Tolerate these losers hogging our victory and our party, and you can probably tolerate the democRATs taking back the Senate in 2016.

I suspect elected Republican Senators who have elected McConnell to the leadership over and over again since his first try, without serious opposition, may be in a better position than you to decide who should lead them.

McConnell and Boehner have both contributed far more to America, conservatism, and the Republican Party than the worthless whiners who sit around and toss ugly ad hominems at them from the safe anonymity of a keyboard.

As one worthless whiner to another (to use your ad hominem), let me suggest a few names (Lee, Sessions, Coburn, Inhofe, Scott, Risch) that I suspect could do a better job of leading a Republican majority.

“McConnell and Boehner have both contributed far more to America, conservatism, and the Republican Party than the worthless whiners who sit around and toss ugly ad hominems at them from the safe anonymity of a keyboard.”

Is it really possible you do not see the gross hypocrisy of your own words? You just tossed an ugly ad hominem from the safe anonymity of a keyboard.

I repeat. You are the absolute worst salesman for GOP leadership on the planet. If they knew of your posts, they’d ask you to stop supporting them.

The dem MA legislature did the same crap years ago. When ‘Reporting for Duty’ Kerry was running for preezy and Romney was guv, then current rules would allow Romney to appoint a presumably Republican senator if Kerry won. So the dem legislature changed the rules.

Fast forward to the death of Ted ‘The Swimmer’. The dem legislature changed the rules again to allow dem guv Coupe deVal Patrick to appoint an immediate replacement w/o a special election asap to help potentially in passing 0B0LACARE.

Anyway, the Pubs should keep the same rules that Reid enacted and stick it to them. Live by the sword, die by the sword.

I think the filibuster should come back only under one condition.

That Harry Reid and the Democrats agree to impeach and remove every judge they packed onto the bench that the Republicans would have filibustered had the Democrats not gone “Nuclear.”

Absolutely, it is useless or even counterproductive to restore the status quo ante for no cost to the Democrats in the Senate.

The ‘bad map for Senate Republicans in 2016’ the media carps about is based on raw numbers and the assumption that the 2010 wave freshman are all vulnerable. A closer look puts the biggest danger of losses at PA & IL because they are so deep blue, and of the purple states, Johnson in WI will have a strong challenge. Each will have some chance, though, and all could win.

The other purple 2010 winners, Portman in OH and Rubio in FL, seem likely easy winners. And that’s it. The winnable 2010 races that would have been hard to defend next time were lost in NV, DE, & CO.

AND – our skillful and wise Majority Leader will be forcing the ‘safe’ Democrats to take all those votes on popular bills and amendments from which Reid shielded them for three Congresses, on the record.

Obama, too, is far from finished showing the country why electing Democrats is a very painful mistake. Our chances are excellent for 2016, assuming we choose a well-qualified nominee and not someone who gets the monkey cages rattling but turns off the swing voters.

So keep the Reid Rule through at least two years of the next Administration. Roughly 200 federal judgeships come vacant every year. That’s a lot. We can slow Obama’s choices now, stop the worst – or even all if he chooses to go nuclear on immigration. Let’s make up some ground before we consider giving back any spoils of battle.

I have to disagree on Toomey (PA) as a hopeless case. While Corbett lost the governorship, PA voters put more Republicans in the legislature. The Dem bench isn’t that strong (our governor-elect spent millions of his own money to win the nomination)… McCord and DiPasquale are the only ones who come to mind as potential challengers. Watch McCord in the Penn State lawsuit and watch DiPasquale and how he handles audits of Democrats. He could do what the Real Bob Casey (now deceased) did to Milton Shapp to build his reputation.

Professor, in this picture you bear a serious resemblance to Richie Furay (Buffalo Springfield, Poco). Can we get some of their tunes in your Song of the Day???

We played some Buffalo Springfield in January 2012, and Poco in April 2014. We’ll replay them soon.