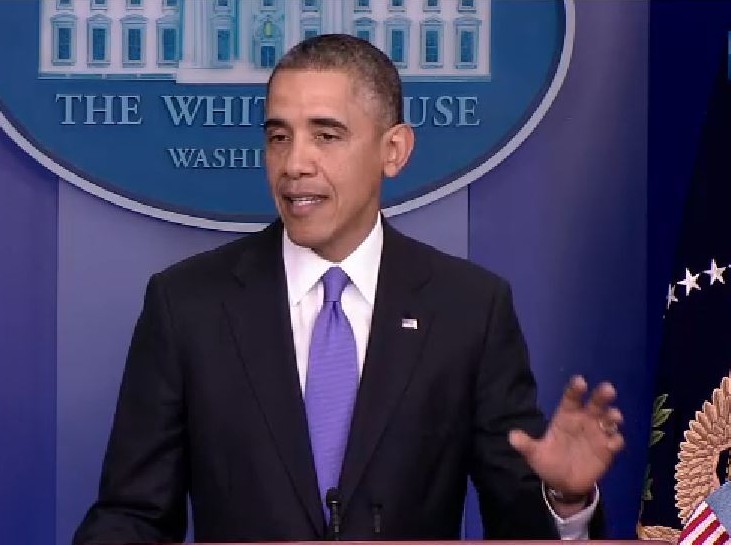 The Wall Street Journal came out with this report late yesterday afternoon that Obama Personally Lobbied Senators to Curb Filibuster:

President Barack Obama personally lobbied three Democratic senators who were unsure about a proposed ban on filibusters of presidential nominees, an 11th-hour effort earlier this week that reflected how much the White House expects to rely on executive actions to press its second-term agenda.

A Senate Democratic aide said Mr. Obama called senators who were on the fence and told them “how important this was to him and our ability to get anything done for the rest of the term.” The White House confirmed that Mr. Obama contacted senators but declined to say whom he called.

On Thursday, the Democratic-led Senate changed its rules so executive and most judicial nominees could be confirmed by a simple majority, rather than a 60-vote threshold needed to overcome threatened filibusters. White House officials now expect the Senate in December to confirm nominees for the U.S. Court of Appeals for the District of Columbia, a top housing regulator, the Department of Homeland Security and the Environmental Protection Agency who had been blocked by Republicans.

The White House believes the rule change’s primary value is that it gives Mr. Obama more scope to operate through direct administrative action, by removing barriers in Congress that denied him a full roster of officials.

Professor Jacobson speculated as much, in a post entitled Naked Emperor.

It’s not for nothing that Obama nuked the filibuster rule.  Yes, Obama.  Harry Reid would not have done it except with marching orders.

Others have commented on the issue of leadership.

That said, it may also be interesting to note one of the highlighted points in a recent CBS News poll:

The President has also lost ground on personal qualities like leadership and honesty, and most Americans don’t think he shares their priorities for the country.

No surprise whatsoever and y’awl can look forward to a lot more of the same between now and January 2015.

In my more than seven decades on this planet, I never seen a more corrupt, inept and sleazy administration.

A new day, a new revelation all of which tend to establish a new low…

Part of this lying frauds plan. This keeps up, the only way he will be removed is, with pitchforks. Dems won’t do it, neither will the Repubs.

While we are at it, we can remove many in DC.

Three plus more years of obama feels like an eternity. I cannot imagine the additional destruction he will inflict on our country in the rest of his term.
Further, while I have disrepected democrats for a long time, my feelings toward them have plummeted to new lows, as have my feelings toward the RINOs who cannot mount any sort of a defense of America’s traditions and values.

this “person” who was elected through fraud to govern a magnificent country has been true to his socialist belief system.

he does not deserve an ounce of respect from any American. But, what goes around……. he will get his.

No surprise at this news. Unfortunately the WSJ link is behind their paywall so I can’t comment on that.

How long before this applies to SCOTUS ? Legislation ? How about :

“The President shall have Power, by and with the Advice and Consent of the Senate, to make Treaties, provided two thirds of the Senators present concur”

OK, they can’t actually get rid of that one, but they can wait until the right moment with 54 D’s and ~ 20 R’s in the chamber (PRESENT), vote down all rulings of the Parliamentarian, and pass, let’s say the Arms Control Treaty, or ‘Rights of the Child’, ‘Protection of Women’, or any other UN Treaty.

It will take a Republican Triple Play (all three Houses) to undo it. Then the R’s won’t have the balls.

The Left says that people of color need a little extra help because of RAYCISM. Hence, then “special rooooles”.

And just where does this leave newly oiled & changed over ‘blonde’ Wendy down thar in Texas.

Up shit creek without a filibuster to peddle?

When you can’t persuade by reason or logic, you use force. Obama has never sought to persuade anyone of anything because he can’t. He’s an ideologue.

As a lawyer, he has no skills of persuasive reasoning or argumentation. He cannot mount that kind of assault against his enemies because that would require training in and the development of critical thinking skills.

Obama, from his teenage years onward, was indoctrinated into Communism. That stymied and stunted the growth and development of any critical faculty he had after the the chooms. So, all he has is the repetition of doctrinaire ideas.

Like the Hollywood crowd, he is a repeater of other men’s lines because he lacks the critical faculty to formulate his own. That is why Obama needed the Senate ratchet be broken. For, lacking the words, he must use force.

Do those Senators have any cajones? Why is the President telling the Senate how to run its own business and especially by a President while a legislator most favorite vote was “Present” !!!!?!

Is this a purge? I see this as Obama throwing the US Senate under the bus, or at least Democrat Senators from moderate to conservative states. The filibuster offered such people a way to have their cake and eat it, too. In the name of party loyalty they could say things to the party whip and the activists they will never have to defend back home because the nominee or the bill will never make it out of committee. Now they have to chose between loyalty to the President or representing the people in their states who elected them.

This is the communist way…simple as that. McConnell and Boehner are disgraces and must be replaced by a new generation of republican leadership. Before Obama, we used to say, “It can’t happen here”. With Obama, we have been saying, “Look what just happened!” Let us look forward clearly with eyes that see and minds that think. Once the communists are in….they don’t willingly leave. Cuba, Czarist Russia, Mainland China, Brazil, etc, etc.
Every single thing this regime has touched has been degraded. This isn’t going to end well, folks. Brother frogs, this here water is boiling and we is gumbo. Good luck to us all and may God save our beloved country.

[…] to The Wall Street Journal, as quoted by Mandy Nagy in a report over at Legal Insurrection [tip of the fedora to Jeff […]

yep, that’s our hypocrite in chief out there working.