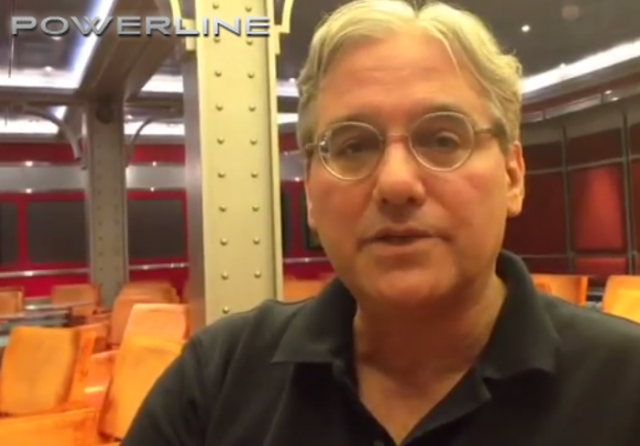 Today was the first full day of the National Review post-election cruise.

As longtime readers know, for many years I didn’t do conferences. My first conference was the Breitbart Awards in Providence in 2012, because it was so close to my then home in the State of Rhode Island and Providence Plantations.

That experience of meeting bloggers I only knew from the internet convinced me that I needed to get out there more. So next was CPAC 2014.

When Jack Fowler, publisher of National Review, kindly invited me to be one of the speakers on the cruise, it was a no-brainer.

I’ve been pleased that some of the attendees I’ve met are readers of, or at least have heard of, Legal Insurrection. I’m always shocked when that happens.

I’ve also met many writers I’ve followed over the years.

My wife and I ran into Scott Johnson from Power Line blog, and had a great talk. Power Line, of course, is one of the premier, research-rich websites.

Since our founding in October 2008, Legal Insurrection has thrived due to the kindness of strangers. Scott and fellow Power Line blogger John Hinderaker have been among the most kind strangers to us, frequently linking.

Scott’s no stranger now, and was kind enough to ask me to sit for a short video to help introduce Legal Insurrection to the Power Line readership.

How great is that? In an age where corporate websites increasingly seek to retain their traffic and not spread the links, Scott offered to help a smaller blog gain exposure.

If you want to read all about it, and see my video interview, you have to head over to Power Line, An Introduction to Legal Insurrection.

Oh dear… I’ve never heard you speak before. It makes SENSE that you have a nu yoke accent, but I never see it in your writing like so many other East Coast and Proud writers do. Not a bad thing… but I wasn’t expecting it for some silly reason.

I have an accent? I never realized.

Yep. Accents is what other people has. Me? I ain’t got none. Naw-sir. None a’tall. 😆

Call me Sergeant Pepper if you must, but I have to pull rank here. I studied linguistics at the University of Hawaii for a semester.

Not NYC, to my ear. I hear the flat vowels, which extend across the upper tier of states clear to the Pacific, and the cadence which is also typical of the northern states. Very pleasant “salt of the earth” speech.

PowerLine and LegalInsurrection are both must-reads for me. Best blogs on the net.

I used to read Powerline every day until they started disrespecting Sarah Palin and other conservatives. Screw those guys.

I read them both every day. If you want to be informed they’re indispensable.

I follow them both, but PL seems more arrogant, and they use FaceBook for commenting. I don’t know why they think that the sort of people who would read their blog would want to be anywhere close to FaceBook. FB is one of the big offenders when it comes to privacy.

I believe I “found” LI through a link from PowerLine.

It took Prof. J. moving to my neck of the woods to put L-I on my top 4 blogs after looking for conservative groups/clubs at Cornell/Ithaca College when Prof. J and L-I popped into my life. Between College-I and Legal I., it wound up being a BOGO. Esp. love Saturday A.M.’s and coffee with all the great links and posters. Both are the best and getting better all the time.

That’s some feather in your cap, Professor.

In a year or two, when you’re one of the most famous bloggers on the planet, we’ll be able to say “I knew him when…”

Pretty cool guys for being from Minnesota.

They tweak the Star-Tribune at least as well and as often as Patterico vivisects the LA Times.

And Keith Ellison X Muhammed, or whatever he is calling himself these days, gets a good work-over, too.

Tremendous, Professor. You, LI, and CI can’t have too much visibility. The very image of a pillar, well, couple of rivited I-beams, of strength!