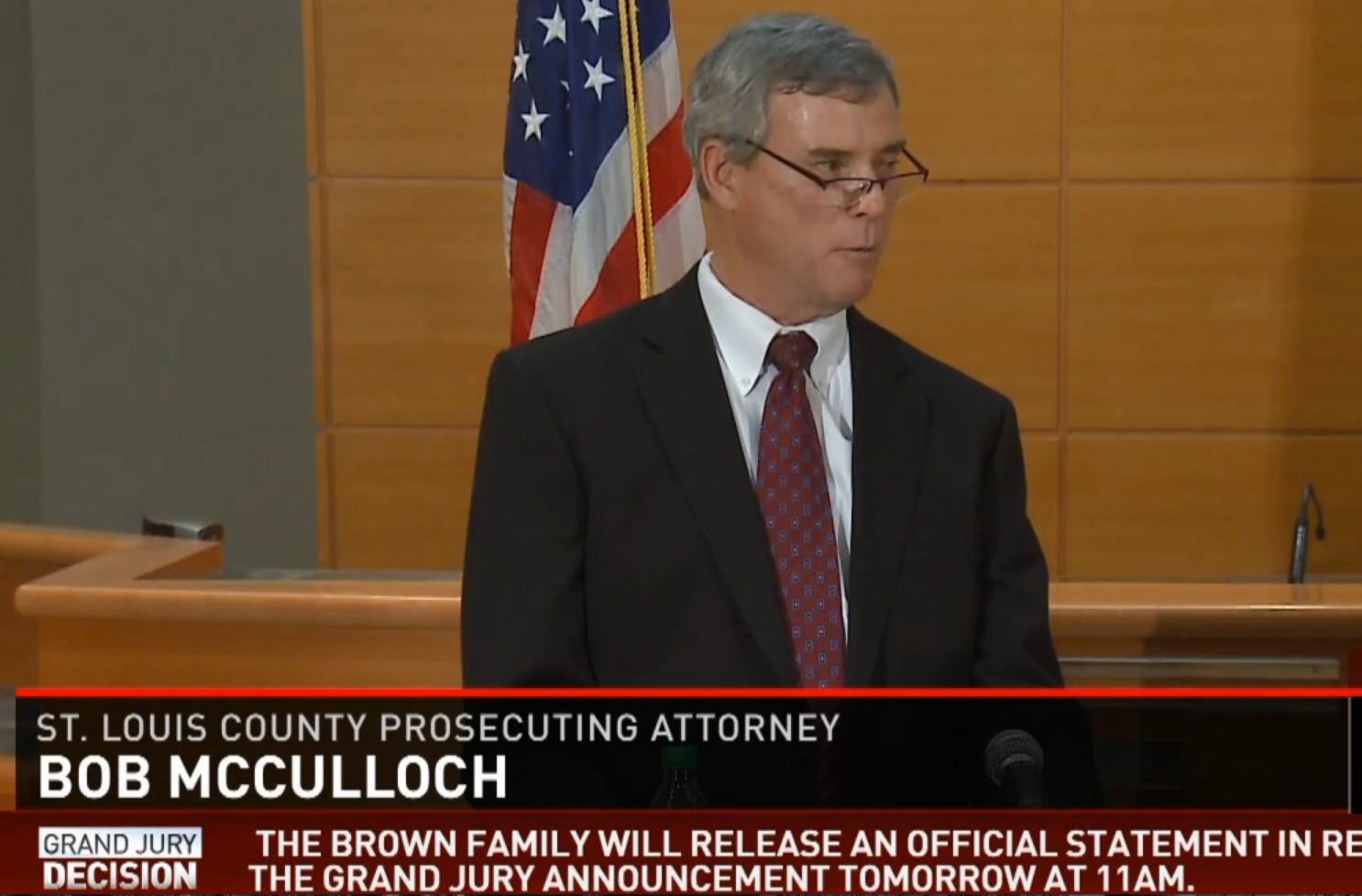 As has been widely anticipated for weeks, the Ferguson MO Grand Jury has DECLINED to indict Police Officer Darren Wilson in the shooting death of black adult Michael Brown.

This result has not been unexpected, as the overwhelming weight of both the eye witness and forensic evidence has been entirely consistent with Officer Wilson’s narrative of self-defense, including:

In contrast, the narratives put forward that might have favored an indictment were serially changed as each was proven inconsistent with the evidence:

Underpinning all narratives of malice on the part of Wilson is, of course, allegations of racism, both on the part of Wilson and the Ferguson Police Department generally.  It had been widely reported, however, that more than a half-dozen black witnesses testified before the Grand Jury in a manner consistent with Wilson’s narrative of self-defense.

Further, Wilson himself appeared before the Grand Jury and testified for over four hours, without the benefit of legal counsel.

The Grand Jury’s own racial makeup is 9 white members and 3 black members. It takes a super-majority of 9 members to return an indictment.

The weeks following Brown’s August 9th death were filled with violent protests, including looting, rioting, and arson, with over 100 local businesses suffering financial loses as a result.  Protests of a lesser degree of violence–including protestor intimidation of local black politicians, attacks by black protestors upon white protestors, and bounties offered for Officer Wilson and his immediate family–have continued ever since.

Fear of renewed violence and property destruction following the Grand Jury’s decision are pervasive throughout Ferguson, with even local black-owned businesses boarding up their shops.

It has been widely anticipated that the Grand Jury’s expected no true bill would re-ignite the violence of the early days of the protest.  In preparation, MO Governor Jay Nixon (D) has declared a state of emergency and activated National Guard units, and local police departments throughout the state, and across the nation, have made preparations to deal with the anticipated disorder.

The immediate response of protestors to the Grand Jury’s decision has been . . .

It remains to be seen whether Protestors will adhere to their stated desire to simply “be heard” or whether they will once again resort to mob violence.  The fact that protestor ranks have been filled with professional protestors, such as Occupy veterans, trained for and committed to the substantial disruption of the communities they infest does not bode well for the safety of the people and property of Ferguson.

Some hope for minimized violence rests upon the unusually cold temperatures forecast for Ferguson in coming days.  Both common sense and scientific research support the notion that the frequency and intensity of riots correlates directly with increased temperature (thus declining with colder temperatures). See: Should weather dictate timing of #Ferguson Grand Jury Report release?

I REALLY hope the good people of Ferguson…and there are LOTS of them from all reports…can get back to the business of simply living according to their own lights.

Now, since Mr. Johnson attacked the police officer, are they going to press charges against him?

Whatever happens, unless this guy uses these events (Scrooge-like) to reform himself, can you imagine he will live long or prosper?

Seemed like a very good presentation that should convince many more doubters, that maybe the system really did work.

The audio of the shots, then the pause, then more shots when he continued the charge, means Brown was pretty intent on the attack. And of course the shots in the vehicle.

And that the officers seemed to realize these were the robbers. And several black witnesses corroborating.

I don’t expect much rioting. Any “black activists” that still demand an alternative outcome will be perceived as just divisive. No we’ll see if Obama tries to reignite the flames of anger, or calms things down.

well your expectation has been wrong. There is looting and rioting, stores set alight, and police cars set alight. What do you expect when the anarchists and Marxists plus the rest of them are intent on causing riots?

Wow, Obama looked pissed during his remarks, lol. Of course his remarks came down to, racism and evil police, but I wasn’t expecting much else.

Impotent or incompetent (or incontinent)

Thank you Rick.
“comprehensive reform of the criminal justice system?”

The MSM and their politicians have been responding as if there should be affirmative action in our criminal justice system.

We have years of data using affirmative action in various areas of our society.

I am following the “Asian” action against it in CA, that will be interesting.

Now might be a very good time to address it’s application going forward.

Confusing any kind of activity, any kind, with accomplishment.

BO says anger is an understandable reaction to the grand jury’s decision. Wrong. It is an irrational and racist reaction. And he’s too big a coward to lead in any meaningful sense of the word. He WANTS racial animosity to persist. There can be no other explanation. He has zero interest in ‘bringing us together’ or ‘healing our wounds’ or a ‘post-racial America’. He’s no better than Al Sharpton. And that guy’s scum of the earth.

With Obama it’s all about getting votes for the Democratic party.
He simply doesn’t want to piss off the voting base.
He needs to rile them up to get them to vote the “right way”.

It said that he had an accomplice named Dorian who also attacked the officer? I had no knowledge of that. Good Lord, those guys were nuts.

How common (or uncommon) is it for the subject of a grand jury investigation to appear and testify at such a hearing? I’m a lawyer in the Marine Corps and ours are structured differently with the accused present and represented by counsel (the hearing is called and Article 32). Is it unusual for Officer Wilson to testify in this case or is that par for the course?

So what does this mean?

It means that the police officer took the risk of being questioned under oath without counsel present. He waived his right to assistance of counsel.

I don’t think that it was a much of a risk as it would have been for a non-LEO. His testimony before the GJ was strikingly similar to what he said a day or after the incident in what appears to have been a reenactment. Wilson said things almost exactly the same both times, often using the same words. While that could just be due to a very good memory, it could also mean that he had his story down (early) and was going to stick with it.

Still, there was enough information in his testimony, and it was corroborated, as far as I could tell from other sources (such as the forensic evidence, medical records, etc.), that I found it highly credible. I would suggest that anyone interested in what really happened that day start with his early statement and his grand jury testimony.

I’ve heard from an attorney on a radio program that Officer Wilson had inconsistencies in his testimony regarding the number of times he fired his weapon. I was trying to find this online but was unsuccessful. Possible rumor. Social media is on fire with rumor/meme manufacturing.

Wilson testified before Grand Jury that he couldn’t REMEMBER how many times he fired. Almost NOBODY in a life-or-death fight DOES, and when they DO they’re generally WRONG.

Nothing says “social justice” like violent criminal Michael Brown trying to take down a police officer doing his job, and then having the hideously racist Obama/Holder Justice Department doing the same.

The witness statements are devastating. It appears the media only interviewed witnesses that were easily proved as liars. How the progressive media can look any more stupid and wrong is something to be considered. Crump must be disbarred as he is a very dangerous liar.

I haven’t had a chance to dig through them yet – I suspect that few outside the investigation have either. We are talking 24 volumes of GJ testimony, 22 additional reports (autopsy, radio traffic, etc.), and maybe 32 interviews. A lot of information wade through. Crowd source anyone?

The interesting thing though to me was the DA last night pointing out that a lot of testimony changed throughout the investigation, invariably to Wilson’s advantage. Likely, I expect, when those witnesses had perjury explained to them.

If you put them in Sarah Palin’s trash can and tipped off a JournoLister or two, you’d have the investigative forces of ABC, CBS, NBC, CNN and any number of Leftist blogs onto it before you could say “boo”.

Ferguson Prosecutor Robert McCulloch Conference, the evidence before the grand jury, and the differences between the media narrative and the evidence, and differences among testimony of the witnesses.

Well, not to worry, there’s always the civil suit to look forward to.