Black #Ferguson Shop Owners Board Up Shops In Fear of Protestors

Black #Ferguson Shop Owners Board Up Shops In Fear of Protestors 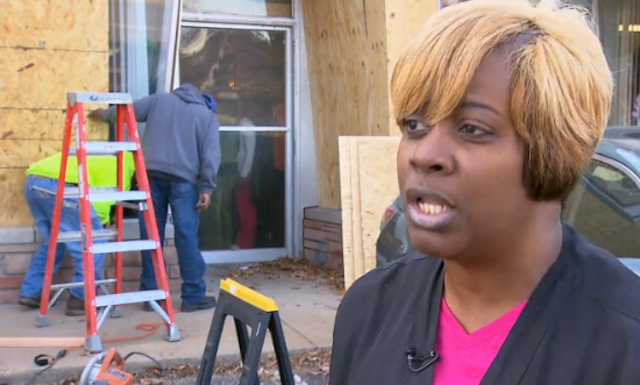 On airport televisions nationwide a news agency known as CNN is reporting that black shop owners near the site of ongoing protests in Ferguson MO are boarding up their shops. The reason? Fear of losing their businesses to renewed rioting, looting, and arson following the anticipated decision of the Grand Jury to not indict Police Officer Darren Wilson over the shooting death of Mike Brown.

Local black hair shop owner Constance Garnett is boarding up her shop.  She fears the loss of the business it took her 11 years to build to a few angry hours worth of petulant, violent rioting:

Meanwhile, a white manager at an nearby gun store delivers an Oscar-worthy performance when he manages to keep a poker face as he describes that sales of guns for personal protection are up 50% thanks to the local unrest. And, he adds, a lot of those people are first-time buyers, thus expanding the shop’s customer base:

The cognitive dissonance must be overwhelming.

Input: Protestors rage for months over a black man shot and killed by a white police officer, even as that officer is subject to a grand jury and prospective criminal prosecution.

Output: Black businesses boarded up by their owners. White businesses increasing sales by 50%.

“The unintended consequences fairy was unavailable for comment.” He/she/it is way too busy these days to speak to the media.

This is how it always is; the criminals hurt the people in closest proximity to them worst, and often only. Their neighbors who are trying to do the stuff that breeds success are the victims, along with the vast majority of other people around them who are trying to make a living and go about raising families and minding their business.

The interests of the local citizens have been totally lost in this fraudulent political game, because this administration does not care about the rights of individuals.

Gone are the good old days when you could buy CS crystals and spread them on the sidewalk to deter looters. Anyone walking on them dispensed noxious, chocking clouds of CS gas, the residue of which clung to their clothes and “kept on giving” until they changed and showered and probably burned those clothes.

Turns out Pakistani money and maneuverings is behind the ‘Anonymous’ mask and voice inciting the Ferguson mess. No wonder the @Ayatollah has been piping up about racism and human rights (kid you not) in Missouri. There have been bearded agents on the ground in Ferguson claiming to be Hamas operatives. The whole thing is pathetically transparently black muslim Islamist-augmented.

Then there is the typical Crump/Sharpton MO: make up a false narrative and stick with it.

Did you know the Ferguson Market owners had been charged with money laundering, funding terrorism, bribing a police officer to give them information to help keep Islamist ‘students’ in the US past their visa expirations?

Same sort of people as Trayvon’s folks. Unbelievable that these people have been carted to Geneva to speak to some human rights group there.

The UN, Nobel Peace prize and human rights endeavors are now nothing but meaningless Islamist propaganda.

Sorry about the grammar typo – it’s *are* behind the Anonymous. In the heat of typing, I forget to edit.

Fortunately we can count on Obama/Holder/Sharpton to calm the racial tension, explaining to “their people” that “the system worked”.

Obama will address this directly: there were many black witnesses that observed Brown assault the officer, then when ordered to stop, he turned and charged the officer again. The already injured Officer Wilson had no choice but to use deadly force before the gentle enraged 300 pound man crushed Wilson into his cruiser. Claims that Brown had his hands up and was surrendering are not supported by fact.

Then Holder will come to the podium and explain: “the system worked” and I found no grounds to believe racism played any role in this regrettable but necessary use of force. I apologize to Ferguson and the nation for inciting riots and looting with my earlier irresponsible comments.

Then Sharpton comes up: “Hey, my road to wealth and notoriety depends on stirring up racial animosity, but please don’t destroy this black neighborhood …”

Well … I can dream that at least they won’t come out and call for more looting, but Obama will inject himself in this somehow, probably on the wrong side. The polar vortex is upon us … now is a good time to announce the no bill.

Just think what it would look like if Barracula, Sharpton, and Jackson cared about individual black Americans as much as does the average TEA party person.

It would be a completely different America.

“Just think what it would look like if Barracula, Sharpton, and Jackson cared about individual black Americans as much as does the average TEA party person.”

It would look exactly the same as it does now – “Screw you, I got minie!”

You could not be more STUPIDLY wrong.

But that has never been an impediment in your comments.

TEA party people want everyone to succeed, and we understand that another person’s success in no way threatens ours. Rather, it enhances our general standard of living.

Ha … well I’ve been self employed most of my life. But a post painting what could be done to defuse this, seemed like a worthwhile effort. 🙂

Christmas is coming and baby needs a new pair of shoes [for free].

Of course black owners are boarding up their businesses. Why wouldn’t they? They’re not stupid. I imagine even those planning to riot themselves are taking precautions to protect themselves and their property from their fellow rioters.

I mean, it’s not as if they can just put up a sign saying “Black-owned business; please leave us alone”.

One of my customers also owns several convenience stores and gas stations around urban Houston, mainly in the east end and Fifth Ward.

He told me that his mark-up of 20-25 percent is to offset the rampant theft, tampering of product and shoplifting that goes on in his businesses. He tells his clerks just to call the cops on shoplifters and not try to detain or subdue them. No surprise that most are long gone once the police get there, and even those caught never show up at trial or, if merely ticketed, pay the tickets.

It’s literally a no-win, except for the fact that most businesses have already pulled out or use his same business model. He’s told me on several occasions that if there was ever riots here that destroyed his businesses, he’d never rebuild, because even with insurance, cost recovery is never close to total. Also, many policies do not cover such acts, without a special rider.

yeah … the tea party versus Obama’s America is not “screw you I got mine” versus “let’s all share everything equally, and certain ‘minorities’ are more equal than others’ btw”.

It is “liberty will reward the diligent, who still offer liberty and justice for all”.

“if you want more, take it by breaking into stores that serve your community, because Obama/Sharpton say white cops act stupidly, and even a stoner, robber, assaulter of cops … must be treated as a hero because he is black.”

That’s my free analysis, maybe Rags’ was more succinct, or Henry could give more psychological insight. 😉

that was meant as reply to Chem Geek comment above.

I’ve had a thought or two relative to Loretta Lynch’s comments about how “dreams are never realized”.

He had a dream…one many of us have shared for decades…that had a definite realization, and one that all of us could and did appreciate. A dream of a nation where the law and culture would not care a whit about the color of a person’s skin, and would look solely to the content of their character.

Every one of the TEA party people I know subscribe to that dream. We will fight for the kind of nation where skin is NOT a factor in favoring or disfavoring anyone. Where nobody is given a pass or a boost on the basis of ANYTHING as superficial as the shape of eyes, the color of skin, the person they love (or schupe), their last name, or where they or their parents came from.

In other words, NO discrimination EXCEPT on the basis of individual merit, since we will always…and should always…discriminate in making choices.

The Collective INSISTS on racial and other forms of discrimination, and, according to people like HOlder and Lynch, they ALWAYS will. Because “dreams are never realized”. And they ALWAYS will use the law and every other means to support their discrimination, and they will ALWAYS tell the despicable lie that some of us are due to be discriminated FOR or AGAINST on the basis of race, ethnicity, who their parents were, the shape of their eyes, and who they love (or schupe).

yeah, the racism of Obama/Holder/Sharpton is obvious yet America is in denial. “Blacks cannot be racist” is their absurd position. So AG Holder being an activist (racist) against the Ferguson police (or Zimmerman) with NO basis, is perfectly fine.

“At the end of her speech, Lynch ridiculously tries to tie her battle to stop voter ID laws to Nelson Mandela. I guess she didn’t get the memo. Mandela supported and put into place strict photo voter ID laws in South Africa.”
http://www.newsmax.com/Newsfront/Loretta-Lynch-attorney-general-nominee-video-voter-ID-laws/2014/11/10/id/606374/

The Mandelas were no MLK, as they oversaw the torturous slaughter of more blacks than apartheid ever imagined. Those whites fought against ANC communists and thugs, in the muck of what is revised to be pure racism.

Now white farmers are murdered, and whites live in razor wire compounds and must travel with security. The Mandelas cared less about “racial equality” and most about being the new dictators. Barack’s own brother thought his Kenya would have been better off if they had more intervention from the whiter developer Brits, as countries like South Africa did. Kenya warred while S Africa developed.

Winnie’s famous necklace torture murders and their ties to the communists are nearly forgotten as only the “evil apartheid” gets media attention.

The Mandelas oversaw thousands of black on black murders, yet our next AG and most of American media see them as heroes, right up there with MLK.

Mandela was in prison for being a domestic terrorist in cahoots with the communists. That is NOT what we like about MLK, even though MLK was not perfect either. Schools really need to dump teaching of PC Religion. That might put a stop to Ferguson style malarky.

And people like Barracula and HOlder tell the lies that fill kids like Brown with resentment and hopelessness, and then give them permission or special dispensation to be thugs.

We gotta break that cycle, somehow.