“I was completely surrounded, getting cussed at, yelled at, hollered at.” 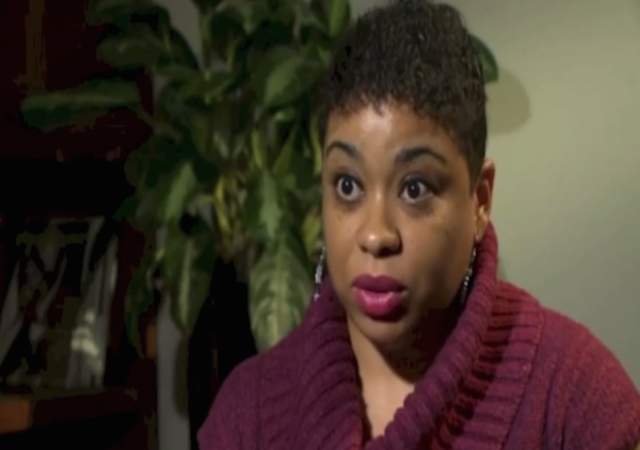 NBC affiliate KDSK is reporting that Ferguson Committeewoman Patricia Bynes claims she was targeted for physical intimidation by protestors while attending the protests herself. Bynes specifies “Lost Voices” as the group that sought to intimidate her, one of many protest-related organizations currently in Ferguson.

Democrat Committeewoman Bynes (pictured above) is black, as are the leaders of Lost Voices interviewed for the KDSK story.

Bynes described being surrounded and intimidated by Lost Voices members, and says they demanded that she stop speaking to the media about their group.

“They wanted me to stop talking to the media about them, and it was basically done to try and bully me. But it didn’t work.”

In the interests of helping the reader evaluate the relative credibility of Committeewoman Bynes and Lost Voices, I present for your viewing pleasure a bit of video from Lost Voices’ own Facebook page, which they indicate represents the nature of their activities while protesting.  This video is most definitely NSFW, if only for the repetitive shouted curses (e.g., “FTP: F$#k The Police!” ad infinitum). At about the 4:15 mark you can enjoy the sight of water bottles being hurled at police standing quietly across the street:

And thus the Ferguson protests have entered the terminal phase of all Progressive movements:  eating itself.

Before that final inglorious end, of course, the general expectation is for one last great burst of protest violence in response to the anticipated decision of the Grand Jury to not indict Police Officer Darren Wilson for the shooting death of Mike Brown.  Local residents are making appropriate arrangements, ranging from boarding up their businesses to achieving record sales of defensive firearms.

It should be quite the show.

“I’ve seen agitators surround a police vehicle and kick and punch it while an officer was driving it.”

“I’ve seen them (LEO) not respond to multiple instances of rocks, brick, glass and bottles being thrown at them.”

“What is not known is the number of times I’ve seen them (LEO) show an incredible amount of restraint. ”

I would say that this committeewoman has more than just credibility. She has moxie. I hope she remains unharmed.

I’m guessing targeted incumbents might get a patrol car in the driveway for a while.

It is reported that it was memebers of Lost Voices that beat Chris “student” Schaefer.

I hoping for a robust fireworks display to commemorate Fergustan’s “protestors” during their final chorus of racial outrage.

(housekeeping note to Andrew) In your CV/bio thingy at the end of your opening posts you start with “Andrew F. Branca is an MA lawyer …”

Since it’s attached to all your opening posts, I thought you might want to correct it. 🙂

If you expand “MA” to “Massachusetts,” then “…is an Massachusetts lawyer…” does look incorrect, or at least awkward. If you read the letters, “…Andrew F. Branca is an Em-ay lawyer…”, then “an” is correct, as it preceeds a vowel.

The Lost Voices of the FTP lynch mob are ranting, calling for more blood shed, rioting and looting – their version of my brother’s keeper “social action.”

Some will stand up and say “No” to their lawless demands and defend the innocent.

The rest, the unjust, will personify “ignorant voter” status and remain silent, destroying what’s left of their humanity. The rest include AG Eric Holder and Comedian Al Sharpton.

The nighttime lows for next Monday and Tuesday are forecast to be in the 16-19F range.

I’m told by sources I trust that liquid dihydrogen monoxide sprayed from high-pressure hoses tends to rapidly become a solid at those temperatures.

‘I’m dreaming of a white Christmas.’