Separate bounty of $1,000 offered for any of Wilson’s close family members 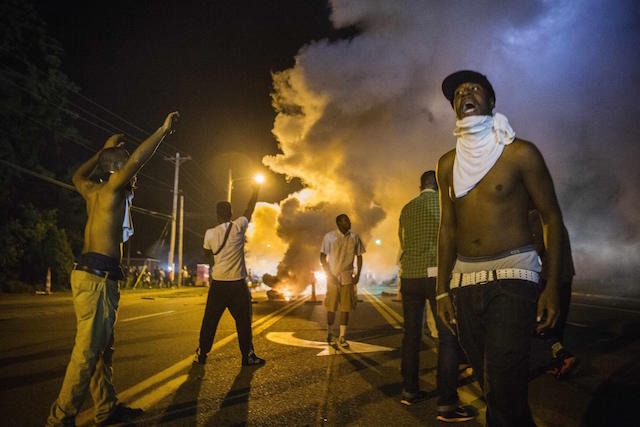 The blog Gateway Pundit is reporting that a self-described Pan-Africanist group has put out a $5,000 bounty on Ferguson Police Officer Darren Wilson.

Wilson is, of course, the police officer who decisively convinced the 292 pound adult black male Mike Brown to cease his violent attack upon the officer. Brown’s death led to days of riots, looting, and arson, followed by months of ongoing violent and inflammatory protests.

Apparently dissatisfied with the $5,000 bounty on Wilson himself, the same Pan-Africanist group has broadened the appeal with a $1,000 bounty on any of Wilson’s close family members.

I presume the FBI are on the case – with the full backing of the AGOTUS. Or has the rule of law gone AWOL in the US of A?

How is this not construed as an illegal threat?

How would it be legally speaking construed as a threat? It has none of the elements of a threat. It’s an appeal, and offer to pay for, information. It’s legally no more a threat than going to a private investigator and asking them to find the same info.

Its a bounty and it is illegal, plain and simple. Just like the Bounty that was offered for George Zimmerman.

It’s almost as if they think their plain language takes away the obvious criminality.

Intent matters, and no reasonable person would believe that this group wants the location of Wilson, nor his immediate family–HIS IMMEDIATE FAMILY! What do THEY have to do with Mike Brown?–for anything other than violent intent.

They have no possible lawful reason for knowing this man’s location, much less to offer $5,000 for it, nor especially the location of his immediate family, nor to offer $1,000 for each of those.

It does take away the criminality. To be illegal, a threat has to be explicit and serious; here it is not even implied, even though everyone understands it.

“They have no possible lawful reason for knowing this man’s location”. Idle curiosity is a lawful reason. They don’t need anything more. This is a free country, and unfortunately that means mafiosi and other gangsters have the right to procure the information they need to commit crimes. To make it illegal the state would have to be able to prove that there was a conspiracy to commit a crime, and that the intelligence-gathering was done in furtherance of that conspiracy. And that’s practically impossible to prove.

(Snaps fingers) Gee, you’re probably right! No doubt they merely want to invite him to a birthday party – or perhaps a wedding ~

How would you prove otherwise?

Remember that it is established law that it’s lawful for union picketers to take down the names of those who cross the picket. Everyone understands the purpose of this activity, and it’s certainly intended to intimidate, and yet it’s perfectly legal because there is no actual threat of violence.

What “case”? It’s not illegal to offer money for information.

When the gubmint is releasing convicted illegal felons from jail, what rule of law? Isn’t this discrimination against the American felons in jail?

“Ask a few questions” – punctuated by lead, no doubt ~

No doubt, but impossible to prove.

Oh, it was Zimmerman’s bounty and now this.

A fuc*ing NFL defensive coordinator and head coach offer bounties for putting opposing players out of a game, and the world is turned upside-down and the coaches are suspended for a year. Even the POTUS weighs in gravely on this.

Gang of thugs puts out a bounty on a police officer and “close family” members and no one says sh!t.

Maybe this is a priority question for Obama’s AG nominee…..

Read off the Bounty on Zimmerman by the NBP’s

Then read off this one

Then ask how Lynch plans to proceed on prosecuting

I am so jealous that I didn’t come up with this fine comment. Very well done.

“To ask him a few questions” is not a direct threat of violence, so there may be little law enforcement can do at this point. If Wilson is found and murdered then these people and anyone assisting them could be in serious legal trouble. They don’t seem to care about that. It is frightening to think that a police officer who appears to have merely defended his life against a violent attack could be tracked down and murdered.

We can hope this is just big talk.

I notice there’s no contact information on how to collect the bounty if you come in with a head.

Oh, I am sure they will be happy to give you a check – just hold it until next Friday, mmmkay Home?

No, even if they are found and murdered, those offering this bounty are still in the clear unless it can be proved that they passed the information on to the murderers, knowing what they planned to do. If, for instance, they merely broadcast the information to the world in general, and the people ended up murdered, there is no crime to charge them with.

I don’t know about this one Andrew. This feels “Troll-esque” to me. Like somebody’s playing the media to see how much they can incite panic that “there’s a bounty, law is breaking down!!!!!”

Oh, sure, they’re just attention whores. But if this is how they seek attention, let’s give it to them with both bores.

Clearly they have no beneficent motive for seeking to “locate” Wilson.

They don’t think he’s lost and in need of rescue.

For what other reason would they pay for knowledge of his location?

However many people in middle America might have been mislead by the media into thinking there’s a serious possibility that Brown was murdered by Wilson, very few of them are going to agree that having Wilson hunted down by an enraged mob constitutes “justice.”

And by and large it’s THOSE people who are paying the bills for THIS nut job.

What if someone slipped them the address, but it really wasn’t Wilson waiting, but someone who had just stocked up at Metro Shooting Supplies in nearby Maryland Heights?

Sort of a reverse SWATing, if you will. You’re devious, and I like it.

Can we post a bounty for disclosing Little Spike Lee’s home and cell phone numbers? I do not want him to experience any physical harm, I just want fans to have a way to express to him what they think about him.

Better yet, try to claim the Darren Wilson bounty by giving them the Spike Lee address.

They were disclosed. Multiple locations of his various residences on multiple forums after he fouled up by posting the wrong address of Zimmerman. They are all available from tax and other public records anyway with a little research.

That’s nice, but very few actual Africans are Pan-Africanist. Look a bit around Africa, and it’s easy to understand why. The Magreb is trapped in Jihadist turmoil. West Africa is a disease-wracked, Third-World cesspool. Central Africa is no better. Parts of Eastern and Southern Africa (Zimbabwe especially excluded) are trying to climb into modernity. If I were running Botswana, for example, I would want to continue promoting economic growth and stay as far away from Pan-Africanism as I could.

I think it’s touching that you are willing to assume these thugs even know what ‘pan-africanism’ even means.

Most of them probably think it has something to do with food.

Yeah, it’s a cool word that one of the gang who can read found in a Liberation Theology book once.

Not dismissing these wackos just out-of-hand, but that’s hardly even serious.

That wouldn’t even cover your bail bondsman for kidnapping and associated aggravated charges but that’s also assuming a sane world where one would actually be charged for the REAL criminal activity and also, no one ever accused this lot of having an over abundance of critical thinking skills….

What “charges”? It’s not illegal to provide information in return for a fee. Not unless they can make a case that you are acting as a private investigator absent a license in a jurisdiction requiring one or something similar. There is no requirement in the solicitation for anything to be done other than to provide information.

You flippin moron. No one can be that stupid and type. Anyone with >1 brain cells understands it is a bounty. You pretending otherwise just shows how screwed up you are. Perhaps we can put a bounty for your death information up.

richieB is exactly correct. There is no law against offering money for information. No matter who you are, or why you want it, or how intimidating it is to the subject of the information you seek.

$5K is a joke. The information is worth far more to the tabloids and other press if you can prove it’s good.

just some more gangsters in need of lead therapy …

I gave them my mother-in-law’s address. Dat bitch goin’ down.

Well. Dey gonna be real cornfused when I give ’em the black messiah’s address.

If they are citizens of this country that privileged should be forfeited, at the very least they should be stripped of all taxpayer support.

Except maybe “3 hots and a cot” in the federal pen.

Better would 3 sammiches and a tent in Phoenix.

That should read two sandwiches (not three) and a cot in Phoenix.

Or at least provide them with an extended 1st experience of the lifestyles of real Africans? I suspect few of them could handle it.

Which one? He has several, and was at one time registered to vote in multiple jurisdictions.

What better entertainment than getting all of your heavily-armed friends together in some out-of-the-way spot for a weekend and feeding the location to these PanAfs. Kind of has a Sons of Anarchy feel to it. He who commits violence, invites it.

“…for whatsoever a man soweth, that shall he also reap.”

Or maybe they ain’t smart enough to have anything other than lower life-form revenge on their puny minds. You shouldn’t play lawyer on this website – you’re not qualified.

So let Wilson arrange a meet at the police station as his current location. Then demand the reward money … Wilson doesn’t even have to answer questions, that would cost extra.

And while these guys are there, the police might have a few question of their own about the bounty.

There’s a SEASON? I figgered they were varmits, take them all year ’round.

richieB seems to be a new troll commenting here on LI. I wonder what his previous name was last week? Rags, any intel on this new one?

Nope. I see no overt trolling behavior.

You can have outre’ opinions without being a troll. If you disagree, engage. That’s all good.

We will watch and see… But we should always be on guard against our own human tendency to group-think. Always.

For all those claiming that there’s something criminal about this, how do you explain NAACP v. Claiborne Hardware Co.?