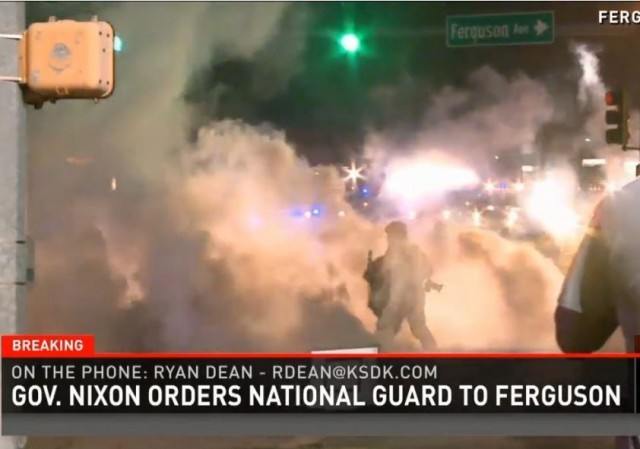 There is much speculation around when the Ferguson Grand Jury is likely to finally release their (widely expected) no true bill (non-indictment) of Police Officer Darren Wilson over the shooting death of Mike Brown.

A great many people, myself included, have suggested that the authorities responsible for the release of the Grand Jury’s findings would be prudent to wait for colder weather to do so, relying on the conventional wisdom that colder temperatures tend to diminish the frequency and intensity of riots and the other violent behavior (looting, arson) exhibited by the Ferguson protestors.

Legal Insurrection commenter Another Ed, however, has moved us past mere conventional wisdom on this subject by kindly linking to a scientific paper that studies precisely the correlation between riots and temperature.

That paper, “Ambient Temperature and the Occurrence of Collective Violence: A new Analysis,” by JM Carlsmith and CA Anderson of Stanford University, was published in the Journal of Personality and Social Psychology in 1979. It is embedded at the bottom of this post, for those of you who enjoy reading primary research scientific literature.

The Carlsmith paper conducted a re-analysis of earlier research, and found that in fact rioting (or, as they more politely refer to it “collective violence,” as if it were a workshop of some kind) increases “monotonically” with temperature.

The results of their research and analysis?

We conclude that the likelihood of a riot in a given city increases as the maximum ambient daily temperature in that city increases.

They helpfully include a graphical representation of their findings: 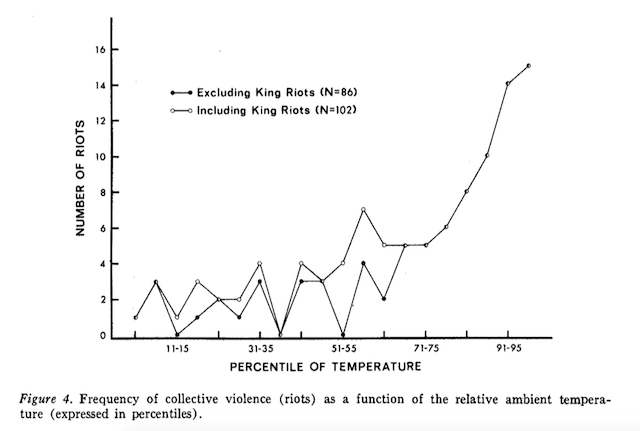 (As an aside, this paper is old enough that the authors sill make use of a null hypothesis to validate their findings. Climate researchers, take note.)

How do these scientific findings apply to the Ferguson Grand Jury?  Well, let us take a look at the average monthly high and low temperatures in St. Louis MO, immediately adjacent to Ferguson. 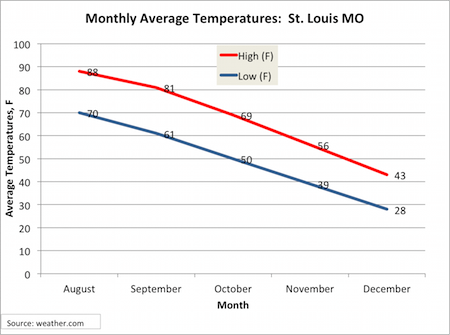 Mike Brown was killed in the month of August, during which the average high temperature is 88F and the average low 70F.  August also “enjoyed” the most violent of the Ferguson protests, as illustrated in the image at the top of this post.

Now, of course, we are in the month of November, with average temperatures (H:56F, L:39F) having dropped roughly 40% from their August figures. This suggests, based on the research of Carlsmith and Anderson that rioting should be much reduced in November relative to August.

Fortuitously for Ferguson, however, they are currently presented with a unique suitable opportunity to take advantage of the riot:temperature correlation in releasing the Grand Jury findings.

Specifically, temperatures for tomorrow, Monday, November 17 are currently being forecast to be well below the historical November average, hovering in the mid-20F’s.

Of course, in considering the effect of temperature on outdoor human activity merely looking at the raw temperature is not enough.  One must also consider the windspeed, in combination with that temperature.  And tomorrow is forecast to be an exceptionally windy day in Ferguson MO, with wind speeds in the range of 20MPH throughout the day.

I’ve represented the forecast raw temperature, “Feels Like” temperature, and wind speed for November 17 in the graph below. 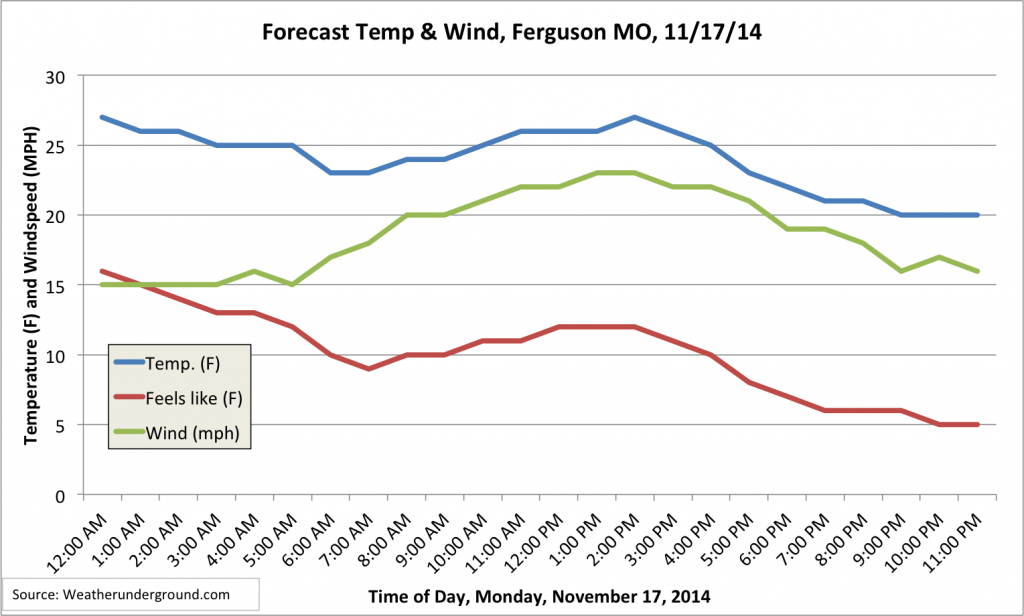 Based on that graph, I humbly suggest that mid-afternoon might be a particularly well-suited time for release of the news that the Grand Jury has (I expect) declined to indict Officer Darren Wilson.

Anybody care to set up a pool? 🙂

Here’s the Carlsmith and Anderson paper, for your scientific literature reading pleasure:

Study done in the wake of the riots in Newark, Detroit, Watts, and the RFK shooting, all of which ocurred in the summer.How often does St Louis suffer 12 inch snowfalls?

They should announce it at 4:59pm on Christmas Eve.
What’s the hurry?

If it were my city the colder and nastier the weather, the better. An announcement in the middle of a blizzard would be optimal.

Temps cold, turn on the fire hoses … riot over.

Thank you for your site!

As it happens, I am a meteorologist by profession and am looking as model data for STL area as I write this.

Not only will sub-freezing conditions continue in the short-term, it will become colder mid week and will not be above freezing before Friday afternoon. A cold rain will then begin Friday night and continue throughout the remainder of next weekend. So, other than Friday evening, the next week in STL area will be either below freezing or wet. If weather is to have any bearing on timing of decision, the meteorology of the next week would suggest an announcement today.

Are there studies correlating the likelihood of riots as a function of how “ethnic” a city is?

Maybe give a couple head fakes first … we will announce Saturday … then give a last minute change … nope, tomorrow. Oops, nope. Then just announce it say Monday night … the locals will be around, but those flown in will get bored.

Or they could make a half announcement. “So far there appears to be no evidence for prosecution … the full decision will be tomorrow.” Let’s some of the air out of the bag early.

They seem to already be indicating no bill, and letting the mob digest it. It may pass with a whimper. Since elections are over, there may be less interest in paying the provocateurs.

Kinda like… ummm… Obama’s announcement of his fiat amnesty?

I think the “leaks” so far have been tactical, designed to get people tired of getting all wee-weed up.

Every new “leak” will just wear them down more. Allllll good!

Which is actually not a bad plan when you consider the dynamics of group behavior.

I am a fan of using all weapons in the arsenal, so yep use the weather.

Demographics has a lot more to do with this than weather. I doubt there would be looting and riots in Chevy Chase, MD no matter what any grand jury anywhere did.

Perhaps it would be wise to take advantage of the massive natural confusion in Ferguson and release the report on Fathers day.

LMAO, so bad. I am almost ashamed that I laughed….almost.

But, really, as to “confusion”, you assume any of them care who de baby-daddy is. “Daddy” is the State.

They’ll have to first loot clothing stores for some flannel boxer shorts.

I’m a jail supervisor and I’ve been asked by prisoners why we keep the temperatures in the low 60s. One is we find if people are cool they generally are not in the mood to be disruptive. Also it keeps down the smell and disease. I’ll also thrown in an old memory. Back in 1985 (?) New York City had a snow storm that put the temperatures below 0 for over two days straight. Crime in the city was reduced 95% for those days. Hey, I like the idea using weather to keep people calm! Screw you ALGORE!

Heh, a cold rainy day would be about right.