William A. Jacobson has covered this trial extensively. See:

She was found guilty immigration fraud by way of of unlawful procurement of naturalization this afternoon.

Happy but not surprised by Rasmea Odeh guilty verdict. She committed immigration fraud.

Following the verdict, she addressed her supporters outside of the courthouse:

Rasmea Odeh has been taken into custody and was just lead away in handcuffs. via @stopfbi #Justice4Rasmea 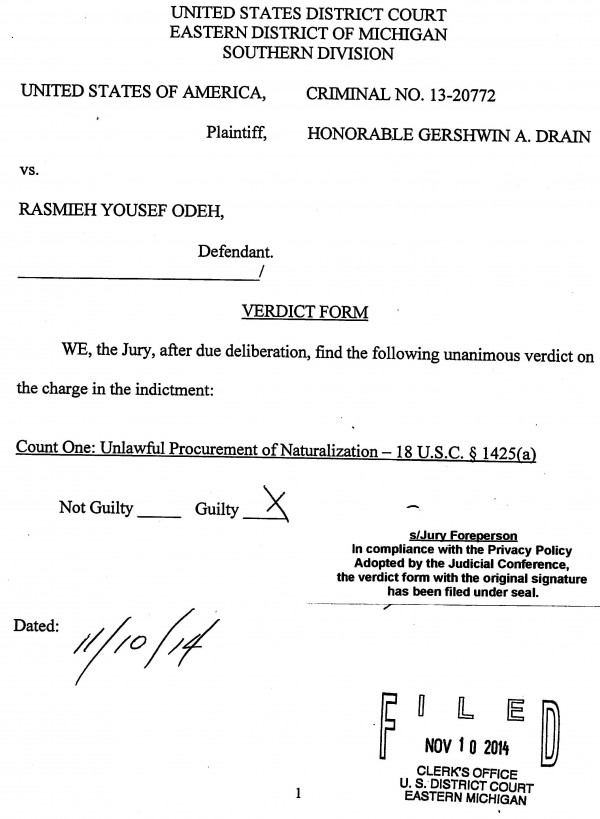 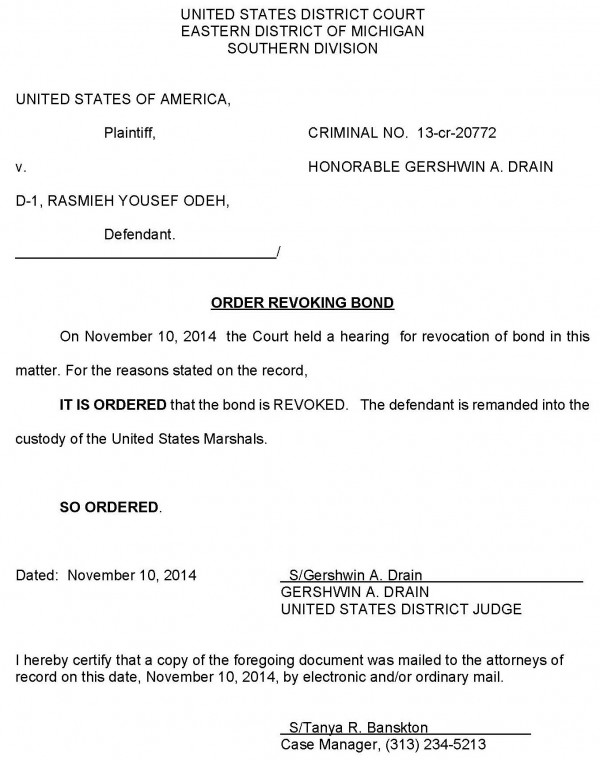 Thanks for the links Kemberlee.

Now on to the other jury tampering and vote buying scandals of this administration.

A jury decked out in choir robes delivers its verdict in hand-clapping, gospel song.

Trying to explain this case to my completely apolitical, non-news junkie husband:
“Well she was found guilty of terrorism, served some time in an Israeli prison, was released in a prisoner exchange, came to the US and lied on her immigration application.”
My husband says “So what’s the problem?”.
I explain, “she claims she was tortured by Israel which nullifies her conviction”.
My husband “Why would Israel torture anybody?”.
I say “Didn’t you get the memo about Israel being a racist country?”
Him “That defies logic, there’s so much I don’t understand. Why do they release these prisoners anyway and allow them to come to the US?”.
Me, “Exactly!”

Here is Odeh addressing her supporters after the verdict.

The Odeh supporters are shouting “Yes we can!”. Just like the Obama crowds! One can’t make this stuff up, it has to be seen to be believed. I don’t feel it is extrapolating too much say the comparison is more than superficial.

Today a Arab who had previously served a term of 5 years for an incident involving a Molotov cocktail (sound familiar?) murdered, in cold blood, a 25-year-old woman waiting at a bus stop outside Alon Shvut, Gush Etzion. I have a lot of friends and relatives there; so far her name is unknown. Two others were stabbed. (A security guard quickly stopped the Palestinian murderer and he died of his wounds while being evacuated to the hospital.

Earlier today a soldier was stabbed and critically injured by an terrorist, who is in custody.

PS – The latter was chased by both civilians and security. Where else do civilians chase after an armed terrorist?

The soldier has since died.

Hopefully, she will be quickly stripped of her citizenship.

Like that will matter. She’ll just resume her life here as an illegal alien, like millions of others, and she’ll have more rights and privileges than she did as a citizen.

Yep, and then amnesty-via-executive-fiat will grant her even more rights.

I’m guessing this case will be treated differently.

She refused a plea offer, went to trial, and lost. The Justice Department will get their pound of flesh.

Happy but not surprised by Rasmea Odeh guilty verdict. She committed immigration fraud.

I am happy, AND I am surprised. Any time that any part of the Federal government does the right thing is an occasion for surprise.

I note that the judge and jury are being threatened by pro-Palestinian demonstrators. I consider it likely that they will also be subject to IRS audits and other forms of regulatory harassment for the verdict.

Nice to see the jury didn’t buy her defense. Sadly I don’t think much will come from this, she might lose her citizenship but I doubt she’ll be deported.

Looks like her incitement video has been removed by user.

They say that that prison is like a pressure-cooker.