One of groups is co-sponsor of Steven Salaita Chicago-area speaking tour. 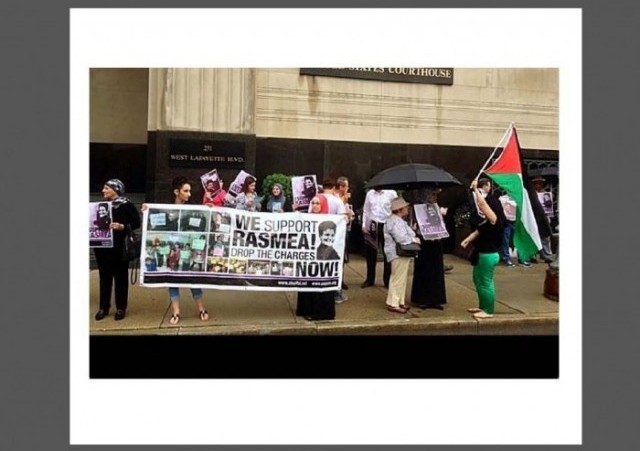 We have frequently reported on the aggressive protest tactics of anti-Israel groups.

According to a motion filed in federal court in Detroit, some of those groups allegedly have crossed a line, or plan to cross a line, from legitimate and protected protest into improperly trying to influence the jury in the upcoming trial of Rasmieh Yousef Odeh, who is accused of lying on her naturalization application by failing to disclose terrorist connections.

The Motion for Anonymous Jury (full embed at bottom of post) spells out the allegations against the protest groups. The Featured image is from that filing, showing protesters outside the courthouse.

The Indictment also is embedded below.

Federal prosecutors are publicly accusing a Palestinian-American activist of an “almost certainly criminal” effort to derail the trial of a colleague accused of naturalization fraud for failing to disclose a terrorism conviction in Israel more than four decades ago.

In a motion filed Friday in connection with the upcoming trial of Rasmea Odeh, prosecutors accuse activist Hatem Abudayyeh of the Chicago-based Arab American Action Network and other demonstrators of mounting protests aimed at swaying a yet-to-be named jury in Odeh’s case. The motion asks that the names of jurors not be made public or revealed to the defendant or her lawyers and that the jury be assembled off-site to avoid encountering the protesters.

“Since the date of defendant’s arrest for naturalization fraud, Hatem Abudayyeh has orchestrated a concerted effort to influence the criminal proceedings against defendant, which has resulted, at each proceeding, in a large group outside the Courthouse protesting and parading, carrying signs demanding dismissal of charges and ‘Justice for Rasmea’ and displaying the Palestinian flag,” prosecutors wrote in the new motion (posted here). “Abudayyeh has publicly stated that a goal of filling the courtroom, rallying outside the courthouse, and chanting while holding posters is to influence the opinions of jurors….As is evident from Mr. Abudayyeh’s own statements, it is his goal, and that of his supporters, to tamper with the prospective and seated jurors in order to sway the jury in defendant’s favor.”

Interestingly, The US Palestinian Community Network (USPCN) is one of the groups involved according to the Brief (at p. 2) supporting the government motion:

Since defendant’s indictment, Hatem Abudayyeh has engaged in a concerted effort to improperly influence the criminal proceedings before the Court. Specifically, through the aid of the AAAN (www.aaan.org), as well as the Committee to Stop FBI Repression (CSFR) (www.stopfbi.net) and the U.S. Palestine Community Network (USPCN) (www.USPCN.org), Hatem Abudayyeh has organized a campaign designed to improperly sway the jury that will be
empaneled to hear this case.

USPCN lists itself as one of the co-sponsors of Chicago tour this week by Steven Salaita, who was denied a tenured position at the University of Illinois at Urbana-Champaign.

It’s unclear if USPCN is co-sponsoring all of the appearances, or just the scheduled appearance at UI-Chicago, which was just canceled by Salaita on advice of counsel.

INDICTMENT as to Rasmieh Yousef Odeh (3)

[The words “by FBI” were removed from the title after publication because it is the US Attorney making the accusation.]

Deport that Arab scum. Arrest her buddy for attempting to influence the jury. Arrest him the day before the trial starts to disrupt his demonstration strategy.

It’s nice of them to admit that they support a terrorist.

And they are supporting her because of her terrorist connections.

Gangsters never cease trying to tamper with juries, do they?