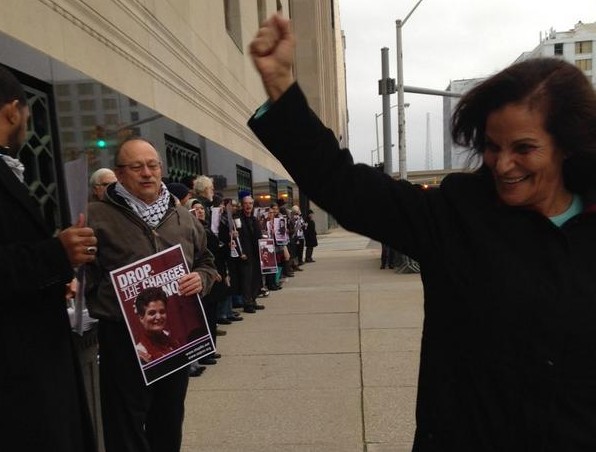 The trial in Detroit federal court of convicted Palestinian supermarket bomber Rasmieh (Rasmea) Odeh, for failing to disclose her conviction and prison time in Israel during the immigration and naturalization process, completed testimony Friday.

As detailed before, the defense strategy has been jury nullification — having the jury render a verdict based on the broader political dispute, while contesting the underlying conviction through claims by Odeh she was tortured into confessing.

The Judge cut off the latter approach by ruling that allegations of torture were legally irrelevant since the legal issue was the non-disclosure to immigration officials, not whether the conviction was justified. In fact, there is evidence other than the confession of Odeh’s involvement in the bombing, but to reopen the original conviction would have created a trial within a trial.

The judge ordered that the defense could not mention the alleged torture.

Nonetheless, according to a report from a supporter of Odeh, while testifying on cross-examination, Odeh volunteered to the jury that the was tortured. The Judge struck the testimony, but you can’t unring the bell. Via the anti-Israel Electronic Intifada:

[Prosecutor] Tukel began by asking Odeh about her education. As the defense has alleged that Odeh had help from her brother on her 1994 visa application and then misinterpreted the questions on her 2004 application for naturalization, the prosecution focused on Odeh’s advanced education.

“You knew that was a false statement when you submitted your application?” he asked.

“No why would I lie?” Odeh responded.

“Why would you lie?” Tukel retorted. “You had to lie because you knew if the US Embassy had found out you were in Lebanon, they would find out you had been in Israel before and would then have found out that you had been convicted of two bombings that resulted in the death of two innocent civilians.”

“No, I was tortured —” Odeh exclaimed.

It’s unclear from the reports whether the Judge had any greater reaction to this clear defiance of his order, other than to sustain the objection.

This was part of a pattern, as we previously noted, of defense counsel suggesting to the jury without using the word “torture” that the conviction was illegitimate. Without being in the courtroom it’s hard to know what effect, if any, this strategy has had on the jury.

Given the judge’s sustaining objections, and jury instructions, it may make no difference at all, or may even hurt the defense.

Other than jury nullification, Odeh’s defense seems to be that the questions were confusing, and that she thought the question of prior conviction and prison incarceration only applied to the extent it took place in the U.S.

According to AP, the prosecutor mocked that claim in closing argument:

“How does someone misunderstand the word ‘ever?’” Assistant U.S. Attorney Jonathan Tukel said during closing arguments in Detroit federal court.

Tukel was referring to Rasmieh Odeh’s citizenship application, which asked if she had “EVER” been arrested, charged, convicted or imprisoned. She checked the “no” box, telling jurors she believed the questions were related only to criminal history in the U.S.

“How ridiculous is that?” Tukel said

Odeh was interviewed in 2004 by a Detroit immigration officer, Jennifer Williams, who told jurors that she always tells citizenship applicants that criminal history applies to “anywhere in the world.” Odeh, however, testified that Williams didn’t use those words.

“I remember exactly what she said. … She didn’t add questions,” Odeh said.

According to the Electronic Intifada author the prosecution used the simple analogy of your fiance asking if you’ve ever been married:

With derision, Tukel characterized this as an “amazing string of coincidences.” He described Odeh’s claim that she misinterpreted the question as “ridiculous.”

In an apparent effort to appeal to the majority female jury, Tukel made an analogy to a hypothetical conversation between an engaged couple: “What if a woman asked her fiance if he had ever been married and he said no.”

In the scenario Tukel posited to the jury, the man is then revealed to have been once married abroad, to which “the wife’s head snapped” — but the man claimed he had nevertheless truthfully answered her question.

“That’s an everyday, common experience that you can imagine, to help you use your common sense in this case,” Tukel said to the jury.

Since no report of an immediate motion for a mistrial was made, I doubt very much that the prosecution felt she did anything but hurt herself with her defiance of the court’s instructions.

Question: Can her citizenship still be revoked and her posterior deported regardless of the outcome of the trial?

Not according to Obama, no.

In fact, Obama has her in line for attorney general, should Loretta Lynch not be confirmed.

Maybe, but it has to be for a different reason, otherwise it will be double jeopardy.

Not sure about the double jeopardy angle.

The reason I asked is that Chapter 2 of the USCIS manual advises as follows:

“Discovery that a person failed to comply with any of the requirements for naturalization at the time the person became a ​U.S.​ citizen renders his or her naturalization illegally procured. This applies even if the person is innocent of any willful deception or misrepresentation.​”

I’m not sure whether revocation of her citizenship requires a criminal conviction. John Demjanjuk was stripped of his citizenship and deported, but I do not believe he was ever charged with a criminal violation in the US relating to his naturalization.

I withdraw my question! 😀

I halped someone fill out an application for a tourist visa to the US. It’s the most complicated for I ever filled out since I applied to the NSA (unsuccessfully) decades ago.

They actually ask you if you were a terrorist. Now we know why.

I worked in immigration, and yes, they ask lots of moral character questions just to put the applicant under oath. I’m sure many lie about it, but if something comes up, they can be deported in the future time for lying on immigration papers. I believe that’s how we booted a few former Nazis out of the country — not for being Nazis, but for lying about it.

They claim to hate the US so much but they will do anything to come and live here.

One has to wonder, why?

Because there is no place on earth (possibly excepting GB) where you can do so much damage at so little risk.

If you were a terrorist, the U.S.A. is where you would want to be.

Well, it looks like my lil’ troll has awakened from its post-election torpor.

Had to nurse all that butt-hurt, huh?

Ever try to proclaim your hatred for the government of Turkey, Iran, Saudi Arabia, etc., while living there? Not a happy experience. Even when their minds and mouths are filled with hatred and derision, their bodies have enough sense to “vote with their feet” and move to a place of freedom and comfort.

Unfortunately, it’s a little too easy to do it in Israel, even in the Parliaments itself. The judiciary/prosecution complex has a LOT of tolerance for treason on the Left. The public is starting to wear a bit thin, though – there is a proposed law that would allow revoking citizenship.

“We will win” – Let’s be clear what we are winning:

“In 1969 Odeh was part of a PFLP attack planting a bomb at a Shufersol supermarket in Jerusalem which killed two Hebrew University students, Leon Kanner and Eddie Joffe, and also wounded roughly ten others. The bomb was reportedly hidden in a candy box tucked on a shelf of the store.

“She was arrested and given a life sentence, but ten years later and after a failed escape attempt, Odeh was released to Lebanon as part of a prisoner swap with the socialist PFLP terror group.

Oh, she was a Obamacare navigator, but to be fair, the state threw her out.