Court shuts down defense attempt to contest her Israeli bombing conviction in prosecution for making false statements on naturalization application. 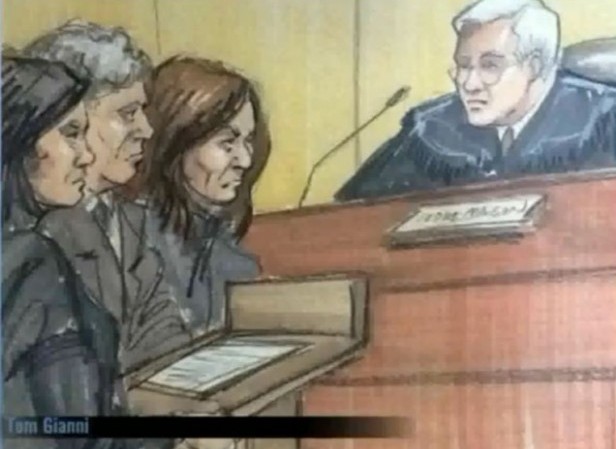 The trial of Rasmieh Odeh, an American citizen of Palestinian descent convicted in Israel decades ago of involvement in a terrorist group (the Popular Front for the Liberation of Palestine) that bombed a supermarket in the late 1960s, starts November 4.

Odeh was convicted in Israel, but now claims she was tortured into confessing.

The U.S. government is prosecuting Odeh for failing to disclose the conviction when she applied for naturalization.

Several key rulings came down in Court this afternoon (full embeds to be added at bottom of post:

Odeh has requested a delay of the trial. As of this writing, there has been no ruling on that.

The mainstream media is focusing on the bar of the terms “terrorist” and terrorism,” but as demonstrated above, that ruling is meaningless.

All in all, these rulings are devastating to the defense. The government now only needs to introduce evidence of her convictions in Israel and her application in which those convictions were not disclosed. The defense cannot counter with claims that the convictions were wrongful, or that she suffered any form of PTSD as a result of her alleged coercion.

Couple this with protections the Court has put in place to protect jurors from influence by pro-Palestinian activists, and there doesn’t seem to be any viable defense.

But that’s what they said about O.J. Simpson.

This is no Judge Ito. He’s not gonna put up with any playing.

The OJ case is notable precisely because it was so bizarre. And, almost 20 years ago.

Sure, there are plenty of feckless and idiot judges (just ask Mark Steyn).

Sure, one can never be certain a jury isn’t going to go clear off the rails, achieve escape velocity, and visit Betelgeuse.

But it doesn’t happen all THAT often.

And as Rags notes, this judge seems to have his gear strapped on tight.

I watch Ito totally lose control of his courtroom and that case.

He’s largely culpable, IMNHO, for that debacle. The prosecutors, too. I don’t blame the defense for doing their job and taking advantage. I wouldn’t, but that’s me.

That jury was never going to vote to convict, no matter what happened in the courtroom.

Guess this is something that gets to me about this Judge:
“The Court of course agrees that confessions obtained through the use of torture and rape are antithetical to the concepts of fairness, due process and basic human rights. Moreover, the Court accepts as credible Defendant’s claims of torture and is not unaffected by the inhumane circumstances of her detention in the West Bank.”

Do you somehow disagree with what the Judge said? I don’t understand your comment. If coercion was used then of course it was wrong, but that isn’t the issue before this Judge.

Frankly, I am more concerned with no being able to call a duck a duck. If someone is a terrorist that isn’t prejudicial its just honest.

It is a canon of the law that a party’s pleadings are assumed by the court to be credible.

That just makes sense, if you think about it. The court has no business making judgments until the evidence has been placed before it. So the court is to take all pleadings at face value. Unless…as in summary judgment…it isn’t.

See…? This is why lawyers go to law school.

Okay, not having much experience in court proceedings, if it’s normal for to call all pleadings as credible, I can now accept that this judge was not actually agreeing with the accusation that the Israelis raped this woman to get her confession. Thank you for the knowledge, the day is not wasted.

It’s just a platitude. It’s irrelevant to the case and means nothing.

The question at hand is did she or did she not lie on the application about her conviction? If she was convicted, she was required by law to disclose that conviction.

Failure to disclose that conviction would qualify as lying on the application.

In addition, she KNOWINGLY failed to disclose this conviction. It wasn’t like she was out of the country and not present for her own trial. She knew she had a conviction.

In cases like this, I wish the entire cost of the prosecution could be dumped onto the defendant for forcing a trial in which the outcome could only be conviction. Constitutional rights, in my view, are not license to abuse the system. Until we authorize jury nullification, cases like this have no business being taken to a jury.

Yeah, I know I’m being dreamy. Better here than in a courtroom.

Convicted wrongly or not, she served ten years in prison on a life sentence. That is something that required to be disclosed and is not something that could have been accidentally omitted.

The Popular Front for the Liberation of Palestine (PFLP)is designated as a terrorist group by the USA(POTUS CLINTON Executive Order 01/24/95), Canada & the EU. The indictment charges Rasmieh Odeh with being a member of the PFLP which specifically denies admission under the Terrorism-Related Inadmissibility Grounds (TRIG) INA section 212, codified as Title 8 of the U.S. Code, section 1182, but the Court ruled that the government may not use the words “terrorist” or “terrorism” as those terms are prejudicial.

It seems to me that if the indictment is specifically charging prior membership in a designated terrorist organization that ‘Terrorism’ is material to the case. Would the court decree that during a drug case that drugs are prohibited from being mentioned? Can we have a murder trial where the word murder is prohibited? O_o

There has to be some kind of distinction between material elements of the case and the court’s concept of ‘prejudicial’.