They define “divorced from reality.” 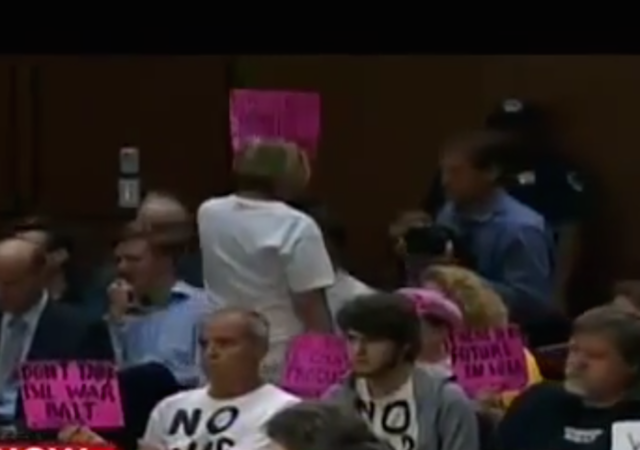 Code Pink is a liberal-progressive anti-war NGO, but it isn’t strictly partisan. Earlier this month, they protested outside the White House while President Obama laid out his plan to roll back ISIS in the Middle East.

(Then again, they also protest Israel’s right to self defense, so let’s not kid ourselves about where they stand generally.)

Code Pink recently issued a statement to its members calling the latest intervention in Iraq “The Dumb War”:

Why does our President want to take sides and get involved in a civil war? The US is not the target of ISIS, but if we become involved, we will be. President Obama’s concerns about the Iraqi humanitarian crisis and the safety of US personnelcan be solved without dropping bombs. Helping the besieged civilians in Iraq should be an orchestrated international effort, not carried out just by the US–the country that unleashed the sectarian turmoil in the first place. And if American personnel in Irbil or elsewhere in Iraq are in harm’s way, they should be immediately evacuated to a safe location.

Code Pink’s messaging tactics are completely divorced from reality. They claim that “[t]he US is not the target of ISIS;” have they missed the past few weeks? Let’s take a look back:

In late August, normally reserved Secretary of Defense Chuck Hagel said in a press conference that American interests have been and will continue to be threatened by the Islamic State:

We are pursuing a long term strategy against ISIL, because ISIL clearly poses a long term threat. We should expect ISIL to regroup, and stage new offenses, and the US military’s involvement is not over.
…
Our objectives remain clear and limited: to protect American citizens and facilities, to provide assistance to Iraqi forces as they confront ISIL, and to join with international partners to address the humanitarian crisis.

This came two days after we learned of the brutal execution of American journalist James Foley, and just days before the similar execution of Steven Sotloff.

5 days after Secretary Hagel’s declaration, ISIS demanded over $6 million in ransom for the life of a 25 year old female aid worker they kidnapped.

ISIS attacks on major Iraqi oil installations have driven up the price of oil for consumers all over the world.

The State Department is begging those considering defection to think otherwise.

If we’re not the target of broader ISIS aggression, then who is?

Protesting in order to move your party farther from the center isn’t non-partisanship. It’s more like hyper-partisanship.

One of the things that amuses me no end is the Obamic concept of “triangulation”.

The Clintonian version involved observing the positions of two opposing parties, and then adopting a third “pragmatic” position that SEEMED “reasonable”.

The Obami, instead, just adopt ALLLLLLL positions. It makes people dizzy, which of course, is the design.

Code Pink protested outside Walter Reed and met wounded troops returning from war with signs that read: “Maimed for a Lie”

Agree 100%. There are as vile as that Westboro Baptists group.

We should really call them the Westboro Lawyers. The baptist front is just a tax dodge. They are about inciting people to violate their rights so they can sue. Its how the family makes its money.

They ARE registered Democrats, something they have in common with Code Pink.

I was aware of that. It’s why I say they’re vile (along with attempting to disrupt military funerals), not because of the “God Hates Fags” signs they carry, which are merely reprehensible speech.

But some may not be aware, so it’s good that you clarified that.

Fred Phelps died a few months ago and is burning in Hell as I type this. The now rudderless “church” consisted mostly of family members but many have left. They are down to about 40 or so members. They may owe more in a couple judgments against them than they’ve ever collected, and all their properties have liens.

It was really more of a hatred cult fed by scams than any sort of recognizable “church”.

They’re pretty much finished, and when Shirley Phelps dies, it will most likely be the final death knell of these satanic psychos.

The most notorious event at that meeting was not Code Pink, but Dempsey’s lame remark that ISIL was fighting because of ‘grievances.’

Reminds me of the defenders of the 9/11 hijacker/terrorists.

Islam only causes grievances, it does not have legitimate grievances.

NOTE – Dempsey called it ISIL – which means one of the grievances is not having the whole land of Israel.

What a sorry student of history and a poor observer of evidence he is, overlooking the actions of vile, evil Islam from its inception until today. http://www.thereligionofpeace.com

ISIS is Islam and Islam is ISIS, Hamas, Al Queda, Islamic Jihad, Al Shabaab, Boko Haram and the rest of the groups listed by the US State Department.

The Muslim Brotherhood and other Islamic groups were doing the same barbaric deeds as ISIS all over north Africa during the Arab Spring.

’60s style protest demonstrations evoke little more than a yawn out of anyone anymore. Talk about old school and outdated.

They are like an 8-track of the Monkees…that sags.

I wasn’t seeing it until you said ‘sags’.

Lol, 8 tracks. Remember how they’d have to cut a song right in the middle and carry on 5 seconds later on the next track? And how if you hit a bump it would make your 8 track skip to another track? How you’d buy a new 8 track, pop it in the dashboard player, cruise town listening to the whole album, think ‘wow, awesome new album’, pull the tape out… only to see about 3 feet of tangled, twisted tape between the player and your new tape. Argh! As a freshman at Ferris State (MI), I was one of many ‘tape doctors’ who had some success rewinding eviscerated 8 track tapes. For a doobie, of course. Smoke on the water, baby. Fire in the sky.

It was still one of Mr. Lear’s genius inventions.

My old record changer skipped a lot worse on the bumpy roads… Hell, it still does, and the needles are getting harder and harder to come by.

The military is envious of the scale and efficiency of planned and impulsive abortions/murders.

Or perhaps the patriarchy is not as bloodthirsty as its matriarchal counterparts.

Here is a case of a woman who received six months in jail for asking to testify at a Congressional hearing.

It makes one wonder if these Code Pink “protests” are not staged with the active consent of the Democratic Party.

Of course they are. How do you think they got in the hearing room? Pink signs? ‘No’ tee shirts? Vacant, glassy, herd like stares? Even the most thick-minded capitol cop is going to figure that one out. Of course they had help getting in.

How is it if you disrupt you local town meeting you can be charged with an offense but if you are pink slime and continue to disrupt Congress you are allowed to return time after time…. answer…of course the Dems are co-conspirators .

(And the case of the woman who supposedly was sent to jail for asking to testify at a congressional hearing seems awfully weak. No cites other than one rather vague website.)

I wonder which Congressman’s office provided the passes for these kooks. You don’t just walk into a hearing room, you need a pass.

Democrats have been notorious in allowing disruptions of House and Senate hearings when they serve their own purposes. Especially bad were those that touched on the solvency of Fannie May, with black activists screaming “racist” at Republicans.

I suspect that the Code Pink access was not provided by a Republican. More likely it was a far left Democrat. In that case fratricide is good.