Hopefully will work better than commercials for the war on drugs. 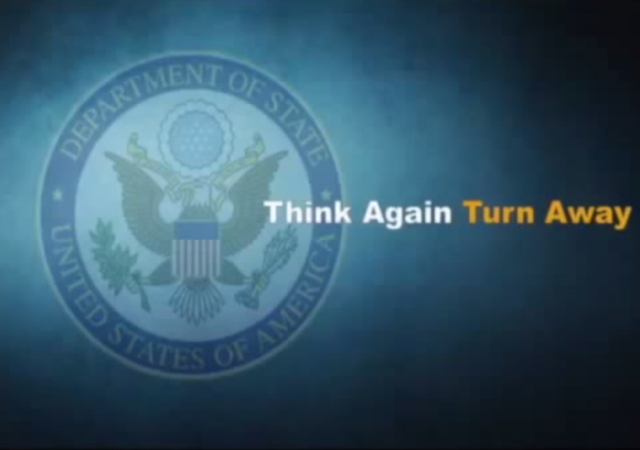 The Islamic State, otherwise known as “ISIS” or “ISIL,” made a name for itself earlier this summer via graphic videos showing the beheadings of American hostages Steven Sotloff and James Foley. The atmosphere of terror created by ISIS in northern Iraq and Syria has helped the group draw in millions of dollars in ransom money, and motivated world leaders to work together to develop the growing terror threat in the Middle East.

Part of the United States’ strategy to fight ISIS is happening online in the form of propaganda videos targeted at Americans who are considering defecting to the Middle East to fight with the Islamic State.

The first hit, “Welcome to ISIL-Land,” features a series of graphic smash cuts highlighting the torture, beheadings, and mass violence that has defined the group’s presence in the American media.

As Legal Insurrection has previously reported, hundreds of Americans have joined forces with ISIS in the Middle East, making the $6 million effort by the State Department a worthwhile one. Although some have complained about the video’s campy presentation of footage, the State Department says that the point of the video is to force potential recruits to encounter the true nature of ISIS.

“The point, obviously, of this is to target potential recruits, potential sympathizers, to show the brutality” of the organization, said State Department spokeswoman Marie Harf. “To point out the fallacies, point out the inconsistencies.”
…
The Islamic State “is the gold standard of terrorist propaganda in terms of quality and quantity,” said a senior State Department official involved in the countermessage effort. “They put into practice what al-Qaeda has ­always said and could never do,” in promoting themselves effectively in the news media and online. The official, like others, spoke on the condition of ­anonymity because he was not authorized to discuss the U.S. campaign on the record.

Will it work any better than war on drugs commercials?

At a summit in Wales last week, President Obama called on NATO allies to “to reject ‘isolationist’ impulses and confront the rising terrorist threat posed by Sunni militants in the Middle East.” He has not, however, revealed a cohesive strategy or intent for the U.S. military to lead in the region.

useless video.
show them what they do to people when done with them

To a generation raised, if that’s the right word, on video game blood and gore those videos might be more exciting than disturbing. We have to be careful what we put out; Uncle has a bad track record with his propaganda.

President Obama called on NATO allies to “to reject ‘isolationist’ impulses and confront the rising terrorist threat posed by Sunni militants in the Middle East.”

(If he means it. This administration has been supporting “Sunni militants in the Middle East” in multifarious direct and indirect ways for years.)

Adolescents are running our government.

Why? Drug use went down, didn’t it?

Actually, drug use went down under Reagan/Bush (IIRC) and up under Clinton. Anyone want to guess why?