Iraq’s oil wealth is a gold mine for funding terror activity. 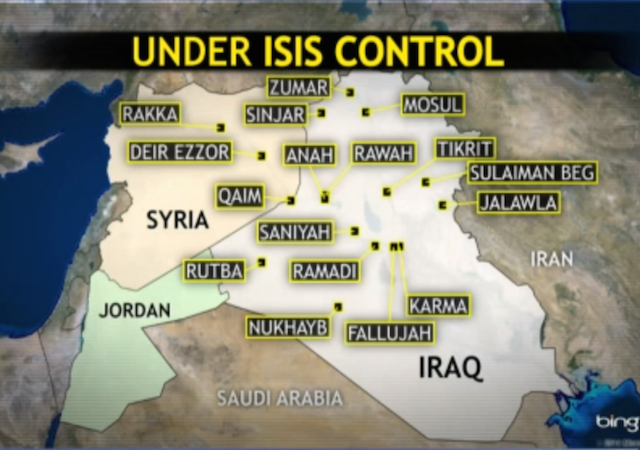 Islamic State militants have set fire to Iraq’s largest oil refinery, escalating tensions in the region and raising questions about how much control ISIS could potentially gain over the world’s oil supply.

This isn’t the first time this particular refinery has been attacked; it’s a favorite target of ISIS militants. They have attacked the refinery in the past as a way of securing fuel to smuggle to parties who fund their self-declared “caliphate” in northern Iraq and Syria.

“The fire could go on for two or three days as there is no civil defense to put it out,” police said in the statement, without indicating how much oil the tank contained. “The situation in the refinery’s perimeter is quiet now.”
…
The Baiji refinery has an installed capacity of 310,000 barrels a day and the storage tank that came under attack belongs to a group that typically contain 100,000 barrels each, Saad Al-Obaidi, a protection force personnel at the plant, said by phone. The plant stopped working in June.

The Islamic State’s control over the oil supply in the middle east is affecting oil prices all over the world. According to Fox News, the inflation caused by ISIS activities has raised the price per barrel by as much as ten dollars.

“They’ve become very much self-sufficient,” [Luay al-Khatteeb, founder and executive director of the Iraq Energy Institute] told FoxNews.com. “They control about 60 percent of Syria’s producing fields in its oil-rich eastern region. In Iraq, they control about seven oil-producing fields and two small refineries with a potential output of 80,000 barrels. And the black market is expanding into Turkey, which is becoming the main beneficiary of that market.”

Al-Khatteeb noted that the oil money is far from the extremist group’s sole income, citing its frequent illegal operations like extortion, kidnapping for ransom and by selling the large numbers of antiquities stolen from looted sites in northern Iraq.

“It’s insignificant at this point, but it provides them significant financial backing,” al-Khatteeb said of the oil production facilities now controlled by Islamic State. “Just on the Iraqi side, this is nearly three-quarters of a billion a year and this is, of course, not their only source of revenue.”

First, they came for Iraq, then Syria. Now, they’re smuggling oil into Turkey—and all of this activity is now affecting how much Americans pay at the pump, and increasing pressure on environmental activists and liberal politicians to increase domestic energy production. It will be interesting to see how this affects the White House’s narrative regarding hydraulic fracking, offshore drilling, and the construction of the Keystone Pipeline.

Amy, a couple of copy-book issues…

Why do you use “Islamic State militants”? They are ISIS terrorists.

I doubt very much they “smuggle” oil into Turkey. I expect at most they “trans-ship” oil anywhere they want.

You seem to think Collectivist environmentalists are rational.

They just are not.

Someone explain to me the value of a great big buttload of oil AFTER you burn it ????

So:
Which is the dumber of the two?
Iraq, for leaving their leading refinery a soft target, or ISIS for torching the highest value asset they could have captured?

Ha. Can’t wait to bludgeon the anti-Bush Left with that one.

“Some men just want to burn the world”.