Chuck Hagel says ISIL is “beyond anything we’ve seen.” 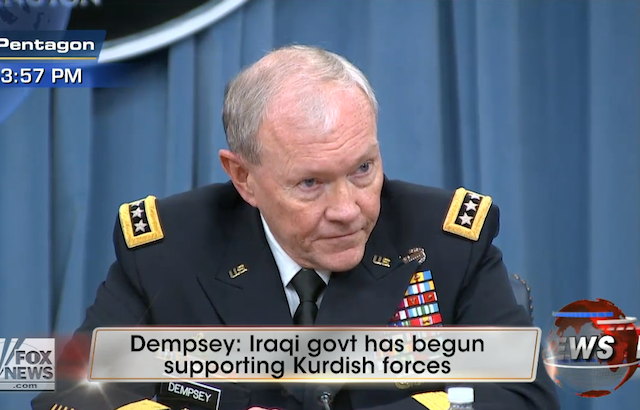 Defense Secretary Chuck Hagel and Chairman of the Joint Chiefs of Staff Martin Dempsey went into detail Thursday about the threat ISIL (“ISIS”) poses not only to minorities in the Middle East, but also to American interests both at home and abroad.

“Jim Foley’s murder was another tragic demonstration of the ruthless, barbaric ideology of ISIL. ISIL militants continue to massacre and enslave innocent people, and persecute Iraq’s…minority populations.
…
Given the nature of this threat, at President Obama’s direction, and at request of Iraqi government, the United States military has provided assistance to Iraqi security forces in order to protect U.S. personnel and facilities, and support Iraq’s efforts to counter ISIL in addition to providing humanitarian assistance.”

Secretary Hagel said that he anticipates that more international forces will join the already-international efforts in the coming weeks. He also lauded the recent peaceful transition of power in Iraq, and promised assistance in exchange for political progress.

He did not, however, downplay the risk that ISIL still poses:

We are pursuing a long term strategy against ISIL, because ISIL clearly poses a long term threat. We should expect ISIL to regroup, and stage new offenses, and the US military’s involvement is not over.
…
Our objectives remain clear and limited: to protect American citizens and facilities, to provide assistance to Iraqi forces as they confront ISIL, and to join with international partners to address the humanitarian crisis.

When pressed about the possibility of additional, continued air strikes by the US military, neither Hagel nor Dempsey would confirm that this was part of the plan. They said that the battle against ISIL is “bigger than just a military operation,” and emphasized the importance of international partnerships and strategic military strikes, as opposed to a “scorch-the-earth” approach.

During the conference, the press took both Hagel and Dempsey to task about the declassification of details regarding the failed rescue attempt of American hostages held by ISIL. The recent murder of American Journalist James Foley has brought this mission into the spotlight, and the media’s questions did much to emphasize the difficulties of fighting an enemy like ISIL, without drawn battle lines or any hope of adherence to the rules of war. Confronted with the question of whether or not this mission was a “failure of intelligence,” Dempsey responded, “[i]ntelligence doesn’t come wrapped in a package with a bow… The enemy always has a say, and the fact is that you have to work that reality in.”

The press pool pressed the panel on the threat ISIL poses to American soil, and Hagel commented briefly that, in the days leading up to 9/11, no one would have said that the U.S was vulnerable to an attack of that scale. However, both men attempted to break the connection between the current threat, and that posed by Al Qaida more than a decade ago.

“Terrorism is not new to the world. The sophistication of terrorism…presents a whole new dynamic and a whole new paradigm of threats to this country.

ISIL is as sophisticated and well funded as any group we’ve seen. They’re beyond just a terrorist group. They marry ideology, sophistication of strategic and tactical military prowess, they’re tremendously well-funded. This is beyond anything that we’ve seen, so we must prepare for everything, and the only way you do that is you take a cold, steely hard look at it and get ready.”

Chairman Dempsey emphasized the risks posed by American citizens and foreign nationals traveling from home and into the Middle East to join the ISIL cause, and seemed to give a nod to the theory posed by Texas Governor Rick Perry that an open borders philosophy could contribute to the infiltration of repatriated ISIL adherents.

“Only” repatriated Jihadists coming across the porous US borders? Foreign policy will be blackmailed by the creation of terror cells throughout the country. It may have been wishful thinking that we could keep the battle with fervent Islam outside the country, but the willful compromise of our borders to satisfy future political party aims and cheap labor wants has allowed the US to be a ground zero for future terror. This means less day to day freedom for Americans within our borders. Politicians may think that they can kick the can down the road over this issue… but coffins of US citizens are hard to kick down the road.

kicking coffins down the road? that is chump change for prog pols like barry and hillary who will knowingly lie to the faces of grieving parents as their boys bodies are being unloaded from the transport planes. the video did it.

“ISIL is as sophisticated and well funded as any group we’ve seen.”
With our money and equipment. Having an unsecure border sure isn’t helping much either.

Meh – they’re only the JV team. Don’t you dare bother His Royal Zero-ness with such minutae. He’s got more pressing matters to attend to – like golf.

If we actually had a functioning media instead of a butt kissing media, that JV quote would be replayed every hour on the hour for the next 6 months.

Hagel is an appallingly bad Sec. of Defense.

They are going to back us into a world war.

And, there are people willing to fight it.

That’s an interesting article, but I’m afraid it’s more bravado than anything else. As a veteran of 22 years, including combat experience, I can verify that vets are willing to take up arms and decimate any invaders – IF we can tell who they are! Based on the way jihadists operate we probably won’t know they’re in town until a building blows up, so who do we shoot at in retaliation? How do I make my MSR effective against whoever it was that dumped the poison in our water supply last night, or exploded that dirty bomb downtown during rush hour?

This is a real war, but it is unlike a conventional one. It is going to be long and really, really messy and The Hague and Geneva Conventions are going to among the first casualties. I hope we have the stomach for it; my boys won’t take well at all to dhimmitude!

I wonder what the real purpose of that presser was.

So far as what was actually said, it was a big load of nothing much.

in addition to providing humanitarian assistance

join with international partners to address the humanitarian crisis

This is all mere pablum. It has nothing to do with the extermination of homicidal Islam. And anything less than such extermination will be defeat.

Hagel commented briefly that, in the days leading up to 9/11, no one would have said that the U.S was vulnerable to an attack of that scale

Utter hogwash. Anybody with any trace of imagination could see it and say it, and many did so. Exactly who would stage the attack wasn’t so clear; but the West’s vulnerability was entirely obvious.

Terrorism is not new to the world. The sophistication of terrorism…presents a whole new dynamic and a whole new paradigm of threats to this country.

They’re still pretending that terrorism is the problem, as if they were dealing with dilettantes like the Red Army Faction or the Weathermen. The problem is Islamic terrorism. And the whole point of terrorism, its unvarying modus operandi, is that its practitioners strike anybody, not just their obvious enemies. “Soft” targets vs. “hard”. All old stuff.

Ferdinand of León and Castile, Charles the Hammer, the Graf Nicolas zu Salm-Reifferscheidt, King Jan III Sobieski knew what to do about this problem. Modern “leadership”, though, has missed the starting gun. “We should expect ISIL to regroup, and stage new offenses, and the US military’s involvement is not over.” Hell, it hasn’t started yet. So get on with it.

we must prepare for everything, and the only way you do that is you take a cold, steely hard look at it and get ready.

The wake-up call for even the most thick-headed was over a decade ago.

The unpleasant fact, like it or not, is that the defeat of the worldwide Islamic terrorist assault is going to involve a lot of dead bodies – orders of magnitude more than anyone (except some Muslims) is contemplating, at least out loud.

Get used to the idea. Nobody can avoid wars and massacres by simply insisting that they’re not there. You fight or you lose.

Add Slobodan Milosevic to that list .”When they are in your cities beheading your people you will know what this was about” . He wS smarter & eloquent getting tried by those lackeys of the west at The Hague.

I wonder what the truth really is. I am beginning to doubt anything that comes out of this administration. Is he trying to lay the ground work for martial law? Is he trying to lay the groundwork for staying in office? He has the stupidest guy on the planet come out with his hair on fire and tell us something the rest of us have known since March about ISIL/S. They tell us the enemy could come across the southern border. Good grief, I knew that 6 years ago!. BHO and the Dems have been telling us that border is “secure” . How does Hagel explain that? Wrap my head in duct tape, it is going to explode.

I wish you were a member of our press. Those are all really good questions. You are spot on!

ISIS is not the only threat This administration is a threat to the U.S.

I think we’re seeing the fallout between the Pentagon and an administration that doesn’t appear to value their judgments or recommendations. The Pentagon and the White House are serving separate masters.