The anti-Semitic shame of Malmö, Sweden continues with attack on Rabbi

The anti-Semitic shame of Malmö, Sweden continues with attack on Rabbi

Wherever we see anti-Israel protests, we see Malmö sickness 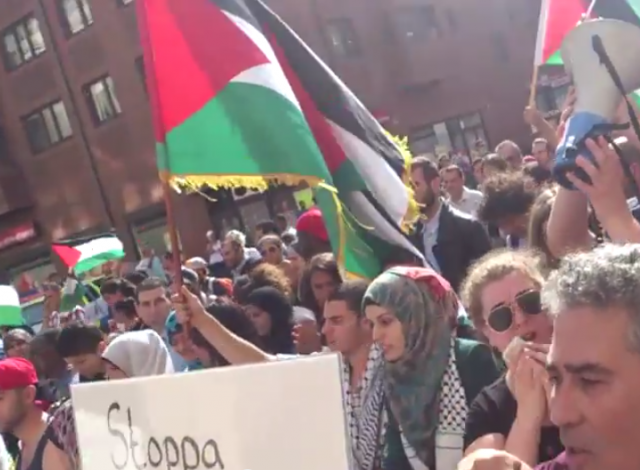 Once again we return to writing about Malmö, Sweden.

Malmö, for us, has become something of the poster-child for Islamist anti-Semitic violence in Europe coupled with leftist tolerance and indifference, all in the name of hating Israel.

Recently there have been anti-Israel rallies in Malmö:

It is not surprising that the anti-Semitic shame of Malmö egged on by anti-Israel hate in the streets has resulted in violence, from JTA via Haaretz, Rabbi attacked in Sweden, days after synagogue vandalized

A rabbi from the Swedish city of Malmo was attacked by men who hurled objects at him from a car and used anti-Semitic pejoratives.

Rabbi Shneur Kesselman was assaulted on Saturday night along with a member of his congregation, the Sydsvenskan daily reported Sunday.

The attack, which resulted in no physical injuries, came on the heels of vandalism against the southern city’s main synagogue on July 31, when unidentified individuals smashed three of the building’s windows by hurling objects at them.

The assault against Kesselman, who has been the subject of dozens of similar attacks in Malmo over the past decade, happened as he and congregation member Hugo Klein were walking away from the synagogue at 9 P.M.

A car approached them with several men inside who called out: “F—ing Jews” and hurled a glass bottle at Klein and Kesselman. The bottle shattered on a wall behind them.

Earlier that same evening, a lighter was thrown at the men from a passing car.

Malmo, a city of 300,000 residents, is home to a few hundred Jews. A third of the city’s population is immigrants from Muslim countries or their descendants.

Dozens of anti-Semitic crimes are reported annually in Malmo. Last month, a man was beaten there for displaying an Israeli flag in his window.

On April 16, the district of Skane, where Malmo is located, declined the Jewish community’s request to increase the number of security cameras around Jewish buildings, according to Michael Gelvan, chairman of the Nordic Jewish Security Council, and Per-Erik Ebbestahl, director of safety and security in the City of Malmo.

There is a profound sickness sweeping Europe, and elsewhere.

Wherever you find an anti-Israel rally, you find Malmö sickness:

These are crazy times … maybe the end is really near.

Days 2-4: Helsinki, Syndrome. Join in the willfully blind, appealing appeasing, wishful group-thought of a typical European capital. Discover the Palestinian leaderships’ quest for peace with Israel. You’ll feel just like a local as you realize Hamas and Israel both want the same thing–Peace–if only Israel would stop its campaign of genocide.

Days 5-8: Malmo, Syndrome. Backpack through the winding, narrow-thinking streets of age-old Jew hatred. Retrace the steps of anti-Semitic thugs from yesterday. For a nominal price, buy a brick from a friendly street vendor and try your luck at smashing a window of the synagogue across the street. You may even hit a Rabbi walking by! As they say, “Lycka till!” (Good luck!)

Days 9-14: Arrival in Stockholm, Syndrome. You’ll be feeling like a real, full-fledged European yourself by this point. Shed your provincial American support of Israel and get fashionable as you slip on the latest cosmopolitan airs of complete sympathy and identification with anti-Israel, anti-Semitic terrorists.

It’s the same problem throughout Europe, and in America it is only mitigated by the good fortune of an expansive geography. Not only do many immigrants exhibit a distinct lack of interest to assimilate the local culture, but the rate of immigration exceeds a reasonable rate of assimilation (e.g. jobs, schools, hospitals, natural resources) by the communities and nations. The left-wing Europeans wanted to exploit democratic and social leverage over their nationalist competitors and now the populations will have to cope with the consequences of that mischief.

That said, they should probably consider the consequences of aborting their children and contracepting their offspring. The principle of evolutionary fitness is non-negotiable. And if they intend to preserve their culture, then they need to ensure that their parents’ religion (i.e. moral philosophy) — ideally backed and strengthened by their faith — is adopted by the next generation.

I recall reading some idiocy by a (blonde-hair, blue-eyed) Swedish Socialist woman who claimed she was excitedly looking forward for the day when Sweden is no longer a white-majority country.

I have no idea how fringe that opinion on the Swedish Left may be, but it was bizarre to say the least.

There is Malmo… and maybe .. soon .. Minneapolis and Dearborn. In the suicidal jestures of “open borders” as envisioned by Teddy Kennedy, we are on the same path to so diverse a society that there are both separate subcultures, but also separate laws that apply… Sharia Law will go from limited chic to general enforcement. No borders, no language, no culture… no Jews ….no Christians…. and in the last gasp… no Progressive Liberals. Dying last is not winning guys.