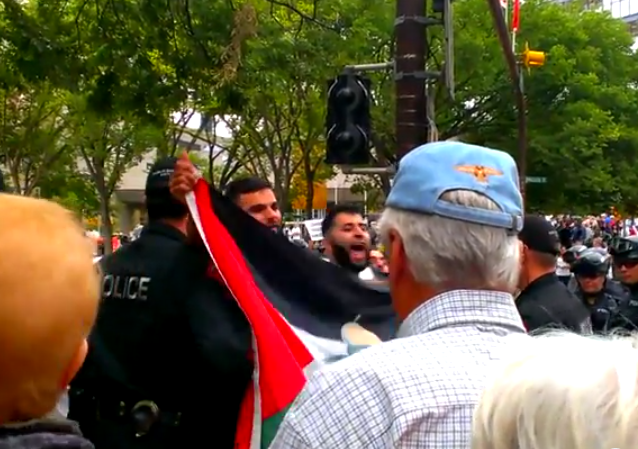 You can add this to the growing list of grossly anti-Semitic, pro-Nazi outbursts around the world, as we noted in Just more “pro-Palestinian” protests: Nazi salutes in Paris, “death to all Jews” in the Hague

After some shouting back and forth, the pro-Palestinian protesters started chanting (at 0:40) “Heil, Heil Hitler.”

More on the protest at Sun News.

This is part of an extensive pattern in which neo-Nazi symbolism, chants and other anti-Semitic slogans are used.

It’s not isolated, but pervasive. And it is something, we have noted, that anti-Israel activists have tried to blame on Zionism itself: 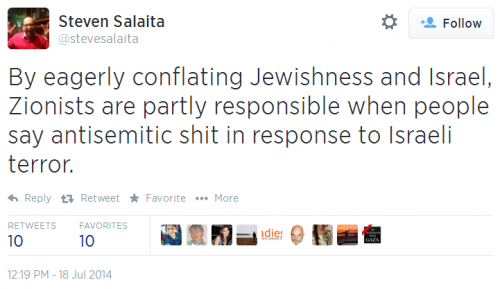 UPDATE: Apparently a local reporter refused to report what was shouted (h/t @jfgroves via Small Dead Amimals via BCBlue) and did not include it in her published report: 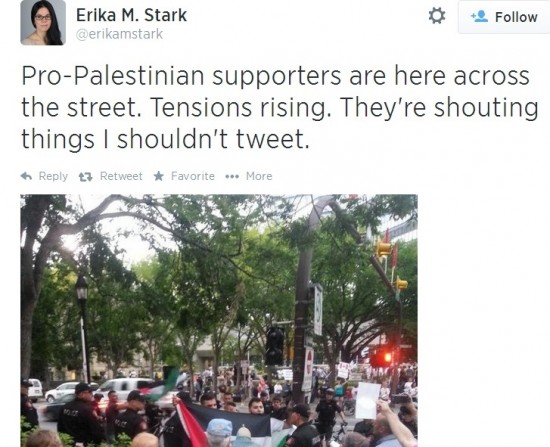 Also, the website EveryDayAntiSemitism is collecting a horrifying array of anti-Semitic signs, tweets and videos.

Where are the Thought Police, eh?

was wondering the same damned thing.
bet if someone said fk muhamed they would be in trouble.

Happily, Mark and his fellows were successful in getting that BS struck down.

Now, Canadians are free to speak as hatefully as these puke do. And that is GOOD.

“Let all the poisons hatch out…” as I like to say. Let them fly their true colors. That marks our targets…!!!

I love the smell of panic in the morning.

The Saudi King aired a 5-minute statement that repudiated Hamas’ actions and ostentatiously omitted any call for concessions from Israel.

This is a big deal.

That’s a purely political play. The Saudis fund Islamic terror groups worldwide and believe in what Hamas is doing. They only disagree as to timetable and method.

If it is a political play, “Hypocrisy is the tribute vice to virtue pays.” And, it is still a very big first. Hamas is finally losing the protection of its alleged religiosity.

Ebola is not all that contagious … compared to anti-Semitism.

The Canadian stance is that “hate” can only come from non-Muslim, non-LGBT, non-Progressive sector of the country. A well-intentioned law to eliminate “hatred” is used by these community groups to damage mainstream culture and tradition. That the USA is so far down this same road that one can smell the sulfur doesn’t register. In a needed world of checks and balances, “borders, language and culture” are needed. Pushing French for all to make Quebec feel “inclusive” has been taken to the extreme particularly by an all encompassing religion that wishes to convert Canada into an extension of the Caliphate.

Here’s my report from yesterday at the Wilshire Federal Building in Los Angeles:

The Israeli consulate is only five blocks from our apartment. I wish I’d known all this was going down as I was off work this weekend.

Our daughter’s office is a block from the federal building. She’s been seeing the occasional nutjob protesters around.

At our former digs in Santa Monica, just across the street from us, a couple houses up the street (north side of Montana Avenue, where the multi-million dollar homes begin) lived a couple in a $2 million + home with new Lexus SUV parked … and, complementing their front-yard landscaping of pretty annual flower beds … a perennial yard sign which read … “A.N.S.W.E.R.”

Unbelievable? Yeah, but, you get used to it around here.

I never thought to hear anyone repeat that contemptible lie about the blood of Christian children being used for Passover Matzohs, except perhaps as a reference to a long-debunked slander that originated in the Middle Ages. To hear it now from a leader of Hamas is sickening; to contemplate the idea that others may believe the same or be swayed to such a belief by this hatemonger’s screed is heartbreaking.

“If you tell a lie big enough and keep repeating it, people will eventually come to believe it.” — Joseph Goebbels

Why. are these people upsetting the local Ukrainian community? God knows they already have to hide Grandpa ‘s swastika collection.

For the consideration of Billy Dyszel, with apologies to Mnn at Work:

He just smiled and gave me an anti-Semite sandwich.

That should be MEN at Work.

Anyway, song lends itself well to parodying a rogues gallery.

Interesting you should use that. Song . The chorus is reminiscent ( later judged to be plagiarism in an exceedingly unpopular decision ) of a 1930s children’s song .

‘ Kookaburra sits in an old gum tree ,
Merry merry king of the bush is he ,
Laugh Kookaburra laugh ,
How gay your life must be ‘ ..

Everyone sings this when they hear the kookaburra & it is a staple of a Orthodox Jewish wedding to celebrate a new & happy life in a country far from the ravages of Europe. Laugh & be happy & a king like the Kookaburra .

Broken noses, missing teeth and broken bones will soon become fashion among these people, voluntarily or not.

Only a sea of Durka Durka and no real Canucks at all. Not one “eh” at the end of their hateful sentences. Just the flotsam of loose immigration policies.

There seems to be some confusion here. The terms “pro-Palestinian” and “anti-Semitic” are use as if they are two different things. I’m sure that was unintentional.

That’s because they aren’t “pro-palestinian”, they’re anti-Israel. None of them have ever lifted a finger to help palestinians.