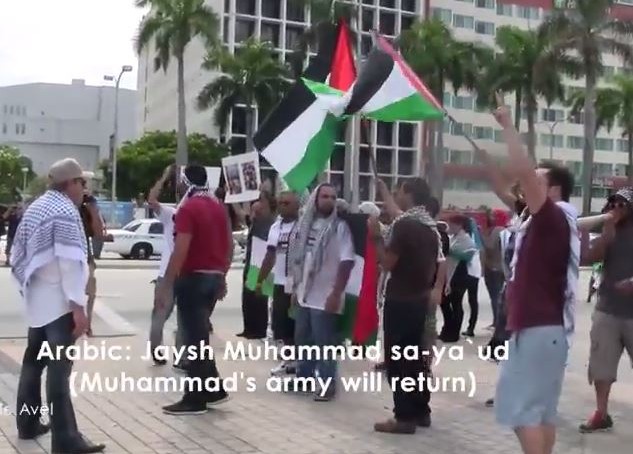 The chant “Khaybar, Khaybar ya yahud” celebrates Muslim victory over the Jews, as this article from the Jerusalem Post in 2013 explains:

Arab TV satellite channels are airing a series this year called Khaybar, referring to the Muslim massacre of the Jews of the town of that name in northwestern Arabia in 628 CE.

After the attack, some Muslims, including Muhammad, took surviving women as wives.

The Muslim conquerors charged the Jews a 50 percent tax on their crops and in 637, after Muhammad’s death, the Caliph Omar expelled the remaining Jews from Khaybar.

In Islamic tradition, the chant “Khaybar Khaybar, ya yahud, Jaish Muhammad, sa yahud,” which means, “Jews, remember Khaybar, the army of Muhammad is returning,” is used as a battle cry when attacking Jews or Israelis.

That was part of the chant at an anti-Israel rally in Miami, via Israel Matzav, who states that the rally was sponsored by CAIR and the National Lawyers Guild, among others (video by Danielle Avel):

I take them at their word, just like I take the anti-Semitic protesters in Paris, Berlin, Frankfurt, Boston and elsewhere at their word. 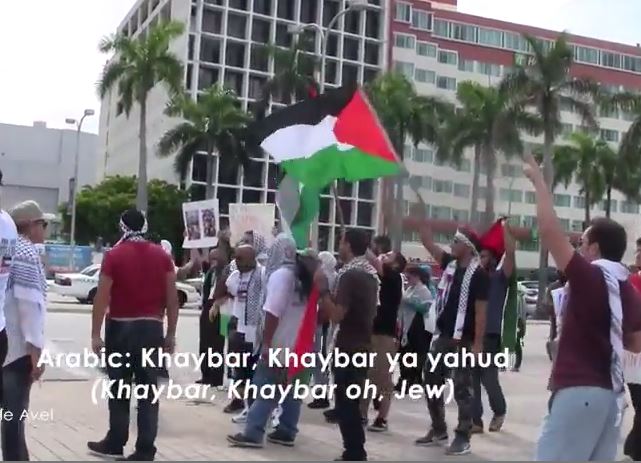 The best response to a threat of war is a preemptive strike.

Was there a Muslim push-back against these idiots that we just don’t know about because our press stinks so badly?

Yes, there has been, including in the Egyptian press, and in Arabic. This is the first time I’ve been aware of such responses.

Malala Yousafzai tells Boko Haram “You are misusing the name of Islam.”
http://abcnews.go.com/International/wireStory/activist-malala-nigeria-bring-back-girls-24547828

Egyptian courts have once again banned the Muslim Brotherhood, mostly due to the terroristic threats of violence by, and actual violence of, its adherents. They are now subject to lawsuits, as well. http://www.atlanticcouncil.org/blogs/egyptsource/top-news-leading-brotherhood-figures-referred-on-charges-of-financing-terrorist-organization

When the Caliphate in Iraq was announced, the derision
http://www.telegraph.co.uk/news/worldnews/middleeast/iraq/10949449/Abu-Bakr-al-Baghdadi-ridiculed-for-flashy-wristwatch.html
proved that Muslims also can ask, “Would Jesus wear a Rolex on his television show?”

It has been a long, hard, slow slog, but another kind of Muslim is starting to recognize and speak against the the Islamist blasphemers.

Rags, there has been Muslim pushback from the get-go, but it does not get much press, and people do get killed for it.

Shortly after the 9/11 attacks, when people in the DC area were writing in, wondering about the lack of Muslim response, a local mosque wrote a letter to the Washington Post on the subject. They got two whole column inches, in the local section of the paper. They didn’t even make the Letters to the Editor, which would have at least been distributed throughout the Post’s delivery area. The only reason I found that letter was because I was searching for an advertisement on another subject.

Also, it was American immigrant Muslims who first blew the whistle on CAIR.

You can find occasional news reports about clerics in Muslim hell-holes getting murdered for counseling decency in the Jawa Report archives. I’m not sure about the search capability.

How are they “blasphemers” when they’re taking their cues from the words and actions of Muhammad, “the perfect man”?

The Khaybar chant is a reminder that Islam was an ideology of conquest and domination from the beginning. The Gaza conflict is like virtually all Islamic wars for the past 1400 years: not provoked by any threats or injustice to the soldiers of Allah, but intended to plunder the kuffar and force them to submit.

There may be some Muslims who have a more civilized philosophy, but the “Islamists” have the core Islamic teaching and many centuries of Islamic practice on their side.

Hit the nail square on the head.

There are also Moslems in Indonesia who preach peace and coexistence. The other Moslems are doing all they can to destroy the peaceful ones.

The most “peaceful” Muslims tend to be at the periphery of the Islamized world — the places that have held onto more of their pre-Islamic ways. The forces of authentic Islam are striving to correct that situation and stamp out jahiliyya.

Islam is a violation of the first commandment anyway. If they actually read the Bible instead of the Koran, they’d see all of the contradictions and falsehoods and drop Islam in the first place.

“Thou shalt have no other Gods before me.”

Their Allah is an invention, a make believe God.

Their Koran bases its authority and authenticity on the Bible, yet contradicts it and promotes violence and hate against its followers.

Now that I review the ten commandments again, I realize they habitually break almost every single one. WOW !

Sounds like our First Amendment will be put to the test soon. Let’s hope its speech protection still has the perfect sweet spot.

“the army of Muhammad” has been attacking for 60 years.

Too bad their cojones are not big enough to fight in the open.

Too bad a tiny little nation has proven to be smarter, stronger and more technologically developed than they will ever be.

You’re right. I was thinking 1948.
I am fascinated by Israel’s accomplishments, against all odds, since its recognition as a state.
If only the neighbors wanted to live in peace.

The Islamists seems to set great store by historical references. If so, it is fair to consult the whole history of the Hebrews. The relationship between the Hebrews and their God has had its ups and downs, but an objective observer might conclude that the Islamists have picked the wrong precedent.

God made promises to the Israelites, provided they followed His commandments, among them the following:

When was the last Hebrew war of conquest?

Who will convince Muslims that the example of Muhammad is “the wrong precedent”?

The Hebrews have not and are not engaged in a war of conquest in the modern era. They bought their land and applied to the local government for statehood. What land they gained since then was by conquest after attack.

The lessons of the Covenant, however, have to do with

As for your other question, I would phrase it this way: “Who will convince the Islamists that this is the wrong precedent?” and the answer is, other Muslims must do this. The only thing anybody else, including the Jews, can do is kill them.

My question about Hebrew conquest was rhetorical. My point is that what Jews have done with that passage from Leviticus for the past 2-3 millennia has no bearing on what Muslims take from their own scriptures and traditions.

If large numbers of Muslims were persuaded that Muhammad is a bad example to follow and that the methods that quickly spread Islamic power over a large portion of the globe were wrong, that would be tantamount to persuading them to empty Islam of its main content and put something quite different inside the vessel.

Meanwhile, many others will have noticed that the traditional methods of violence and threats and deceit are serving to build Islamic power bases in every capital of Christendom and making Western politicians anxious to appease Islam. History and doctrine are on that side of the question.

If the former group manages to win that contest, it will be great for the future of humanity. But when Westerners try to build up “moderate” Muslims, they are often just feeding the tiger. We should instead be quarantining Islam as much as possible and let Muslims sort out the mess made by Islam.

I learned all I needed to know about Muslims in general that day. They are the enemy.

You can be a Muslim or you can be a U.S. Citizen. You cannot be both.

I’m just glad that Israel has finally got the muzzle off a bit and is doing what must be done while the muslim in chief can only weakly protest.

UN rules are worthless because they aren’t followed and they aren’t enforced. The second those rockets were discovered inside those schools was when the gloves should have come off. A cease fire? Get outta here.

My great grandfather fought at Normandy. I’ve seen the newspaper articles and the news coverage from back then, the photos. Was still taught about the holocaust when I was in grade school. Still read Anne Frank’s diary in my literature class.

Mutually Assured Destruction is not a deterrent to these people. They embrace it.

I think I accidentally down-thumbed you – sorry.

You make us like sheep for the slaughter
and scatter us among the nations.
You sell your own people for nothing
and make no profit by the sale.
You make us the taunt of our neighbors,
the laughing stock of all who are near.
Among the nations, you make us a byword,
among the peoples a thing of derision.
…
Awake, O Lord, why do you sleep?
Arise, do not reject us forever!
Why do you hide your face
and forget our oppression and misery?
For we are brought down low to the dust;
our body lies prostrate on the earth.
Stand up and come to our help!
Redeem us because of your love!

That sort of behavior has been common throughout most of human history. Just aren’t many groups left in the 21st century willing to openly advocate its continuance.

All the people at these rallies seem to be Durka! Durka! Very few people who’d likely be Baptists, Episcopalians, Catholics or Buddhists in these crowds.

The real downside? I’ll be it was hard to get a roadie or a Slurpee at any nearby convenience store while this was going on!

How about “Arabs, remember the Golan, the Sinai, the West Bank, and Jerusalem!” All far more recent than Khaybar, and more instructive of the fact that you can’t train uneducated, ill-disciplined rabble in the techniques of modern warfare. Mass attacks by waves of poorly trained fighters has been a losing battle plan since Omdurman. The Soviets spend billions of dollars and sent their best advisors to the Arabs for decades in a fruitless attempt to turn them in a modern military capable of standing their ground with a similar opponent, and they failed. Suck it up, Arabs.

How about “Arabs, remember the Golan, the Sinai, the West Bank, and Jerusalem!”

(Saw that on a t-shirt about ten years ago.)