Harsh or not harsh enough? 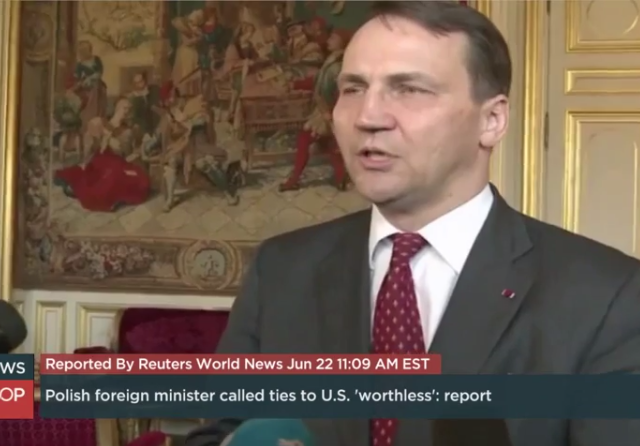 While America’s attention has been focused on Iraq, it is easy to forget the month before we were concerned about Russian interventions in the Ukraine and Crimea.

On another one of his #SmartPower/vacation tours, President Obama in early June went to Poland to promise that he would send aidto address tensions in the region.

U.S. President Barack Obama promised …to beef up military support for eastern European members of the NATO alliance who fear they could be next in the firing line after the Kremlin’s intervention in Ukraine.

Under attack from critics at home who say his leadership on the world stage has not been muscular enough, Obama unveiled plans to spend up to $1 billion in supporting and training the armed forces of NATO states on Russia’s borders.

The White House also said it would review permanent troop deployments in Europe in the light of the Ukraine crisis — though that fell short of a firm commitment to put troops on the ground that Poland and some of its neighbors had sought.

This is in addition to the U.S. Army paratroopers who were sent to Poland in April for a series of military exercises in four countries across Eastern Europe to counter the crisis in Ukraine.

However, it seems that in some quarters of that country, Polish opinion of our assistance is on par with the substantially decreased popularity of our Commander-in-Chief. A Polish news magazine provided excerpts of a secretly recorded conversation with Foreign Minister Radek Sikorski, during which he called his country’s ties with the US “worthless”.

According to a transcript of excerpts of the conversation that was published by Wprost on its Internet site, Sikorski told Rostowski: “You know that the Polish-US alliance isn’t worth anything.”

“It is downright harmful, because it creates a false sense of security … Complete bullshit. We’ll get in conflict with the Germans, Russians and we’ll think that everything is super, because we gave the Americans a blow job. Losers. Complete losers.”

My friend, Rik (Sulima-Suligowski) Fox, is the former Vice-President of the Polish-American Congress So. Cal. Division and the creator of the first officially-recognized Polish Winged Hussar movement in the U.S. Sadly, he concurs with Sikorski’s assessment.

In some regards, In my observation, I may be inclined to agree with him. In my opinion (and that of many other Polish Diaspora here in the U.S.), Poland has been used as sort of a ‘shortstop’ in the affairs of the world; covering the holes of necessity when and where they are needed but not really given the equal reciprocation and due respect that should go along with that due credit and respect. Whenever the U.S. needs Poland, then they come, hat in hand full of promises.

[For example,] President Obama clearly stated from the beginning of his term of office, that he would make removing the Visa Waiver program one of his priorities, and, like most of everything else he’s promised, it’s all been hot air and pipe dreams, with absolutely no concrete results whatsoever. Meanwhile, on the surface, for the public display, it’s all smiles and handshakes.

In other regional news, the European Union has just enacted a ban on imports from Crimea as part of its nonrecognition policy toward the “illegally” annexed region.

A press release from the EU Council of Ministers on Monday stated that, “As of June 25, goods originating in Crimea and Sevastopol may no longer be imported into the European Union. In addition, it will be prohibited to provide financial and insurance services related to the import of such goods.”

Meanwhile, our SmartPower Secretary of State is in Cairo working his charm on the newly elected Egyptian President.

Secretary of State John Kerry arrived in Cairo on Sunday and met with the country’s newest president, Abdel-Fattah el-Sissi.

Yes…telling Egypt’s new head of state who managed to get a terror organization on-the-run in his own country is a great way to kick off an international friendship!

It looks like it just a matter of time before even more world leaders come to the same conclusion Sikorski did.

Yikes, when the anti-communist Poles no longer want America’s help you can be sure America has frittered away it’s reputation.

Yikes, when the anti-communist Poles no longer want America’s help…

That’s a problem when there’s a “Progressive” Democrat in the White House.

“It looks like it just a matter of time before even more world leaders come to the same conclusion Sikorski did.”

Dude…!!! You are WAY behind the curve.

Name a nation we have traditionally had good relations with that thinks they can depend on the Obami.

Or a nation we are aligned against that takes them seriously.

As to this Pole…I wonder if he would consider working for the NEXT American administration as a presidential adviser. Anybody with that kind of insight AND candor would be GOLD…!!!

This is looking a LOT like the world before the world wars. Before the US became a super power.

Glad Poland (or at least some in that nation) get this. The bad thing is, given Poland’s history, they will be chief among the ones in Europe who suffer because of Obama’s “fundamental transformation of America.”

If Poland, by all accounts a second-rate power (sorry, but true), feels free to insult the President of the United States, no doubt we are in decline.
On the other hand, Poland *should* play greater role in the world and be more self-reliant (and so should Germany).
It’s a shame that we can’t get a smooth visa program with Poland (or offer asylum to more Belorussians).
As for Poland today being somehow anti-communist… I don’t claim to know much about Poland, but I suspect they are more appropriately called “post-communist”. Many of their leaders are former Communists turned nationalist.

The US has been messing over Poland for many years. Actually, the US Dept of State has, regardless of who the Pres was.

The Poles deserve a better shake than obamullah is willing to give anybody except his secret muzzie allies.

These people stood up to a barbaric, tyrannical government and won.

When is the last time WE did that?

The American feminazi movement has turned the last two generations of American men into a bunch of pussies. This country doesn’t even have the cojones to stand up to this POS would-be dictator ‘occupying’ the White House or these thugs swarming our southern border.

What a disgusting contrast between a stalwart people such as the Poles and what we’ve become.

There is no “We the people” anymore. It’s just “Shut up and pass the food stamps!”

I don’t get along with many I know, but regard them all as d##n fine people.

Obama’s help for Eastern Europe has not been worthless. For the Russians it is priceless.

Sad but true. But I doubt anything will change. In Munich before the Second World War the West rolled over so much that Hitler did not believe it. He thought we were play acting and buying time to launch and invasion of Germany.

But they didn’t. And it is pie in the sky to think they ever would, or will now.

What Obama would be if he was not a lazy, worthless, etc.

It’s a nice thought, and while I am no expert, I doubt it could have been done. When she crossed into CZ and Poland, Germany was at the height of her military puissance. And she operated on internal lines of communication. Nowhere in the world was there a comparable force, much less lifting capacity to move it to contact and maintain it in battle. Military men at the table threw their pencils in the air when Albright remarked something to the effect, “Well, why don’t we just put troops in the Balkans and solve the problem.” It was the mastery of such considerations within months after 11SEP01 that enabled the extraordinary movement of US and soon Coalition war-fighting power into Afghanistan. And then Iraq. There was no such ability anywhere in the world in 1939.

The USA owes her existence to a Pole: Andrzej Tadeusz Bonawentura Kościuszko. Had he not defended West Point, Brits would have split the colonies and chewed the pieces with afternoon tea. A large and rightfully powerful Polish Diaspora lives in the USA. For example, see principals of this institution: http://www.iwp.edu