U.S. troops arrive in Poland for exercises amid Ukraine crisis

U.S. troops arrive in Poland for exercises amid Ukraine crisis 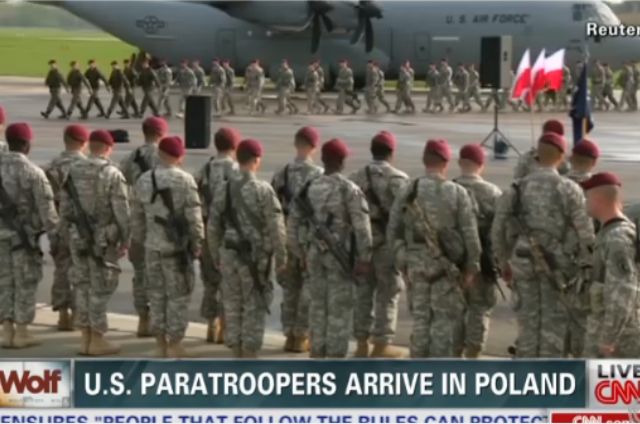 U.S. Army paratroopers began arriving in Poland on Wednesday for what will be a series of military exercises to occur in four countries across Eastern Europe as the crisis in Ukraine continues.

A contingent of U.S. Army paratroopers arrived in Poland on Wednesday, the first of what will be a “persistent presence” of U.S. troops as the crisis in nearby Ukraine continues to unfold.

The company-sized contingent will conduct training exercises with Polish counterparts and is visiting at the request of Poland.

The joint exercises are a symbol of force as the conflict in Ukraine between pro-government and pro-Russian factions continues unabated. The United States and Russia accuse each other of fomenting unrest in Ukraine.

The U.S. troops stood in formation at an airfield next to Polish troops as military leaders from both countries addressed them, reiterating the alliance between their nations.

“Poland has been there for the United States, and today, as the transatlantic community confronts Russia’s unacceptable aggression against Poland’s neighbor, Ukraine, a sovereign and independent state, we have a solemn obligation in the framework of NATO to reassure Poland of our security guarantee,” said Stephen Mull, the U.S. ambassador to Poland.

The United States will maintain a presence in Poland at least through the end of the year, he said.

The exercises will be part of a rotational presence in the area, and will also take place in Estonia, Latvia and Lithuania as well.

Pentagon press secretary Rear Adm. John Kirby said an initial contingent of about 600 troops will head to four countries across Eastern Europe for military exercises over the next month.

First, about 150 soldiers from the 173rd Airborne Brigade Combat Team based in Vicenza, Italy, are arriving in Poland.

Additional Army companies will head to Estonia, Latvia and Lithuania and are expected to arrive by Monday for similar land-based exercises in those countries.

[…] Under the current plan, U.S. troops would rotate in and out of the four Eastern European countries for additional exercises on a recurring basis.

“We’re looking at trying to keep this rotational presence persistent throughout the rest of this year,” Kirby told reporters, adding that over time the exercises could expand to other countries.

Last month, Vice President Joe Biden visited Poland and Lithuania to reassure U.S. commitment to its NATO allies and to discuss ways to strengthen the alliance.

This week, Biden spent two days in Ukraine visiting with interim government and organizational leaders amid the ongoing conflicts with pro-Russia separatists in the eastern area of the country.

I’m sure that Vlad is quaking in his boots.

Does Poland do anything for itself ?

Somebody posted elsewhere the fact that the EU started all this & has now hoisted this onto the US .
All of the instigators eg ‘Baroness’ Ashton have gone to ground.

The US dragged into the eternal Catholic vs Orthoddox wars .I guess it is a change from fighting the muslim wars.

Meanwhile there are definite Sino- Japanese rumblings both of higher economic importance to the US .

That will stop Putin from invading Poland – for now.

Of course, he had no intention of invading Poland – for now.

Of course not. He’s eying Moldova.

173 is a storied Reg/BDE. 600 means a BTN split by CO to several AOs (nations). Division of force. Not a combat deployment. PR. Every General Staff in the world will see that. Top news of the day is Benghazi shows regime switched sides in “war of terror,” a tragic misnomer.

They are there as what is know commonly as a ‘Trip Wire’ force. The US can use them as an excuse to act in order to protect them. And, if the force is attacked or wiped out – that becomes the pretext for retaliation.

Speaking of 1500 year old catholic vs Orthodox chism , Yatsenuk is off to consult the Pope.this week .