Many polling stations closed in the east. 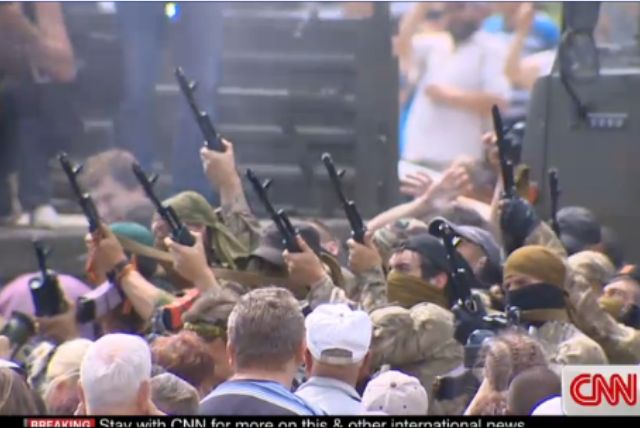 Sunday was election day in Ukraine, and while turnout appeared heavy at polling stations in Kiev, it was a different scene in portions of the east.  Nonetheless, Petro Poroshenko declared victory after preliminary exit polls signaled he’d won the majority of the votes.

His closest challenger, former Ukrainian prime minister and leader of the Batkivshchyna party Yulia Tymoshenko, conceded the election after exit polls showed her with 13% of the vote.

Poroshenko, a candy tycoon known as the “Chocolate King,” is also a seasoned politician.

The election took place Sunday despite a recent wave of deadly violence in the east and threats by pro-Russia separatists to prevent citizens from casting their ballots.

In February, Ukraine’s parliament ousted President Viktor Yanukovich from office and named an interim president, which was followed of course by months of continuing unrest, particularly in the country’s eastern region.

Many of the polling stations were closed Sunday in the east, according to the Associated Press via ABC News:

Yet the question of who was able to vote Sunday loomed large over the democratic process. Some 35.5 million Ukrainians were eligible to vote, but separatists in the eastern Donetsk and Luhansk regions — which have 5.1 million voters — have vowed to stop the vote.

Military operations had eased for the day, but an AP reporter heard heavy gunfire in the afternoon in the Luhansk region town of Novoaidar.

Little voting was taking place in the east. The regional administration in Donetsk said only 426 of 2,430 polling stations in the region were open Sunday, and none in the city of Donetsk, which has 1 million people. There was no voting in the city of Luhansk either, but some stations appeared to be open in the wider Luhansk region, according to local officials.

President Obama commended Ukrainians for showing up to the polls, despite the obstacles they faced.

President Obama congratulated Ukraine on its election Sunday, particularly citizens in the east who voted despite the efforts of “Russian-backed separatist groups” that “sought to disenfranchise entire regions.”

In a written statement — issued while Obama was making a trip to Afghanistan — Obama said that “we commend the resolve of all those who participated, as well as the efforts of the Ukrainian government to conduct these elections in the face of those threats.”

Russian President Vladimir Putin said in the days preceding the election that he would respect the vote and work with the winner of Sunday’s election.

Why was my first thought, on reading the headline, of Sammy?
http://youtu.be/zRf1Ad_Txsg

Poroshenko (“parasha” means toilet in Russian slang, btw, so jokes about the guy abound) had been on all sides of Ukrainian politics.
Russians said the turn out in Kharkov and Odessa, the next two regions to watch, was low, and Western journalists rarely venture outside of Kiev. Anecdotally, I think Russians were right because a) population didn’t have a candidate and b) the were rumors that it wasn’t safe to go to the polls (hogwash, nothing happened).
It’s safe to say that the elections in Donetsk and Lugansk failed to happen.

In Ukrainian, on the other hand, “poroshenko” is the diminutive of the word “porox” which means dust and is often used to convey the meaning “a dusting of … ” Just an FYI.

He is not exactly a new broom.