Welcome to the Crimean Soviet Socialist, I mean Russian, Republic

Welcome to the Crimean Soviet Socialist, I mean Russian, Republic

Putin basically pledges Not One Step Back from annexation 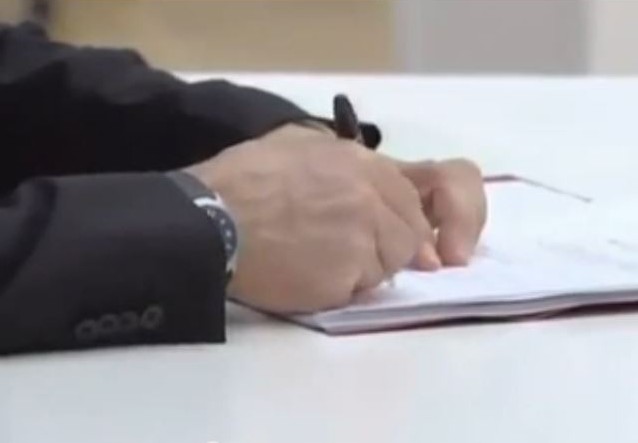 President Vladimir Putin signed laws completing Russia’s annexation of Crimea on Friday, as investors took fright at a U.S. decision to slap sanctions on his inner circle of money men and security officials….

In a Kremlin ceremony shown live on state television, Putin signed a law on ratification of a treaty making Crimea part of Russia as well as legislation creating two new Russian administrative districts: Crimea and the port city of Sevastopol, where Moscow keeps part of its Black Sea fleet.

Putin basically pledged Ни шагу назад! (Not One Step Back) on the annexation.

Well we know what Putin thinks of Americas “sanctions” now if we didn’t before.

Oh boy, Obama’s gonna put his foot down now. Gosh, I wouldn’t want to be in Putin’s shoes when he does.

How Michelle Obama’s “Let’s Move” campaign is interpreted at the White House.

And how it’s interpreted at the Kremlin.

Wait till Obama learns that Putin is also, as we speak, moving Navy warships and long range bombers into the Caribbean and South America. THEN he’s gonna do something, you just wait and see!

I wonder how many more will be “willing” to join…

Any area of any country in the world that has an identifiable ethnic Russian population: Estonia and Latvia come to mind yet Estonia is probably a prime Putin target due to its geography by the Gulf of Finland. Latvia, its time shall come when Putin’s ready and not before unless Obama tries to push back on Chairman Putin.

Also Lithuania so that Putin may have a land route to Kalinngrad, maybe a mere 50-mile wide strip of land deeded to Mother Russia.

And, lastly, Brighton Beach,where Putin’s comical actors are hard at that work now, inflaming that population. BTW: Mayor de Blasio most likely will assent to anything that Putin wishes.

Of course, also South America is moving towards Mother Russia already in an act of solidarity with Putin.

For one, Russian state TV is airing weather forecasts for all Kharkov, Donetsk and Lugansk, which are technically within Ukraine’s borders. For another, they are trying to litigate Alaska back in American courts.

This is not about a Soviet revival. Putin is likely concerned about preserving stability and integrity in a Russian sphere of influence. The same concern which pervaded American politics in the past, since our nation’s inception, and has formed the basis for a pseudo-global empire.

That said, Putin’s concerns about the interference of foreign sovereigns in the Russian sphere of influence and in Russia itself are justified. This began in Egypt, probably earlier, but the covert meddling happened around this time. It was flippantly described as an “Arab Spring”, but was factually a changing of the guard to support the current administration’s objectives. It continued to Libya, which was a surprise to everyone, including our own Congress. It spread to Syria, and culminated in a coup d’etat in Ukraine.

I can only guess that Russia’s successful block of American and European-backed “civil war” in Syria was the impetus for backing a coup in Ukraine. There are clearly political and economic interests. There may also be some narcissistic vindictiveness. Egypt was fairly easy, but inconclusive. Libya was a cakewalk. Syria was the first stumbling block for American and European imperialism.

Anyway, stay cool, Putin. It’s just a game staged by egos between nuclear powers, which is why everyone wants to join the club.

The thing that annoys me most about this whole saga is how people make it out to be a saga. Yes, yes, he could do this, he could do that, he could do a lot of things, but what he actually did was move troops into an overwhelmingly friendly area to him to secure Black Sea naval access against potential and actual mischief, and secured it with barely a single shot anywhere. Also he really, really annoyed a lot of people he enjoys annoying.

Why spoil it? He’s running plays out of Sun Tzu’s playbook and doing fine. The only people who’ve been talking about making a bloody mess of the place are the Ukrainians, and even they’re lowering the tone slightly.

You are right, he moved his troops into a friendly place, and he already had a base there. I think his ambitions go a bit further, though, and he’s going to chop off the south-east Ukraine, which is also friendly to him, although somewhat less so.
Turns out, there was a Ukrainian action adventure book about this very campaign that came out a few years ago, and that everyone at the time considered to be too far-fetched. Here is a Russian-language synopsis:
http://pravdatoday.info/content/vstavay-strana-mobilizaciya-po-ukrainski

jBourque: “what he actually did was move troops into an overwhelmingly friendly area to him…”

On the contrary, what he did was violate the explicit language of the Conventional Armed Forces in Europe Treaty that he signed only twenty years ago.

snopercod, did you say treaty? I can hear Vladimir laughing sitting here, in California.

i see that George Will. has stated that Putin’s aim is to break NATO .

Well that & every other other grouping eg G20 G8 OSCE that has been strutting around . he suspects they are just big letters. Even the missing airplane is playing into the belief that all these international organisations are flimsy .There is no international air supervision / control. Everytime we fly we have no concrete assurances we will not go missing also .

In terms of sanctions , Russia will play a price but things are so competitive out there for every contract , someone will break.

It is definitely a game of risk but he has all of Snowden’s files .

Putin is waiting for Ban Bossy to hit the US military .