We have noted in the past how many mostly white liberal organizations obsess over Republicans being mostly white:

The latest example is Bloomberg News, named after this well-known white person:

I was alerted to an August 1 news analysis by a tweet terming a Bloomberg News article “The dumbest article on the internet right now.”

That’s a rather Big Gulp to fill, if you ask me, but I think it’s warranted: 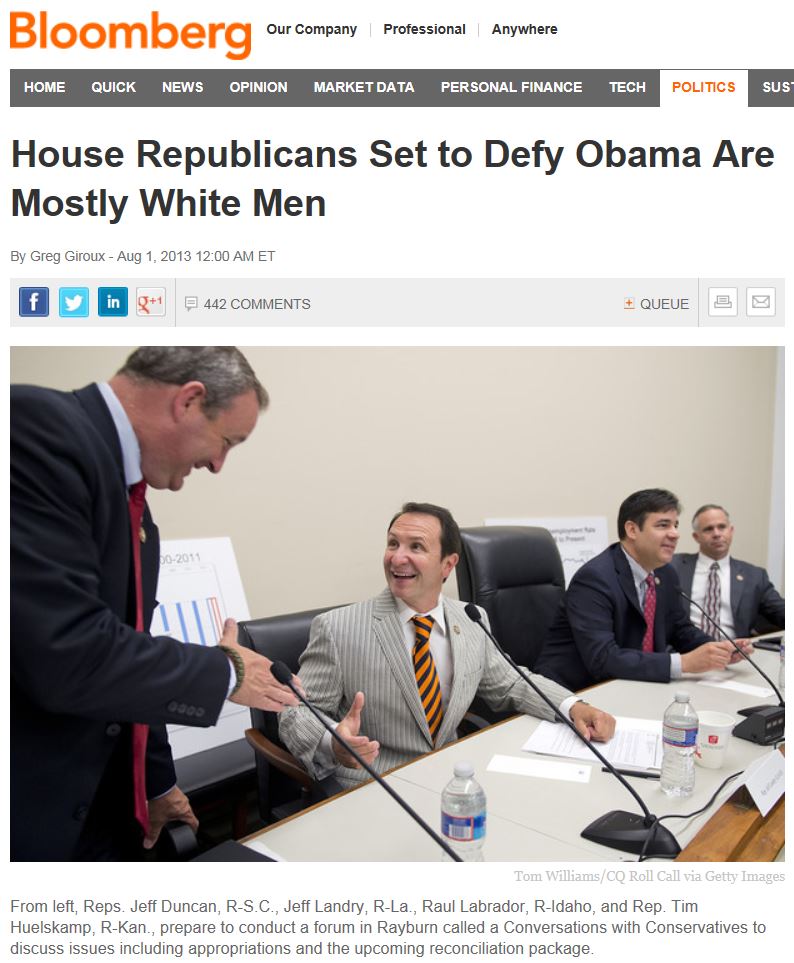 The core group of Republicans who are pushing the House toward a showdown with the White House over the debt ceiling and government spending is made up of 41 members — all white men except for two.

More than half are from Southern states, their average re-election vote was 65 percent and most have served for fewer than five years in the House.

This small, homogeneous group of lawmakers is exercising out-sized influence as it bucks the House leadership, eschews compromises with President Barack Obama and exerts a rightward influence on a Republican conference of 234 members.

What does race and gender have to do with it?  I posed that question to the reporter, Greg Giroux, who is white:

And the Editor in charge of the article, Jean Cummings (formerly of Politico), who is white:

My email was as follows:

I’m going to be writing about your story tomorrow, and was wondering if you could give a statement as to why you deemed it relevant to focus on the race and gender of the people in Congress opposing Obama.

If you could respond by 10 a.m. Eastern [Sunday], that would be appreciated.

So far, no response.

This type of distraction is all too common. Remember when WaPo played the same game regarding Republicans who signed a letter opposing the potential nomination of Susan Rice? WaPo plays the Rice card:

“Could it be, as members of the Congressional Black Caucus are charging, that the [97 Republican House] signatories of the letter are targeting Ms. Rice because she is an African American woman? The signatories deny that, and we can’t know their hearts. What we do know is that more than 80 of the signatories are white males, and nearly half are from states of the former Confederacy. You’d think that before launching their broadside, members of Congress would have taken care not to propagate any falsehoods of their own.”

WaPo ignored, of course, the attacks on the other Rice (Condolezza) by white Democrats.

I think it would be good to get answers from Bloomberg News as to why the focus on the race and gender rather than the policies.  Particularly since the leadership of Bloomberg LP doesn’t itself exactly “look like America”:

Let’s hope it doesn’t turn into an obsession at Bloomberg News, or I might start confusing it with Salon.com: 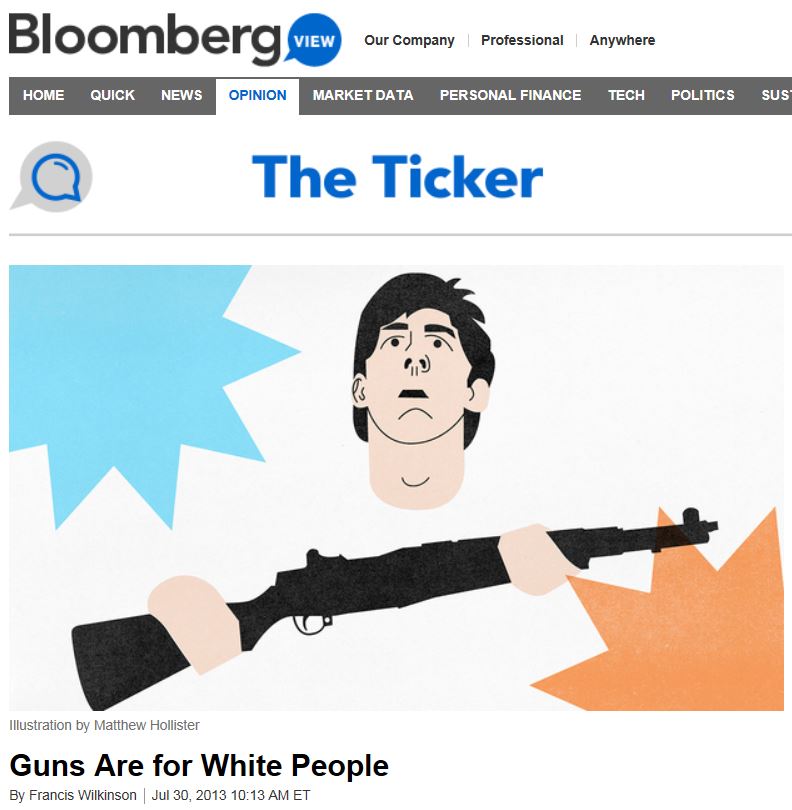 How about this: “House Democrats Set to Support Obama Are Mostly Black Men” ..

Hell, half of Obama is white.

One-third of adult black men are currently in some stage of the penal system.

One-half of gun homicides in this country are committed by blacks.

Whatever will these poor souls of the Democrat party & Liberal Media do when there is no longer a “Black Man In The White House?”

From now on all Democrat candidates will be either a minority or female. And if they are neither they will just claim to be a minority and nobody will question them on it. Speaking of which, what race do you think Joe Biden will try to claim when he fails at running for the Democrat nomination?

“I have a dream that my four little children will one day live in a nation where they will not be judged by the color of their skin, but by the content of their character.”

Seems the Bloomberg whities have it all backwords. But you know, the topic of racism sells big these days. The topic is now a profit center.

Yep, Sally, and that same Dr.King was dead set AGAINST the mere concept of “Affirmative Action”. Time & Time & Time Again he made it clear that special priviledges and extra
‘Make Ups’ and boosts for skin color wasn’t what he believed was good for our country and wouldn’t work. How’s that 45-years of The Great Society doing, Folks??

Or, as the Great Dr.Thomas Sowell would say:”You CANNOT possibly make this s*** up.” But, of course, that rock ribbed, brilliant neoconservative is a WAAACIST..! (-:

All of this stirring of the racial pot is almost a laughing matter for most of us who visit this site regularly, but that does not mean it is not effective with its target audience.
It is profoundly troubling that we have descended to this level of stupidity, and I fear we have further to fall.

Liberals are the definitive racist party and can only defend themselves by falsely projecting their rabid racism on the Republicans. Everything, especially excuses for their incompetence and fecklessness, is blamed on the so called “racism” of Republicans, particularly since Øbama was elected.

Liberals find racism under every rock because that is where they live.

Here is a balancing headline: “Congressional Black Caucus, which is mostly Black, focuses exclusively on issues of Race.”

I hate it when we play their game with their rules. The color of their skin is only relevant in order to understand that the issue of merit is competing interests. This is about people, white, black, and other, competing for finitely available and accessible resources, and to dominate other people, white, black, and other. The rest is a forced or indoctrinated prejudice, which denigrates individual dignity and devalues human life in order to, ironically, advance individual and a select minority’s political, economic, and social standing.

As for Obama as white or black or white/black or black/white… it’s no wonder that so many people are confused.

Isn’t that a KFC cup that Bloomberg is holding?

Hey, Colonel Sanders was a white man. I think there’s a trend here.

So nearly 5% of these Republicans are non-white.

But that writer with the smug smirk … that dude is whiter than the salt sprinkled on Rangel brand white crackers.

Most of the comments to the article at the Bloomberg site reflect your criticism of the unwarranted implied racism/sexism of the congressmen opposing Obama.

My favorite comment there, succinct and to the point, was: “F-you.”

What continues to amaze me at places like the NY Times and Bloomberg is the generally high number of comments opposed to their editorial positions on topics like race and immigration – and yet they continue to skew those topics in commentary and editorials. They just won’t listen to their own readrship.

That “F-you” aimed at the Bloomberg people, not you William A. 🙂

If I were running a website whose business model was centered around trying drive traffic to the website so I can charge advertisers more, one way of doing would be that is to put out inflammatory headlines as “bait” to lure people there with the promise of being able to post a comment about how wrong the article is.

Best way to respond is not to open the link and read the articles. The authors and editors don’t care whether you like or agree with what you wrote, they just want the traffic to their site so they can charge their advertisers more.

This isn’t a “distraction”, this is a concerted political strategy by the Democrats. Ok, lets break down voting demographics. Separate Americans by race and how to their political leanings shake out? Most African Americans and Latinos lean Democrat. Only white people tend to lean Republican in many areas. The Democrats are also seeing a problem particularly in the South where you have more black politicians leaving the Democratic Party and becoming Republicans. How do you stop that? You portray Republicans as white racists to try to prevent others from considering switching parties.

For example, NAACP’s Board of Directors … I think I saw one person who MIGHT be “white” on their board.

Didn’t Chris Matthews apologize for us?

Has anyone told “Reporter” Giroux that most of those 39 “white” Republicans are said to be at least 1/32 Cherokee?

Cheekbones don’t lie. These are obviously men of fractional color.

I’m afraid it is true. All the problems with racism can be traced to white Republicans. Lets go back about 150 years ago. There was no Black unemployment to speak of because most were busily “employed” on plantations. There was no welfare problem because plantation owners supplied their food and housing so that they could put in a good 10 to 15 hours at labor.
Teenagers were kept too busy to get in trouble and there were few family problems because plantation owners split up families as soon as they could.
Then along came the racist Republican Party and Abe Lincoln who freed the slaves and began this terrible cycle of racism.
Good, loyal Democrats have been hard at work ever since striving to get Black people back on the plantation and to keep them there. If they have to lie and misrepresent, it’s okay because it’s for the greater good, the Democrat Party’s greater good.

“Old white men” or “white” men is feminist code for anti-liberal, anti-abortion, “war on women” propaganda. This is the news source attempting to feed urgency and build meme in favor of Democrats and against Republicans in the coming election.

Translation: Alert! Notwithstanding all the bad things Democrats have done, and your feelings about the economy, you must vote Democratic or you will turn back the clock to rule by white men.

Judging from the photo accompanying the Mostly White Men article, one of those white men is completely color blind.

We now return you to your previously scheduled serious discussion.

Gosh, we were once a lucky country. Tip top universities used to teach the brilliance from the “Dead White Males.” You couldn’t get in if you couldn’t do calculus. And, you had at least 4 years of Latin under your belt. That’s all gone now.

Maybe, someday, we’ll go back to the old system? Calling Bloomberg, or Congress, as bodies filled with white men overlooks their strange incompetence.

When was our last great general born? MacArthur was born in the late 1800’s. Patton. In the same time frame.

Then we got involved in losing battles. (I don’t blame MacArthur for Korea. Truman was using Korea to unermine MacArthur.) And, then, of course we come to Robert McNamara, credited with making Detroit rich. And, we got “Dr. Strangelove.” Westmoreland. And, Curtis LeMay.

Countries that seek peace have no mechanism available where tip top generals rise to the fore.

While I also doubt Anthony Weiner can win the mayor’s race. By now you’d think we’d have understood fetishes better. And, how they’re genetically linked. (Though Weiner’s closet can only be filled with flashers. Cell phones just twisted this and brought in a new angle.)

Plus, most people with fetishes burn up a lot of energy to keep their “tastes” under the table.

[…] Linking to Bloomberg.com’s racist article headlined “House Republicans Set to Defy Obama Are Mostly White Men,” which we linked to last night, Prof. William A. Jacobson of the Legal Insurrection Blog writes an open letter to the “news” Website: […]

You are too kind. Not only are they all crackers but one is a fat cracker.