Should U.S. Senate candidate Elizabeth Warren be investigated for possibly practicing law without a license?

I heard about the poll in an email just after 1:30 p.m. today.  I did not publicize the poll because while online polls are not scientific, I also didn’t want someone to say that the results were skewed by me publicizing the poll.

But, I figured that if the poll was getting attention, it would be interesting to see what it showed prior to the storm.  So I took an image of the results as of 1:37 p.m., and the vote was 3-1 in favor of an investigation: 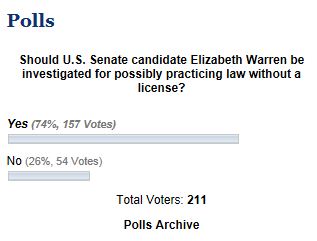 I checked back in and there was no sudden surge.  The “Yes” vote climbed steadily throughout the afternoon, while the “No” vote didn’t move much.

This signals to me that while a little publicity probably helped the “Yes” vote, few people were coming to Warren’s defense.  Here are the results as of 7:05 p.m.: 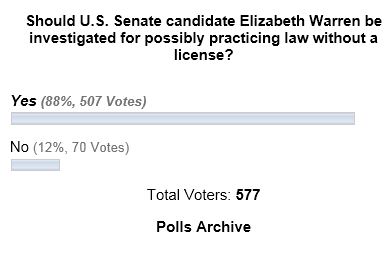 Elsewhere in Massachusetts, the students who blog at Harvard Law School Is Bogus website (background here) are mocking Laurence Tribe, one of Elizabeth Warren’s defenders on the licensing issue, The Anti-Hero of Harvard Law School:  A Post-Modern “Paper Chase”.

And Scott Brown is not letting up on the fake Indian issue. It’s good to see that Brown is not backing down after the “Tomahawk chop” incident:

A Warren ad during “Katie” today showed her repeating the family folklore. “My Mother said such and such, and my Dads family rejected her because she was Cherokee and Delaware.”

It’s sad to me but her people must be pushing some kind of ethnic cultural meme, “WHAT YOU SAY BOUT MY MOMMA”. Pandering to the little folks, I guess.

So what she is really saying is that she is descended from a long line of bigots.

Since it is patently obvious this woman has no shame, the best way to take her down is simply expose the truth.

When Scott Brown gives his victory speech on the evening of November 6th, Warren will have no one to blame other than herself.

BTW, I wasn’t watching Chelsea Handler (gag me) on Katie. I was folding laundry during General Hospital(wink)and hadn’t changed the channel yet.

But from what I saw of ‘Katie’, she is trying way too hard.

Elizabeth Warren must sure hate all this stuff the professor is digging up about her. Scott Brown needs to thank Mr. Jacobson for all the work he has done exposing the fraud that is Warren.

Before we execute the prisoner, and in the interest of fairness and thoroughness before taking irreversible action, do you suppose there is any possibility whatsoever that Warren meant she was descended from Jeep Cherokees?

Thanks Henry for opening up THAT can of worms.

Now, if anyone with the Brown campaign who drives a Cherokee or anyone with a Scott Brown bumper sticker on a Jeep Cherokee is going to get painted by “journalists” like Mary C. Curtis as “racist.”

Or, if you are implying that she was conceived in a Cherokee, then the image that follows is one involving contraceptive choice, etc., at which point you are waging a war on women.

I believe Henry is on to something.
Dare we say that “Lizzie Warren is related to The Jeep Cherokees, but only by FIAT”?

fi·at/ˈfēät/
Noun:
A formal authorization or proposition; a decree.
An arbitrary order.

Oops, I’ve cracked myself up again.

Er, that was my joke. I posted it weeks ago here, and all over the Internet:

What were the chances you found the one person in the world who hasn’t read a thing you’ve ever written?

When you posted ‘your’ joke, did you credit LukeHandCool, who posted it in the LI comments on July 16, 2012, six weeks before you did?

Who needs a BBO investigation when “General Counsel” Michael Fredrickson has already come up with the conclusion. Lizzy Warren’s in the clear. He’ll probably conclude that she doesn’t need to pony up any back dues either; he might figure out a way that the BBO owes Warren money.

All these connected Democrats are going to find a way to say that Warren has fully complied with all laws. This stinks. And they believe, they really believe, that they have integrity and that the public should give them trust.

I hope you’re wrong, but in any case, why not go Alinsky on her by holding her to her own rules? She’s a big proponent of union rules and all sorts of regulations. She also wants to make sure the rich didn’t get that way by not following the rules. Well, was she following the rules when she got rich? Or was she charging $675/hour for work she couldn’t legally do? And from a university office? And from how clients, total? And for how much money? Let’s get it all on the table, Professor Warren. You are asking the voters of Massachusetts to trust you as their representative in Washington, so prove that you are trustworthy.

I want to see this advocate for regulation squirm as she comes up with complex excuses for not following the sort of regulation she always wants more of. The fact that she hasn’t really answered these charges indicates to me that she can’t, or at least can’t do so easily. Die-hard Democrats might vote for a weasel, but many independents will not.

It might be a stretch, though not entirely implausible, to surmise that Warren might have violated some Harvard rules along the way. Is anyone connected enough to find out? And if so, does being ten

And, if so, does being tenured essentially make her immune to meaningful discipline?

Says a lot about lawyers. Her wacky politics don’t phase them at all, but violate the guild rules and you are toast!

Bingo!!! Getting yourself to and through law school, let alone Harvard is extremely difficult. Don’t tell me that Warren’s shenanigans don’t reflect poorly on the profession and HLS as well. Keep it up, Professor.

Lawyers do not like their guild being gone around. Elizabeth Warren better not upset Mass trial lawyers!

She not be upsettin trial lawyers; she be writing consoomer laws.

Don’t tell me that Warren’s shenanigans don’t reflect poorly on the profession and HLS as well.

9thDistrict: Having grown up in Cambridge as a Harvard faculty member’s child, I can tell you for sure that “you will never find a more wretched hive of scum and villainy” as reside in that community. If they think for a moment that she might besmirch the reputation of the University or the law school, she’ll be under the bus faster than Obama’s grandmother.

I heard an associate refer to her as ‘Granny Goodyear’ and wondered, then ‘got’ it.

[…] Sept. 28, 10 p.m.  Welcome Legal Insurrection Readers!  We appreciate Professor Jacobson linking to us, and all of his past assistance against […]

A Republican who won’t back down? Mirabile dictu!

To be fair, there are GOP warriors like Rep. Peter King and Rep. Allen West, and a host of great GOP congressmen and women swept into office in 2010.

We’ve simply got to get rid of the corrupt hacks entrenched at the top. (Hear that Boehner?)

First, I want to say that all this is excellent work, Professor.

Also, has anyone else realized how much Warren is starting to seem like a female Ward Churchill? Left-wing academic firebrand games affirmative action by claiming Native American blood, publishes shoddy research which somehow gets a pass, dabbles in plagiarism (research and art in his case, recipes in hers), and seems to get paid and promoted beyond their worth… until widespread scrutiny causes it to all come crashing down.

In some ways she’s worse: the supposed champion of the 99% and mortgage abuse was happy to take money from Evil Corporations Screwing the Little Guy, and make some more on foreclosed houses. Ward Churchill was a fraud, but I’m not sure he was a hypocritical fraud.

Finally, I think Brown and his supporters should lay off the tomahawk chops and such. They’ve made their point, and it does seem racist to some. (I know it’s not, but it’s pointless to agree with the offended, or the pseudo-offended.) The Indian thing is just one part of a pattern of self-serving fakery. Go after her on her research, her law license, making money from the sort of thing she condemns, using her Harvard office for outside work. Ask her to reveal her tax returns and law client list. Generally I don’t like character attacks in politics, but sheesh, I don’t want an outright fraud in the Senate, no matter how they vote.

There is quite a lot of similarity indeed – I recall that Ward “Little Eichmanns” Churchill also plagiarized some artwork [I believe] from a professor in Quebec. Claiming fake ‘injun status and plagiarism appear to go hand-in-hand.

I agree entirely! Professor, if you have any law students who share your principles, might a couple of them be inclined to do some plagiarism research on Warren? If she ripped off recipes for “Pow Wow Chow,” she might have ripped off others’ academic work as well. I saw an article today about a popular professor at Amherst accused of years of plagiarism who recently resigned in disgrace. Her students could not believe it – until they ran sentences from her writings through Google and other plagiarism detecting software.

Professsor: Is the MLW poll open to anyone or just MA lawyers? Not having any legal standing plus I do not like to be dishonorable, I did not take the poll. However, I would certainly vote Yes. My deepest respect to you for exposing this fraud of a person.

Henry Hawkins: might “Granny FireStoned” impart the same image with a couple of added twists? I still like Fauxahontas as the best descriptor of Warren.

The poll is open to anyone.

Take the fork out. She’s done.

If someone is giving any sort of legal advice, other than teaching, for remuneration then they are practicing law, and need to either have a license to practice law in the state, or be under the direct supervision of somebody that does. It doesn’t hinge on whether they go to court or not, or which court they are appearing in front of.

A barber or a hairdresser is expected to know that, but it’s too complicated for a Harvard law professor to figure out?

A commenter named “Dudu” on a thread about the Elizabeth Warren law license problem said yesterday, “I heard today From Howie Carr, He said the Herald is waiting for certain documents from The Bar Overseers, and they wont be able to get them before Tuesday.