Weinergate retrospective — the lying liars and their lies about Andrew Breitbart

Weinergate retrospective — the lying liars and their lies about Andrew Breitbart

The story really broke on the 28th, and my initial reaction was I’m not touching this one, although I did use it as an excuse to run this clip under the heading Please Brief Me:

The right-blogosphere led the way to debunking Weiner’s hacking claim: 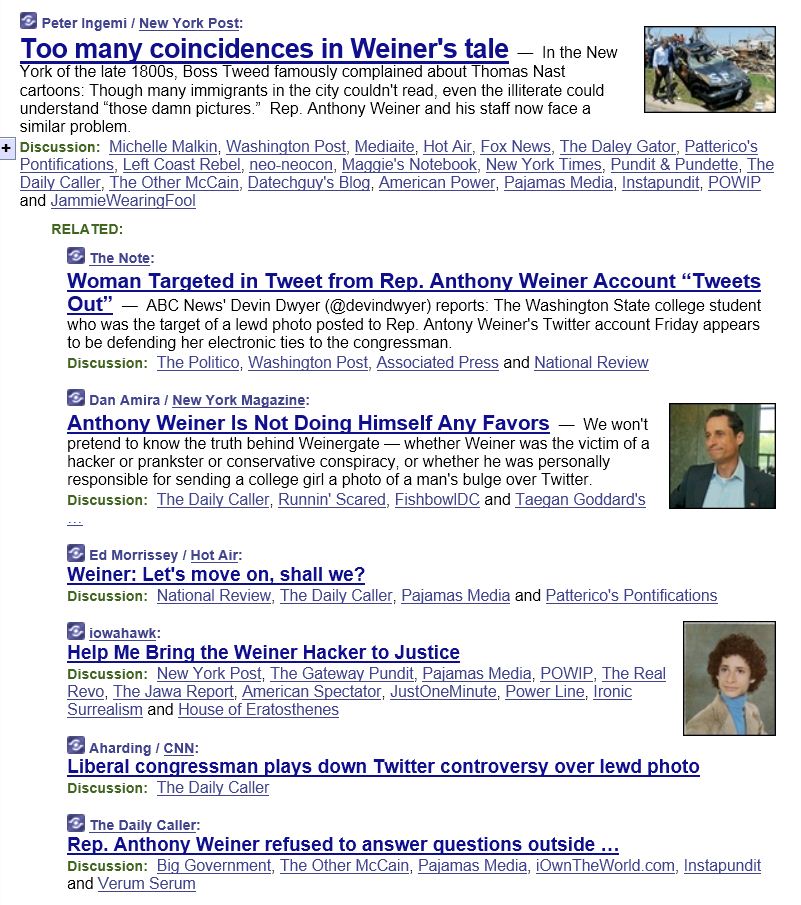 Those defending Weiner used it as an excuse to bash Andrew Breitbart and to claim Breitbart was behind it.  Joan Walsh, who now refers to those running Breitbart.com as the “spawn” of Breitbart, was one of the Weiner-truthers.  So was Charles Johnson, who refused to apologize even when the truth hit him in the face.

Early on, Legal Insurrection readers did not think Weiner would resign.

Debbie Wasserman Schultz let us know that it all was just a personal matter:

By June 6, it was clear that Weiner’s Going Down:

Just go to Breitbart’s Big Government [link now dead]  as the evidence of more photos is dribbled out today.  Patterico is all Weiner, all the time.  Stacy McCain hasn’t had so much fun since ever.  Ace is lunching at the buffet.

Even the Israel Lobby has turned on him.

Andrew Breitbart was proven right.  He brought down a flame-throwing Democrat the old fashioned way, with the truth.

Yet there were to be no apologies from those who attacked him, even though Weinergate: The Line For Apologies To Andrew Breitbart Forms On The Left: 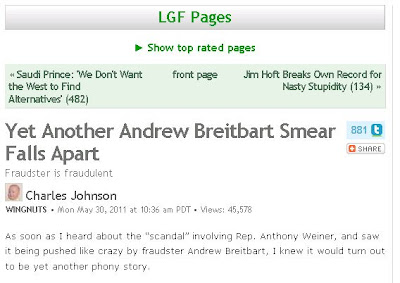 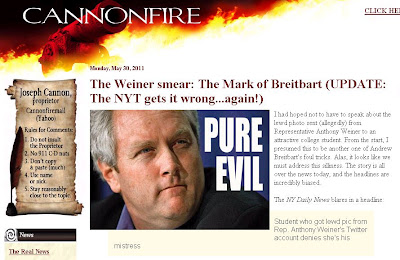 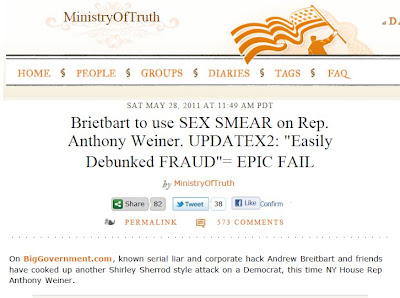 Eric Boehlert, who took time out from proofreading: 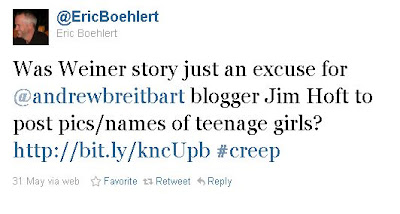 Was this Breitbart’s finest moment?

Weiner’s press conference at which he announced he was resigning was more like an acceptance speech.  The special election went to Republican Bob Turner, and later the District was carved up in redistricting.

Little is left of Anthony Weiner’s Weinergate except the Weiner Truthers, who remain convinced this was a Breitbart set up.

Somewhere Andrew is laughing his ass off.

Update:  Given Joan Walsh’s hatred of Breitbart’s “spawn,” its worth remembering that Walsh was one of the most vigorous and disparaging defenders of Weiner as documented in great detail by Liberty Chick at the time, Blame Breitbart!: Salon.com Editor Joan Walsh Lies and Bullies on Weinergate.

I read the “Weiner Truthers” story this morning.

I LOVE crazy people, don’t you? Such an interesting world!

I had to read the story, because the headline carried a lot of potential meanings…

Weiner apologized to Breitbart. This points to the extraordinary moral force that was Andrew Breitbart. It is also what galled the Left beyond the point of endurance.

Last year it was Weiner, this year it’s Warren. The level of ethical and moral corruption of our, primarily but not exclusively leftist, overlords just continues to befuddle me. It’s almost like some secret society where one has to have some perversion only known the society in order to enter.

On the other side is the tea party, which is libelled and slandered to an unbelievable degree – so unbelievable that it almost seems like “projection” on the part of the overlords.

It doesn’t say much for the future of this country.

I still can’t believe that Weiner was prone to “fits of stupidity” at the level required to exit public service, but the guy who helped coin the term “Tweeter malfunction” was more than up to the job of self-destructing.

That wasn’t a “fit of stupidity.” When you take away the digital aspect, Weiner was just the creepy guy in a trenchcoat flashing people.

It’s my understanding that Patrick and Ace’s coverage of Weinergate brought Brett Kimberlin and his posse out of the walls. Can anyone give me a back story on this?

Kimberlin is, IMO, clearly a Dem operative. His Dem connections need to be exposed for the world to see. What’s surfaced so far is only the tip of the iceberg.

Not intending to hijack this thread…just wondering what the connection was/is.

“By June 6, it was clear that Weiner’s Going Down:

Just go to Breitbart’s Big Government [link now dead] as the evidence of more photos is dribbled out today. Patterico is all Weiner, all the time. Stacy McCain hasn’t had so much fun since ever. Ace is lunching at the buffet.”

Aren’t these the same people Kimberlin targeted, and wasn’t it about a year ago that Kimberlin began targeting some of them?

There still are many in the ‘Liberal Press’ who beleive that Hiss was innocent.

Thanks so much for this reminder and compilation. Excellent to have this reference in once concise place.

There is no about what and why the radical liberals do wand say what they do and say.. They are in the wrong, so they have to lie about everything, and smear everyone to twist, distort, pervert, and poison the truth, and the public pereception of what the truth is. This they do by projection, the very same tactics Hitler used against the Jews in the 1920’s, 30’s, and 40’s.

They are not fooling anyone except their already indoctrinated useful idiots. Of course we must be constantly vigilant in exposing them and their lies for what and who they are, and thanks to people like Mr Jacobson and Andrew Breitbart’s Web Site and so on, we are..

Joan is just lonely & upset that Antony did not call -nor even sent a pic.

That Charles Johnson is still wiping his breakfast off of his face.

As someone who lives in Weiner’s district (until it was recently changed) and as someone with personal experience with Weiner’s duplicity, I must say this was the most satisfying week for me politically since the 7 days following W Bush’s re-election in 11/04. Weiner’s defenders are forever smeared as liars and operatives for Democratic special interests, which I think is the bigger legacy of this entire mess. We must never let them forget how they were outted as liars.

RIP Andrew, I almost had a spontaneous orgasm when you took control of that press conference.