I heard you just donated $1 million or so to Media Matters.  Demand a refund.  Their highest-paid Senior Fellow is spending his time checking my blog for spelling errors.  My readers already do that for me for free. 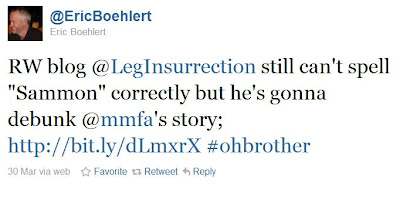 what a joke. it's what they always do when they can't defend the lies – they attack the messenger.

Still waiting for Media Matters to correct its incorrect claim that Glenn Beck has less than 400 affiliates. They claimed he lost 7 affiliates (correct), ignored the fact that he gained 88 (meaning they lied by omission), ignored the correction from Business Insider that he actually has more than 430 affiliates (meaning they had a factually inaccurate claim in their post), and pretended that nobody noticed they were factually inaccurate (typical of liars caught lying).

It's hard to know what they're being paid to do these days, unless making themselves look stupid is hot work

Spelling? Is that the best they've got? ROFL!

Notice Eric Boehlert chose to use the colloquial "gonna" instead of the more proper "going to" in his tweet. But why? Perverting the English language was unnecessary in this case. He clearly has excess characters to accomodate the more formal spelling of "going to", which would strengthen his image as the far superior intellect.

Instead, he chose to publicly embarrass his high brow, elitist, billionaire sugar daddy who he sponges off of by using a slang term that is often used by uneducated, knuckle-dragging Neanderthal hicks.

George must be disappointed that Senior Fellow Boehlert has tarnished the Media Matters brand with this decidedly low brow tweet and by setting such a low bar for the Junior Fellows to aspire to.

I can just picture Professor Jacobson holding an Ozcar at the Media Mutterers Awards, and, in his acceptance speech, Sally Fields' voice coming out as he says, "You spell check me! You really spellcheck me!"

Has anything Media Matters ever published mattered? How many leftist lies does one have to read before one realizes whatever they say is just leftist propaganda?

I think this is the "guerilla warfare and sabotage" squad they promised … it's called "Spelling Matters."

An especially vicious unit, they've been known to strike terror in the heart of Legal Insurrection, the ominous sound of approaching hooves punctuated by horrifying screams of,

"We're coming for you Jacobson!! You'd better dot your Ts and cross your eyes!!"

Media Matters: stupid is as stoopid does.