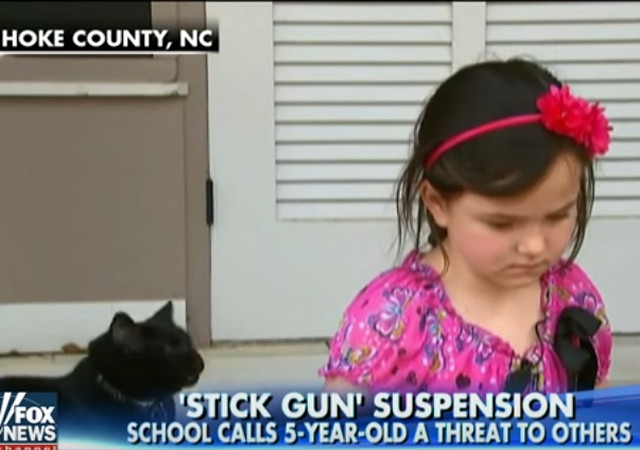 Posted by Mike LaChance on March 30, 2017 27 Comments
The country has changed. When I was growing up in the 1970's in Massachusetts, everyone in my neighborhood played with toy guns sometimes. If one of those wasn't available, a stick was the next best thing. Thanks to relatively new "zero tolerance policies" children can't even think of doing such things. A little girl in North Carolina just learned that lesson. The Blaze reports:

School suspends 5-year-old girl for ‘turning a stick into a gun’ Officials at a North Carolina school suspended a kindergarten student for playing with a “stick gun” on the playground. 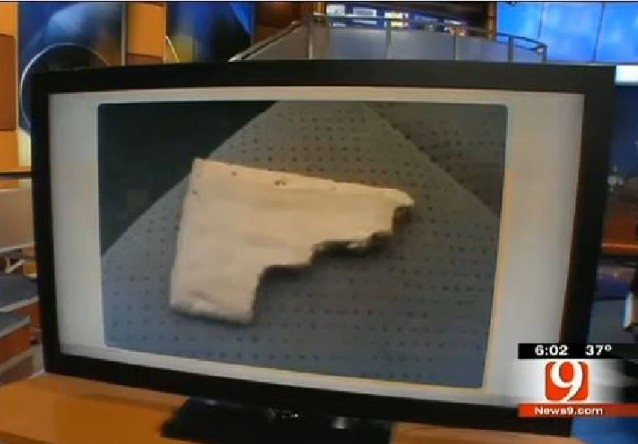 Posted by Mike LaChance on June 18, 2016 35 Comments
You may remember a story we wrote about back in 2013 which detailed the school suspension of a 7 year old boy for biting a Pop-Tart into the shape of a gun. We also covered his first appeal, which he lost. Now a judge has upheld the suspension. Reason reports:

Judge Upholds Suspension of the Pop-Tart Gun Kid Remember the Pop-Tart gun kid? He was 7 years old when he was suspended for chewing his breakfast (not actually a Pop-Tart, as it turned out) into the shape of a weapon and pretending to fire it at his classmates. Now he's 11, and Anne Arundel County Circuit Court Judge Ronald A. Silkworth just upheld his suspension. 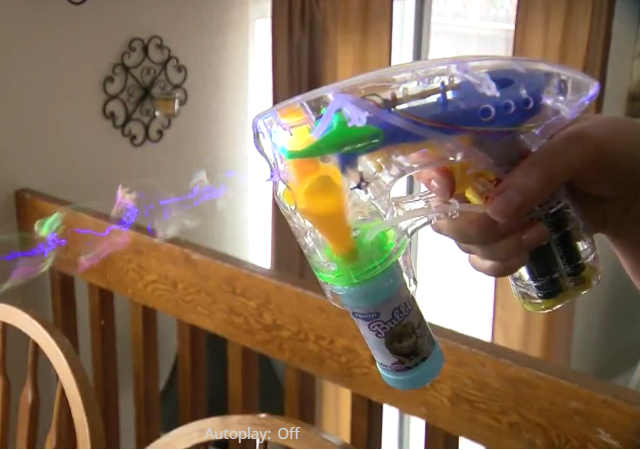 Posted by William A. Jacobson on May 18, 2016 37 Comments
We have seen this picture many times before. Zero tolerance insanity taking political correctness out on school children: The latest is from Brighton, Colorado, Kindergartner suspended for bringing bubble gun to class:
Read More 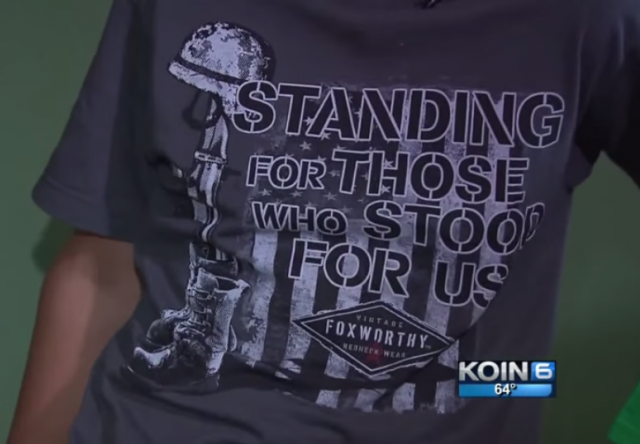 A local principal sent an 8th grade student home this week for wearing a shirt supporting U.S. troops. The problem, according to Gresham-Barlow School District [Oregon] officials, was that it had a gun on it. Now, many are speaking out against the principal’s decision to reprimand the student for something they consider a display of patriotism. “It means a lot to me because our family, we have a lot of people who were in the military,” middle schooler Alan Holmes said. “I didn’t see anything wrong with that shirt… It’s sad to see because it’s a fallen soldiers’ memorial.” But administrators at Dexter McCarthy Middle School didn’t see it that way. 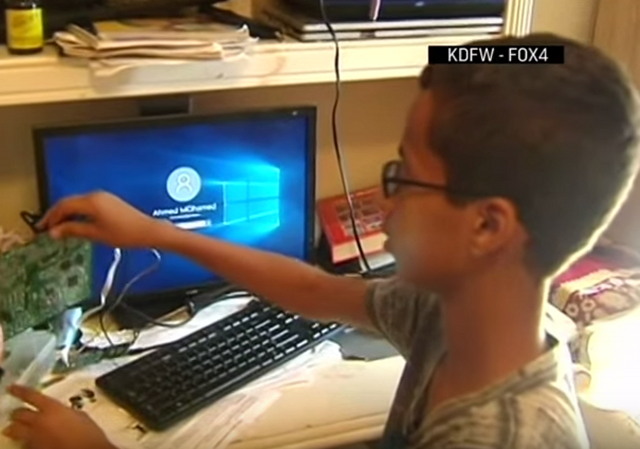 Posted by Mike LaChance on September 17, 2015 70 Comments
Yesterday a Texas teenager, who happens to be a Muslim, brought a homemade clock to school and was arrested because the clock was mistaken for a bomb. Some people are blaming racism but zero tolerance policies are the real problem. NBC News reports that he won't be charged:

No Charges For Ahmed Mohamed, Teen Arrested After Bringing Homemade Clock to School Police in Texas said Wednesday that charges will not be filed against a 14-year-old Muslim high school student who was arrested after he brought in a homemade clock that a teacher said looked like a bomb. The arrest drew an outcry on social media. Hundreds of thousands of people used the hashtag #IStandWithAhmed — and President Barack Obama invited the teen to the White House. Ahmed Mohamed, who is Sudanese-American, was arrested on Monday in the Dallas suburb of Irving after he took the clock to his high school. He told The Dallas Morning News that he had been in robotics club in middle school, and he wanted to show his new teacher what he could do. 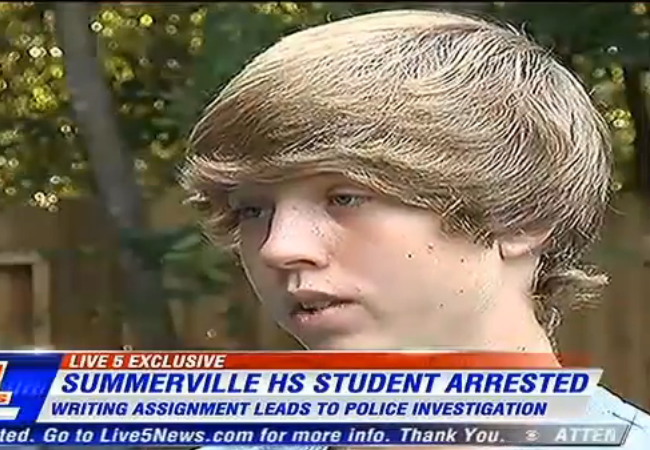 “This is a perfect example of ‘political correctness' that has exceeded the boundaries of common sense."... 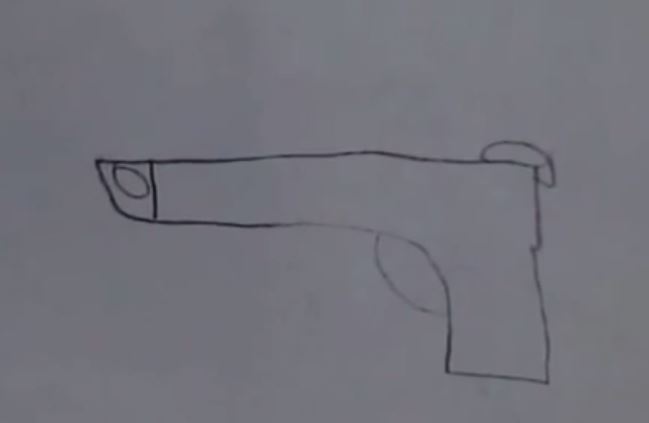 2nd grade boy investigated for drawing gun for class project as to what students saw in the clouds...

Then they came for the boys who twirl pencils... 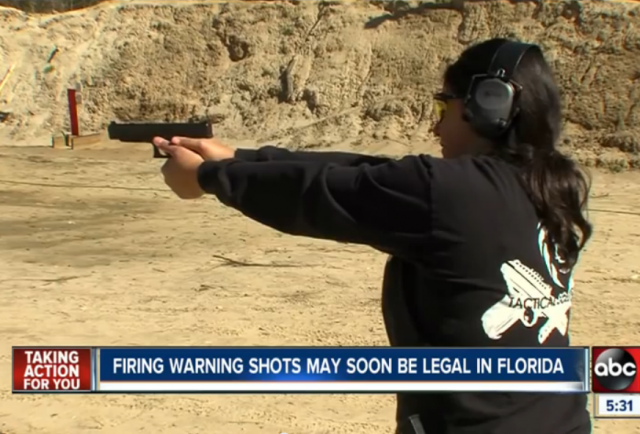 Posted by Andrew Branca on March 21, 2014 29 Comments
On Thursday, March 20, 2104, the Florida House of Representatives voted overwhelmingly (93-24) in approval of HB-89 (the so-called "warning shot" bill), and HB-7029 (the so-called "Pop-Tart" bill). These developments are reported in the Bradenton Herald, and other news sources (h/t to commenter pjm--thanks!). The Florida Senate has not yet taken a full vote on its parallel "warning shot" version of the House bill (SB-448), but their bill has easily passed their Criminal Justice committee (5-0), Judiciary committee (9-0), and Rules committee (12-1, and which made some modest changes to conform with the House bill).  The full state senate is scheduled to vote on SB-448 next Wednesday. We have previously covered this "warning shot" bill in some detail here Florida “Warning Shot” Bill Advances, as well as exploring how a "warning shot" had nothing whatever to do with the Marissa Alexander case (Angela Corey Reminds FL Legislators of Facts of Marissa Alexander Case and The Myth of Marissa Alexander’s “Warning Shot”) and fisking a hilariously error-filled post on the bill by Adam Weinstein over at Gawker (Gawker analyzes Florida’s “Warning Shot” bill, implosion follows). This local news story is a good example of how the media misunderstands and misreports the nature of the "warning shot" bill:
Read More 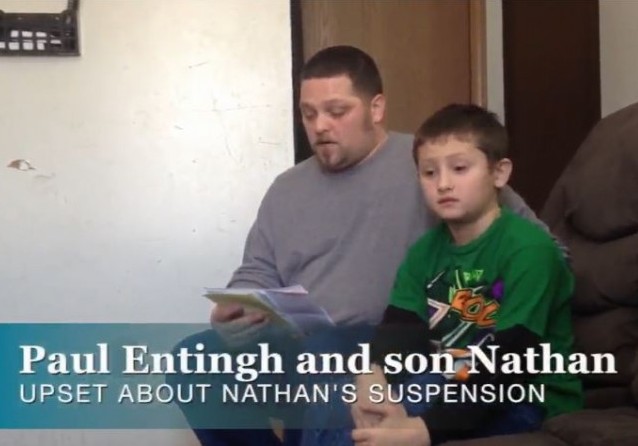 Here we go again: 10-year-old boy suspended for pointing finger like a gun

Posted by William A. Jacobson on March 04, 2014 38 Comments
We have witnessed a series of "zero tolerance" incidents in which school officials punish young children, usually boys, for using their imagination to play act guns: Here's another one, from The Columbus Dispatch:

A Columbus principal suspended a student for three days last week after the child pointed a “ lookalike firearm” at another student in class and pretended to shoot. The boy’s age? 10. The “level 2 lookalike firearm” cited in his suspension letter? His finger. “I was just playing around,” said Nathan Entingh, a fifth-grader at Devonshire Alternative Elementary School in a far northern section of the district. “People play around like this a lot at my school.” Other kids have been caught playing pretend gun games on the playground at Devonshire and weren’t suspended, Nathan said. Devonshire Principal Patricia Price has warned students about pretend gun play numerous times this year, and everyone should know the rules by now, district spokesman Jeff Warner said. Nathan put his finger to the side of the other student’s head and pretended to shoot “kind of execution style,” Warner said.

Posted by William A. Jacobson on January 27, 2014 17 Comments
A legislator in Oklahoma has proposed legislation to ease the "zero tolerance" school policies that have created absurdities in which young children with toy or imaginary guns are punished. We're seen so many of these instances: The legislator has an opponent, the Oklahoma Education Association, as explained in this report:

A proposed law that would ease school rules when it comes to fake weapons is causing a stir. It's called the "Common Sense Zero Tolerance Act" and the bill's author says it will protect children in school. "Real intent, real threats and real weapons should always be dealt with immediately. We need to stop criminalizing children's imagination and childhood play," explained Sally Kern, Republican from Oklahoma City. "If there's no real intent, there's no real threat, no real weapon, no real harm is occurring or going to occur, why in the world are we in a sense abusing our children like this." .... It also prevents schools from punishing students "using a finger or hand to simulate at weapon," "vocalizing imaginary firearms" or "drawing a picture of a firearm." But the Oklahoma Education Association isn't on board with Kern's proposed law.

When do we finally stop the harassment of little boys by school administrators?

Posted by William A. Jacobson on December 10, 2013 55 Comments
There war on little boys in elementary schools continues unabated. Little children are being punished with suspensions, expulsions, and permanent damage to school records based on standards of conduct carried into elementary schools from the adult world. Typically, but not exclusively, the insanity is directed at little boys for alleged violation of zero tolerance gun and sexual harassment policies. KRDO reports:

A Canon City school six-year-old boy has been accused of sexual harassment and the school suspended him for kissing a girl on the cheek and hand. A child psychologist said the tough treatment could have negative consequences. She said the kissing is normal behavior for children of that age. Lincoln School of Science and Technology is home to young growing minds from Kindergarten to 5th grade. Six-year-old Hunter Yelton is one of them suspended two days for kissing a girl once on the hand and another time on the cheek. Sandy Wurtele, a child clinical psychologist at UCCS, specializes in child sexual development and the prevention of childhood sexual abuse. She said she wasn't surprised when we told her about Hunter kissing a classmate. "For most six-year-old boys, absolutely. That would be a normal behavior,” said Wurtele. However, she was surprised to hear the school suspended him.

The Principal is defending the punishment:
Read More 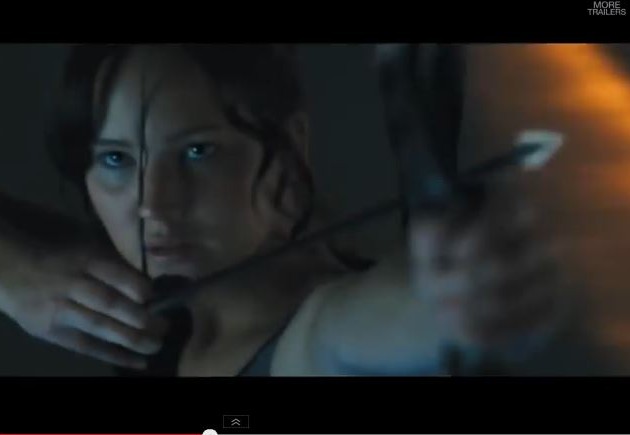 Posted by William A. Jacobson on December 07, 2013 42 Comments
We have highlighted here many times the almost insane “zero tolerance” policies at school wherein students are disciplined, suspended and expelled for biting a Pop Tart into the shape of a gun, bringing Quarter coin-sized gun keychain charms to school, and even pointing a pencil and saying “bang.” Now another case. A fifth grader is suspended and faces expulsion for shooting an imaginary bow and arrow at school mimicking The Hunger Games. Megyn Kelly reports (video at bottom of post):

A fifth grader in Georgia [note: original report has since been corrected to reflect Pennsylvania] has been suspended for shooting an imaginary arrow at a classmate. The 10-year-old also faces possible expulsion. The Rutherford Institute, which is defending Johnny Jones, says he was told he violated the school’s zero tolerance policy on weapons. They’re working to get the suspension reversed and lifted from his permanent record. On Friday night’s The Kelly File, defense attorney Jonna Spilbor reacted to the ordeal. “Here’s how ridiculous it is. If we’re going to punish this poor kid for pretending to shoot a bow and arrow, let’s ticket his parents for parking their unicorn in a fire zone.”

The school is defending its decision:
Read More 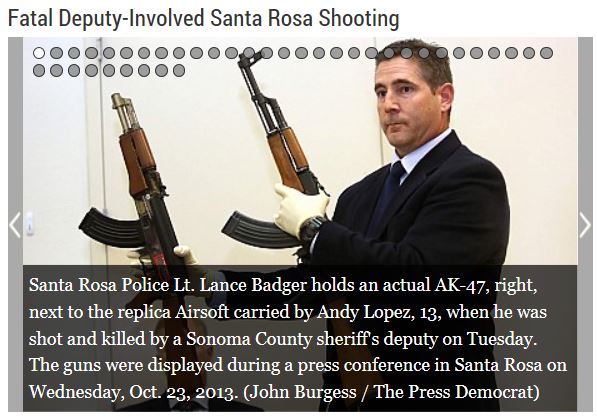 Posted by William A. Jacobson on October 24, 2013 59 Comments
We have highlighted here many times the almost insane "zero tolerance" policies at school wherein students are disciplined, suspended and expelled for biting a Pop Tart into the shape of a gun, bringing Quarter coin-sized gun keychain charms to school, and even pointing a pencil and saying "bang." And then there is this, a full-sized "toy" AK-47 which got a 13-year old shot by police, Authorities investigate fatal deputy-involving shooting of 13-year-old Santa Rosa boy:

Sonoma County sheriff's deputies shot and killed a 13-year-old boy Tuesday afternoon during an encounter in a southwest Santa Rosa neighborhood. The boy's father, Rodrigo Lopez, identified the teen as Andy Lopez and said he had been carrying a toy gun that belonged to a friend. Santa Rosa and Petaluma police detectives are investigating the shooting. Interviews were conducted throughout Tuesday night, Santa Rosa Lt. Paul Henry said Wednesday morning.... It was unclear Tuesday whether the rifle, which sheriff's officials characterized as a replica, was capable of firing BBs or other projectiles. 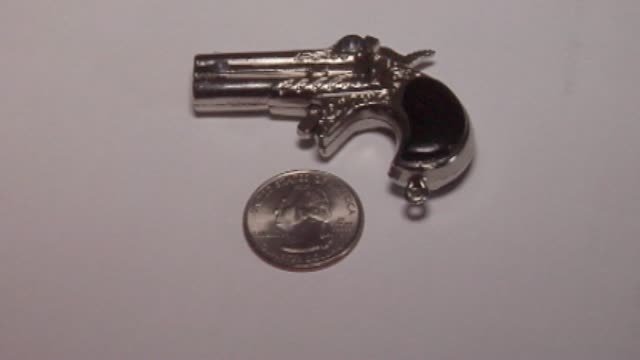 "Weapon" was barely the size of a Quarter....

All your front yards are belong to school zero-tolerance policies

It's not about safety, it's about control....

The zero-tolerance war on kindergarteners

Even talking about Bubble and Nerf guns gets punished....