You may remember the story of the 7-year old disciplined for biting his Pop Tart into the shape of a gun at school, Maryland school offers counseling for students troubled by “pastry gun” incident.

The evidence against the young lad was overwhelming and unimpeachable: 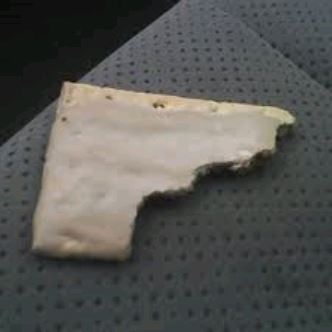 The young perp has lost his first round of appeal:

An appeal to have an eight year-old boy’s record expunged for a suspension he received for biting a Pop-Tart into the shape of a gun has been denied.

The attorney for Josh Welch, the boy who made national headlines after nibbling his pastry into a gun, said Monday that a top school official has denied an appeal to have the boy’s record expunged.

According to the Baltimore Sun, the family’s attorney, Robin Ficker, met with school officials last month, but no resolution was reached.

Ficker said the matter then went to the superintendent, Kevin Maxwell, whose office responded with a letter notifying the attorney that the appeal request had been denied.

But, Ficker isn’t giving up.

“I’ve spoken to Mr. Welch, and we’re definitely going to appeal to the board of education,” Ficker said.

While he’s fighting his appeals, at least he can enjoy his free lifetime NRA membership.

We will keep an eye on the legal developments of the Pop-Tart offender and his gang members, the young toughs who were caught in possession of pencil pointed like a gun, a Quarter-size Lego piece, a clear plastic toy gun, a Lego Gun, an empty cap gun, and a Nerf Gun, and who trashed talked other kids about a Bubble Gun and Nerf Gun.

Being an inmate of a public school…in Maryland…

thing looked more like a F117 stealth fighter to me

Finally the psychologist tells the guy that he thinks he is obsessed with sex. The guy replies, “Me? You’re the one with the dirty book.”

I see his own private Idaho.

‘Scuse my French BUT, You(maryland)have got to be f#&%ing kidding me! Let’s give that weird shaped state, back to the Brits. Who knows, if we sweeten the pot, toss in D.C. and Bidenland, Dullaware.

This has nothing to do with Zero Tolerance idiocy, nor with hysteria after the Sandy Hook shootings. It is not idiocy. It is deliberate. It is a tactic. Idiocy is just the smoke screen. This is a program to condition, to terrorize, to brainwash our children into fearing and hating guns, patriotism, and Americanism. If the Liberal scum can ruin our children, they have won.

You hit it on the head. This is an attempt to intimidate. There is nothing remotely threatening about a child creating a gun out of a pop-tart.

I say this from personal experience, maryland is a shithole. I took everything I wanted when I left.

Ever watch an early John Waters movie? That is Maryland. It is still the same shit hole it was in the sixties and seventies. Heck, it even looks the same (only grubbier).

Leave the Peoples Socialist Republic of Maryland and go to Texas where freedom still rings.

Remember all the fruits and nuts from CA and all the jobless high tax Democrat states are heading to CA. Next thing you know, they will be voting corrupt Democrat bastards into office and ruining a perfectly good state,

Ask yourself, why did this happen? The answer, of course, is that “they” could do it!

Unless, “they,” the super dooper elites, control everything and everyone, there might be chaos in the land or even worse, freedom and creativity, leading to different ways of doing things; can’t have that, now, can we!

Ah, better go now and finish cooking up the marvelous bef stew that’ll knock the socks off the busy bodies of the world; it’s tasty too.

Nice picture of a Pop-Tart in the shape of Idaho

. Besides that pop tarts are truly awful . We’re they not originally something one put in a toaster for breakfast. This one has icing.

Funny, I’m surprised the child wasn’t arrested for aggravated assault for bringing in a sugary substance to school.

The America that I once knew is long gone.

You young’ns gonna hafta take charge if you hope to have any sanity in your future.

I think that I’ll take a nap ’til tomorrow…

I think the young lad’s lawyer ought to do a discovery into Maxwell’s background. Money bet is tat e played cops and robbers as a young ‘un. Must have warped his brain a little too much.

Maxwell’s silver hammer came down on his head ,

Maxwell’s silver hammer made sure he was dead.

Seriously, leave it on his record, and get a copy of it, and publish it. Imagine being 20 years old and having that on your record! What a keepsake! In the meantime it could get a lot a mocking mileage that that school system desperately needs.

As long as we put up with this, we will get more.

The good people who are customers of this school district must demand that every school official and employee involved in this travesty be fired – immediately. If they do not do that, then they deserve this sort of treatment.

I’ve said it before – one good thing about living abroad in Korea… the toy shelves are full of pellet guns. My son has a 357, a 9mm Glock, and an M16A2 (which also fires automatic).

I appreciate that the NRA gave a lifetime membership to the young boy…. if they want to really influence parents, what they should start doing is giving these youngsters a $5,000 scholarship. Money has a way of influencing folks.

who do we contact to declare our outrage at this giant ball of stupid?

We don’t contact anybody, we teach our children the Constitution and the Bill of Rights. We help them to read the Declaration of Independence and the Federalist Papers. We talk to them about what it means to be American. We teach them how to think and to question everything. We counter program them before the Cmmunists get their hands on them.

Sure, make fun, call this a silly action by the schools, but apparently NONE OF YOU HAVE EVER BEEN SHOT BY A POP TART.

If I were a student, I’d be troubled by this incident. Troubled that the adults who are supposed to be teaching me are idiots who are out of touch with reality.

Let me add that this incident should go on the “permanent record” of every teacher & administrator involved in this.

That’s nine perps, so far. We almost have enough for a Ten Most Wanted poster by the PC Police.

I am so happy that I graduated when there was still some sanity in the public school education system. Now the brat’s clowns, idiots, and Marxists run these asylums and indoctrination is the only curriculum offered.