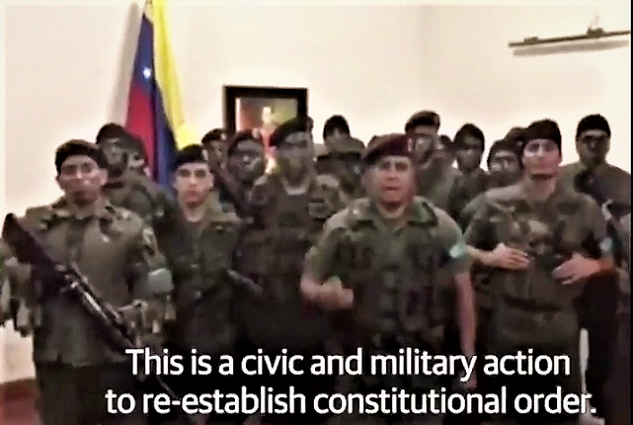 Posted by Fuzzy Slippers on August 06, 2017 8 Comments
Venezuela has been in a state of unrest and seemingly near collapse for years, and it's not clear how much longer Venezuelan president Nicolas Maduro can hang onto power.  Food, medicine, and toilet paper shortages resulting from Maduro's socialist policies have created unrest among many Venezuelans.  Anti-Maduro protests and the responses from the Maduro government have resulted in over 100 deaths. One small group of military men staged an uprising at a military base that was quickly quashed by Maduro loyalists.  The group's goal, they stated, was to "restore constitutional order." The Maduro government is calling the uprising a "terrorist attack."  Reports indicate that one person died, another was badly wounded, and seven were arrested.
Read More 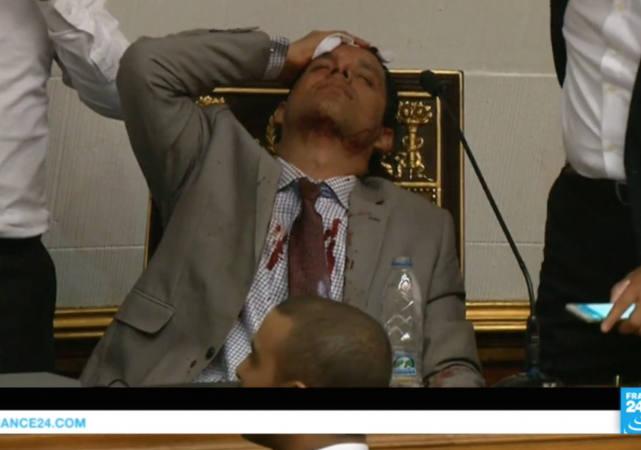 Posted by New Neo on July 06, 2017 7 Comments
There has been new rioting in Venezuela of an extremely disturbing sort:

A mob stormed Venezuela’s opposition-dominated National Assembly on Wednesday with the apparent acquiescence of government troops and carried out a startling attack on lawmakers and journalists. Bloodied lawmakers were treated for broken ribs and head injuries, and journalists said the attackers had stolen their equipment. The episode in Caracas, which coincided with Venezuela’s Independence Day, was a sharp escalation of lawlessness in a country roiled by a failing economy and daily street demonstrations. 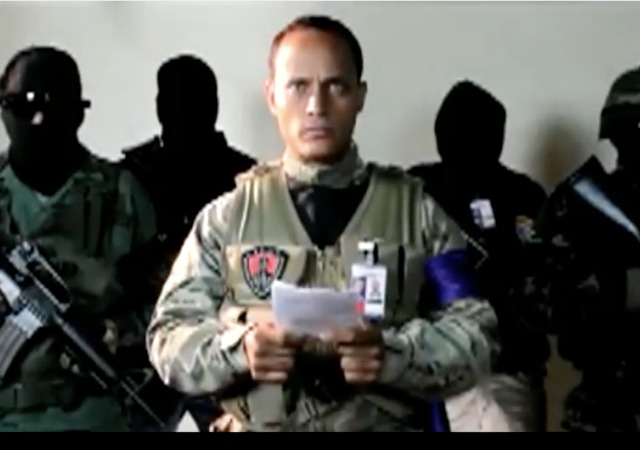 Posted by Mary Chastain on June 28, 2017 6 Comments
Social media took off late Tuesday night after video caught a helicopter circling Venezuelan government buildings, including the Supreme Court. Reports indicate that the helicopter "fired 15 shots at the Interior Ministry, where scores of people were at a social event, and dropped four grenades on the court, where judges were meeting." President Nicolas Maduro immediately slammed the attack, which he called a coup attempt. But other theories have come to light with the opposition saying Maduro staged the coup attempt as a way to crackdown on his opponents and grab more power.
Read More

Posted by Mary Chastain on June 05, 2017 10 Comments
Reuters has reported that President Donald Trump's administration has started to think about possible sanctions against Venezuela's lucrative oil sector. The sanctions would include PDVSA, the country's state oil company. Venezuela continues to see protests against socialist President Nicolás Maduro, but he keeps cracking down on the opposition to keep his power. His policies have decimated the oil rich country, which have left the people starving and without proper medical care. A strike to Venezuela's top economic source would surely decimate his administration. The country "relies on oil for some 95 percent of export revenues." This means the administration must proceed with caution.
Read More

Venezuela: Maduro Tells Trump To “get your pig hands out of here”

Posted by Mike LaChance on May 17, 2017 6 Comments
The situation in Venezuela has worsened in recent weeks. People are fighting in the streets with government forces and multiple people have died. Reuters reports:

Venezuela Death Toll Rises to at Least 42 The death toll in Venezuela's six-week wave of anti-government unrest has risen to at least 42, according to the state prosecutor's office, which announced three deaths on Tuesday.

Venezuela: Son of Pro-Maduro Official Pleads with His Father to “Stop the Injustice”

"Dad, in this moment you have the power to end the injustice that has sunk this country"... 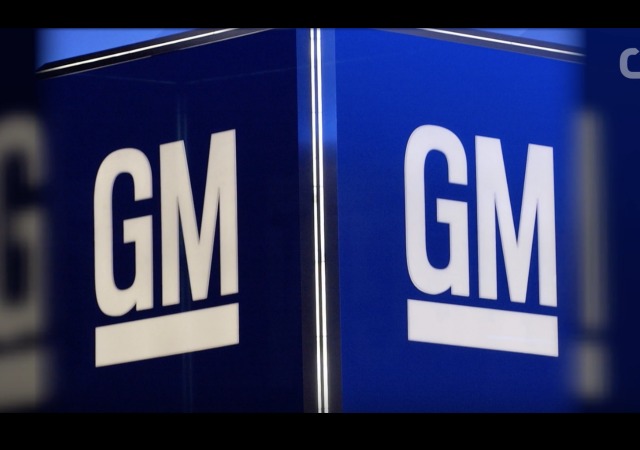 Posted by Mary Chastain on April 21, 2017 20 Comments
General Motors has closed down its Venezuela plant after the socialist country seized the plant on Wednesday. Officials swiped the company's "production facilities and car stock," which forced GM to lay off 2,700 workers. The closure comes only a day after Venezuela erupted in more protests that have left at least three dead. President Nicolas Maduro's policies have left people jobless and without food. Bloomberg reported:

GM’s factory was “unexpectedly taken by the public authorities, preventing normal operations,” according to an emailed statement. The Detroit-based automaker said it “strongly rejects the arbitrary measures taken by the authorities and will vigorously take all legal actions, within and outside of Venezuela, to defend its rights.” 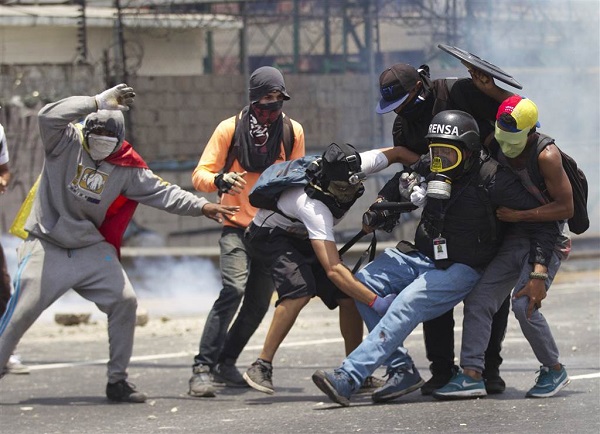 "In every corner of Venezuela, this socialist project has failed."...

Opposition (correctly) noted that Maduro has become a dictator... 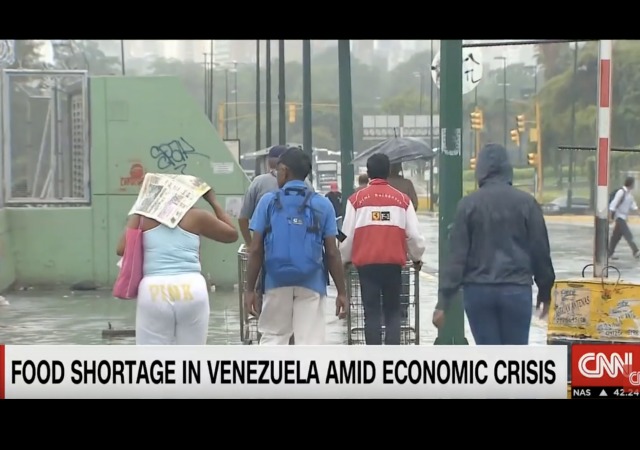 In 2015, Venezuela became one of the top 10 countries whose citizens overstayed their visas...

Stealing toys from the "rich" to give to the poor...

"Desperate Venezuelans are streaming across the Amazon Basin"...

Posted by Fuzzy Slippers on October 15, 2016 8 Comments
The economic crisis in Venezuela canaptly be described as a centralized control crisis, a crisis socialist and communist states know and for some reason insist on repeating.  Over and over.  We've seen the reports on shortages ranging from toilet paper to food, and rather than risk a revolution that would topple government, the Venezuelan government has decided that it will ease up on price controls on food and other essentials (like toilet paper). NPR, in October of last year, wrote about the problems with Venezuela's price controls and the firm grip the government had its citizens access to food.

For Caracas housewife Anny Valero, today is grocery day — whether she likes it or not. Here's why: It's Monday, and if Valero doesn't go now, she'll have to wait four more days to buy food. In Venezuela, government supermarkets sell price-controlled food, making them far cheaper than private stores. But Valero explains that people are allowed in state-run supermarkets just two days per week, based on their ID card numbers. The system is designed to prevent shoppers from buying more than they need and then reselling goods on the black market at a huge markup. 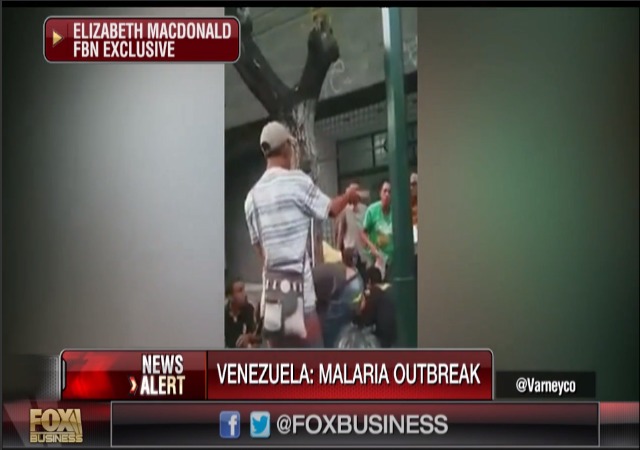 Posted by Mary Chastain on August 17, 2016 5 Comments
Not only has Venezuelan President Nicolas Madura's socialist policies starved people to death, but he has also brought back malaria. The New York Times has reported that desperate times have forced people to seek out gold in watery mines infested with mosquitos, which has led to the malaria resurgence because socialism ruined the economy and the country lacks medicine.
Read More 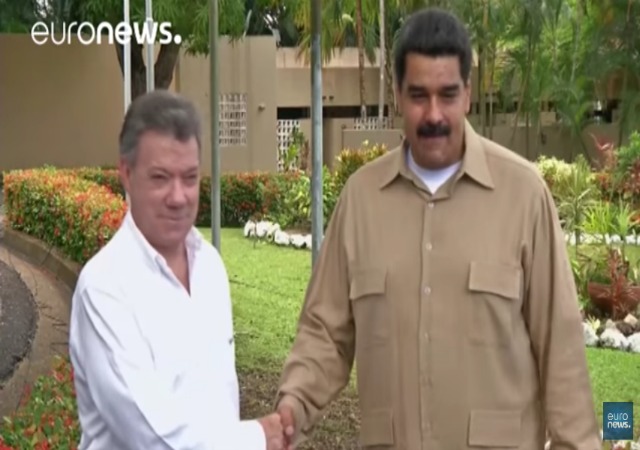 Posted by Mary Chastain on August 12, 2016 8 Comments
The Colombian and Venezuelan governments have agreed to partially open their border as Venezuelans need food and basic goods for survival. Venezuelan President Nicolas Maduro closed the border last year to prevent smuggling, but with his people literally starving to death due to his socialist policies, he had to change course.
Read More
DONATE