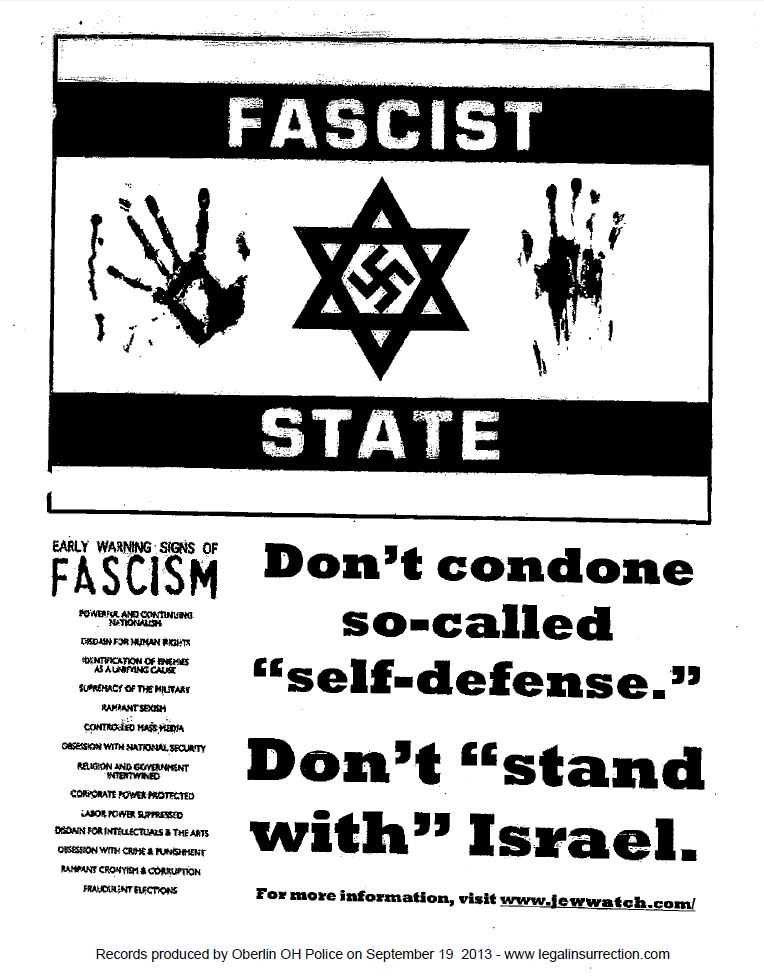 Posted by William A. Jacobson on September 20, 2013 8 Comments
Yesterday we posted examples of the racist and other posters placed around the Oberlin campus last February as part of The Great Oberlin College Racism Hoax of 2013.  There are many more in the Oberlin police department document production we did not post. On no campus in the United States or elsewhere would the racist posters using the "N" word and so on be acceptable public discourse (even if it is an interesting free speech legal issue). But what about the anti-Israel poster?

Unfortunately, such discourse on campuses and elsewhere is par for the course in the anti-Israel movement.  The attempt to single out Israel alone for boycott, and the false equation of Israel with Apartheid, fascism and Nazism, is part of the dialogue and accepted.  Oberlin is one of only a handful of higher education campuses where the student government has endorsed the anti-Israel BDS movement and boycott.  https://twitter.com/SJPNational/status/331473633899864064 In fact, Oberlin has one of the most active anti-Israel movements which spreads historically inaccurate falsehoods about the "occupation" and Israeli "Apartheid" policies: I have to wonder, if only the anti-Israel posters were put up around Oberlin not accompanied by attacks on blacks, Muslims and gays, would anyone have noticed or cared?  Would the campus have erupted in protest? Somehow I doubt it. The specific flag used on the Oberlin poster is akin to a stock image in anti-Israel protests, this one in San Francisco:
Read More

No apologies from this corner of "the blogosphere" for seeking the truth....

On Friday we asked:  Which was worse: Middlebury 9/11 flag-grabbing or Oberlin racism hoax? It arose from the actions of Anna Shireman-Grabowski, a Middlebury student, who felt compelled to destroy a 9/11 memorial on campus by trashing thousands of small American flags, each one representing a...

What we have here is a failure to understand. They don't understand what they're doing wrong: Only 16% of the 420K students in the CA State University system graduate within 4 years Catholic college hosts sex workshop featuring “c**t” coloring book DOE and DOJ threaten free speech by stalling... 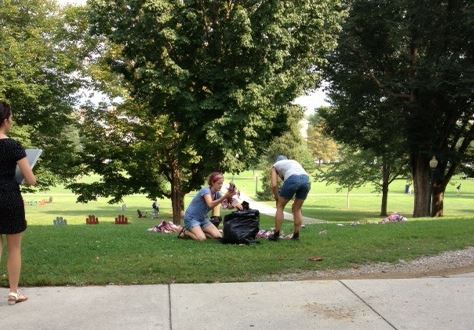 In this installment of the Research 101 Series, I cover advanced search syntax. Sometimes in your research using standard search engines like Google and Bing, you’ll find that just typing in a bunch of keywords doesn’t quite deliver the results you’re looking for.  Search engines index...

“Conservatives on Campus shall overcome” Week at College Insurrection

Double-secret townie No Trespass list finally coming to an end...

In response to my post last night, Oberlin racism hoax exploited to advance “even more extreme policies,” an Oberlin Alum writes: I am an Oberlin College graduate in Chemistry...

“Just like he saved Detroit” Week at College Insurrection

Posted by William A. Jacobson on August 31, 2013 5 Comments
Obama wants to fix the Higher Education Bubble. You're not done saving Detroit, please leave us alone: I've got it: If we have too many lawyers already, let's figure out a way to churn them out faster at lower cost so more people apply which increases the oversupply.  It worked so well with the housing market: Actually, I have a better idea.  Let's reduce presidential terms to two years instead of four, retroactively, so Presidents can make it to the lecture circuit without running up as much national debt. Please tell me "Yes he can" ... ah, that feels better: Now we juxtapose: Language Warning
Read More

However, the two students who perpetrated the racist acts later claimed that it was a "joke" in order to "troll" the campus, according to the police report.  Notably, the lead perpetrator was a liberal student with a history of Obama activism in high school and college.

Below, check out these hilarious 15 liberals who just can't handle the truth!

And yet on Twitter, the student described himself as an “atheist/pacifist/environmentalist/libertarian socialist/consequentialist.” Hmm, something just doesn't add up here….

Was running for President of the school when he pulled this hoax....

On Saturday we posted the statement issued by the Oberlin College administration in response to conservative media having exposed the racism hoax and Oberlin's part in playing along by not disclosing the hoax to the student body.  The sentence most of us focused on was: "These actions...

Oberlin hoax lesson: Smelling a rat is good, smelling like a rat is bad

I smelled a rat in the Oberlin racism narrative, and so did some other people in the conservative blogosphere, including but not limited to Michelle Malkin and Chuck Ross of The Daily Caller (who obtained the police report that confirmed our suspicions that this was...

Posted by William A. Jacobson on August 24, 2013 15 Comments
As longtime readers know, we're not big fans of the White Privilege verbiage, or the White Privilege consultant and pontificating class: In an otherwise good article about the Oberlin racism hoax, Conor Friedersdorf uses the term "white privilege" to describe the actions of the perpetrators: 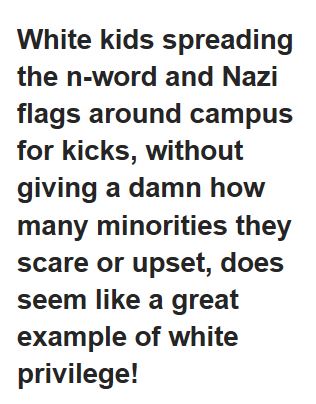 The problem is that the analysis and the entire post left something out, these were white liberal kids trying to make a liberal talking point come to life in a performance-art style endeavor: https://twitter.com/LegInsurrection/status/370929969913806849 Those white liberal college students had a privilege above and beyond mere ordinary whites. That extra-special privilege was to have the mainstream media largely ignore that the performance-art inspired racial narrative which covered the news cycle in March 2013 was a hoax.  Only the conservative media seems to care. I have written to just about everyone I could find at an MSM or left-wing website who ran with the Oberlin racism narrative back in March, and almost no one has updated their stories. I emailed reporters and/or editors at The NY Times, The Boston Globe, The Cleveland Plain Dealer, Slate.com, Huffington Post, and CNN, among others. Here's a typical email, which I sent to Slate.com:

Here's another one, sent to the "scoop" line at HuffPo:

Huffington Post ran numerous stories in various sections about racial incidents on Oberlin College's campus in March 2013. It turns out those were hoaxes perpetrated by progressive pro-Obama activists in order to get a reaction, http://t.co/BAACsOTX0g. Will you report the hoax and correct prior stories?

You covered this story last March, Photos of Oberlin College Students Rallying Against Hate Incidents. Turns out it was a hoax. Thought you'd want to know, since NYT may want to follow up now that the story has changed.

"Real" but part of a "hoax" about which Oberlin never told students....