"best addressed at the state, local and family levels”...

U. Kentucky Prof Calls Betsy DeVos a Powerful Handmaiden to the Patriarchy

“A powerful handmaiden to a hegemonic white supremacist"...

Posted by Mary Chastain on July 06, 2017 15 Comments
Attorney generals in eighteen states and Washington, D.C., filed a lawsuit against Secretary of Education Betsy DeVos over the delay of implementing regulations sculpted to protect any federal student loan borrowers defrauded by for-profit colleges. The attorney generals state that DeVos has illegaly delayed these regulations, which should have gone into affect on July 1. From Politico:

The rules, known as “borrower defense to repayment,” sought to make it easier for defrauded student loan borrowers to seek debt forgiveness. They also prohibit colleges from requiring students to resolve complaints against their school through arbitration rather than in court.

Posted by Mike LaChance on June 18, 2017 18 Comments
If you're wondering why President Trump's Secretary of Education Betsy DeVos needs millions of dollars in security, this is one of the reasons. DeVos is trying to make improvements in her department but is being predictably cast as someone who doesn't care about civil rights. Erica L. Green writes at the New York Times:

Education Dept. Says It Will Scale Back Civil Rights Investigations The Department of Education is scaling back investigations into civil rights violations at the nation’s public schools and universities, easing off mandates imposed by the Obama administration that the new leadership says have bogged down the agency.

Posted by Mike LaChance on June 15, 2017 12 Comments
Last night, Professor Jacobson pointed out that the shooting in Virginia yesterday has been in the works for a long time. Our political climate is like a powder keg and people on the left have been whipped up into a frenzy. That might explain why Trump's Secretary of Education Betsy DeVos requires so much security. When was the last time that a person in this role required such protection? Do people on the left who despise DeVos even know who was Education Secretary under Obama? Emma Brown and Devlin Barrett reported at the Washington Post in April: 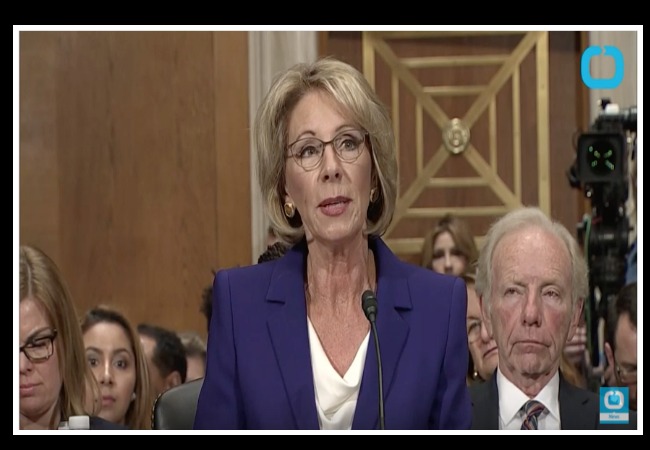 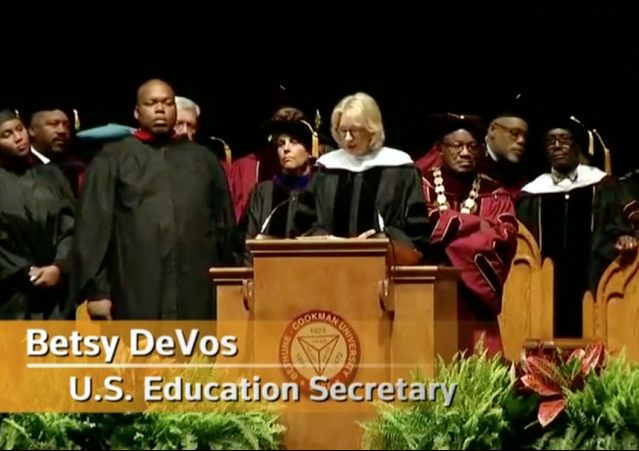 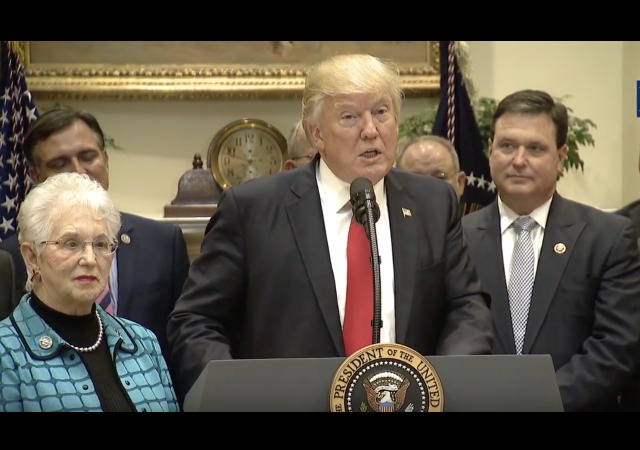 Posted by Mary Chastain on April 27, 2017 12 Comments
President Trump has signed an executive order to give Secretary of Education Betsy DeVos permission to start the process of moving education back to the local level. The New York Times reported:

The order requires Betsy DeVos, Mr. Trump’s education secretary, to review, modify and possibly repeal any regulations and guidelines that are not consistent with federal law. 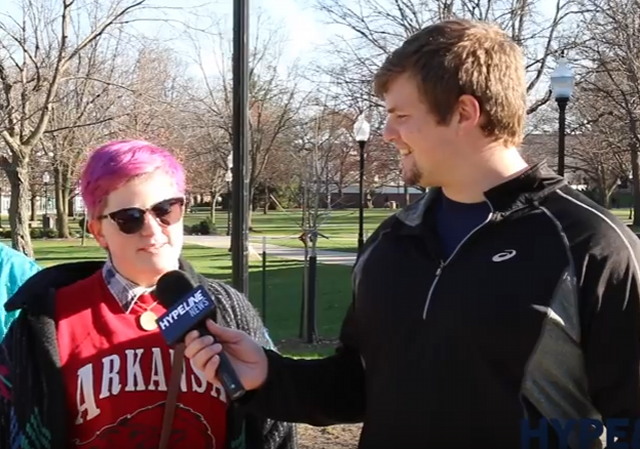 Posted by Mike LaChance on March 15, 2017 10 Comments
In the video below, college students are asked for their thoughts on President Trump's Education Secretary Betsy DeVos. Their responses sound like they came right off a Democratic Party memo: "DeVos isn't qualified for the position!" and "Anyone but her would have been a better choice!" and "She doesn't know what she's talking about!" Then the interviewer asks the same students for their thoughts on policies like school choice and vouchers for low income families - policies embraced by DeVos - and the students agree with them.
Read More 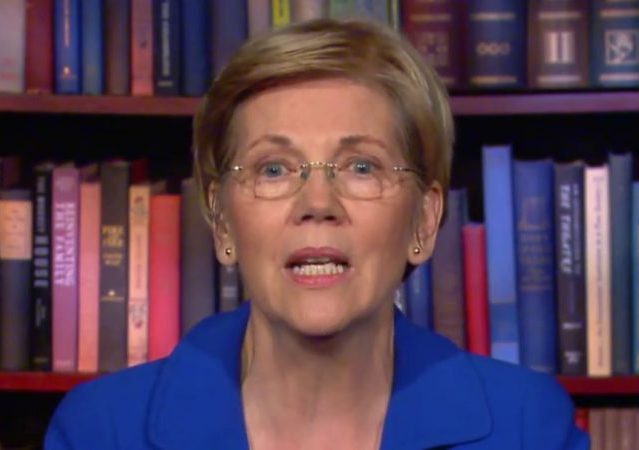 Posted by Kemberlee Kaye on February 10, 2017 18 Comments
Once upon a time, a certain Senator from Massachusetts wrote about the virtues of school voucher programs. But you'd never know that based on how Sen. Warren criticized newly minted Education Secretary, Betsy DeVos. Writing to Secretary DeVos upon her nomination, Sen. Warren wrote:

"For decades, you have been one of the nation's strongest advocates for radically transforming the public education system through the use of taxpayer-funded vouchers that steer public dollars away from traditional public schools to private and religious schools. ... "But the actual evidence on how private voucher programs affect educational outcomes is mixed at best, in many cases reveals these programs to be expensive and dangerous failures that cost taxpayers billions of dollars while destroying public education systems." 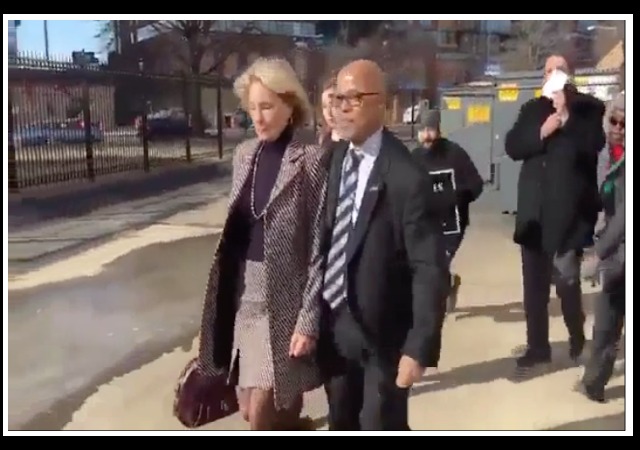 Posted by Mary Chastain on February 10, 2017 34 Comments
Secretary of Education Betsy DeVos could not enter Jefferson Academy in Washington, D.C., on Friday due to angry protesters. From Mediaite: 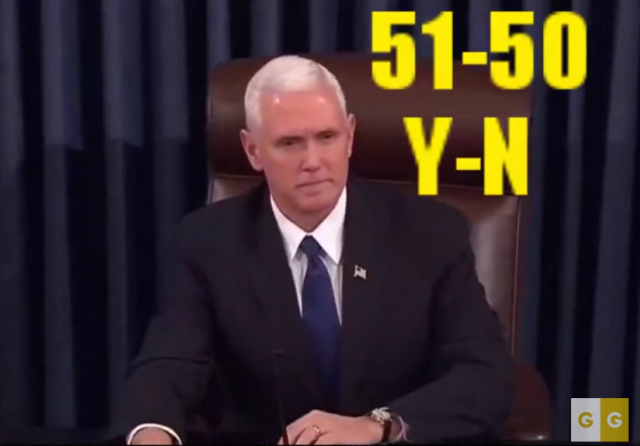 Posted by Mary Chastain on February 07, 2017 35 Comments
The Senate has confirmed Betsy DeVos as Secretary of Education after Vice President Mike Pence cast his tie-breaking vote for her. DeVos became the most contested nominee for a Cabinet position for President Donald Trump. https://twitter.com/cspan/status/829021954489384960
Read More
DONATE