Records obtained by Legal Insurrection Foundation reveal that when Bessinger was involuntarily transferred to Classical High in late August 2022, after her middle school whistleblowing retaliation, an influential teacher already was organizing against her based on Bessinger’s viewpoints. 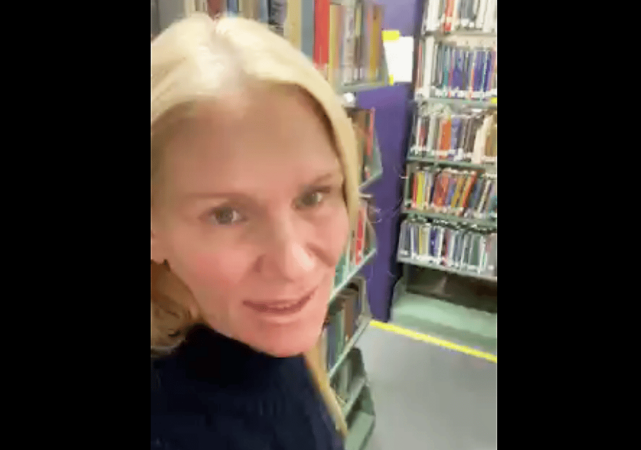 The Providence Public School District has been in the news recently due to its racially discriminatory conduct against white teachers, which has been challenged by Legal Insurrection Foundation:

Before that, we spotlighted Providence (RI) teacher Ramona Bessinger. Our most recent post on October 8, 2022, gives the history of Bessinger’s struggles ever since she blew the whistle in a post at Legal Insurrection about the corrupting influences of a new radicalized and racialized curriculum at her middle school, Providence (RI) Schools Bow To Radical Mob, Remove Whistleblower Ramona Bessinger From Teaching Position.

Here’s a brief excerpt for those of you who are not familiar with Bessinger:

…We have covered Bessinger’s story from inception. In July 2021, then a middle school teacher, Bessinger blew the whistle at Legal Insurrection on a new radicalized and racialized curriculum that was creating racial tension in school, including turning students and staff against her because she is white….

After that publicity, Bessinger suffered retaliation, including physical intimidation. Rather than stand up for Bessinger’s rights, Providence Schools involuntary transferred her from middle school to Classical High School, where she sat in a windowless basement for almost a year before finally getting a classroom teaching position after filing a formal grievance. Providence Schools was unwilling to prove its case at a grievance hearing, so it agreed to reinstate Bessinger to a classroom position not long before the hearing was to take place. Bessinger was represented by a union lawyer and also by James Peterson, Esq., of Judicial Watch.

Being back in the classroom, Bessinger declared victory, believing her ordeal finally was over and she could get back to doing what she loved and had been doing for over 20 years, teaching ….

Hope was given a chance.

The Wall Street Journal noted on July 25, 2022, A Teacher Triumphs Over the Woke Educational Establishment ….

… just about a month after resuming her classroom teaching, the mob was after Bessinger again. We chronicled how in Whistleblower Providence (RI) Teacher Ramona Bessinger Under Attack Again, Teachers Helping Organize Student Protest Against Her …

The protest took place with about 40-50 students in attendance according to a person I spoke with who was there, confirmed by the photos of the event. A left-wing website called “UpriseRI” published photos of the students at the protest and the name of a student who wrote a post for the website attacking Bessinger, and claimed “over 130” students joined the walk out.

We covered the protest in our post, Judicial Watch Demands Providence (RI) Schools Cease and Desist “Retaliation and Harassment” Of Ramona Bessinger ….

Then things went from worse, to even more worse. Bessinger was Threatened At School By Student Protest Leader ….

In a letter dated October 7 but received by Bessinger today (October 8), the Providence Schools informed Bessinger she was being put on administrative leave with pay, was barred from any interaction with staff, students, or parents, and was under “internal investigation” …

Since then, Legal Insurrection Foundation obtained over 175 pages of documents from the Providence School District pursuant to a public records request. Most of the records are unsurprising – in the handful of days leading up to being relieved of her teaching duties in the midst of the student protest, several community activists (and a professor at Clark University) as well as a very small number of parents of trans students complained that Bessinger’s publicly expressed viewpoints warranted her removal from her position at Classical High. While most of the documents are unsurprising and uninteresting, there is an important document that predated Bessinger even arriving at Classical High.

On August 3, 2022, an English Teacher at Classical High started organizing in anticipation of Bessinger’s arrival at the school.

I am an English teacher at our school. Just heard that Ramona Bessinger, an alt right mouthpiece for barely coded racist, homophobic and transphobic filth, will be teaching 9th and 12th graders at our school this fall. [redacted] his classmates could end up in her classroom makes me … well it brings up a lot of negative feelings. I wonder if a parent group could make a little noise around this issue.

Thanks
Let me know

The teacher’s name is disclosed in the production, but for the moment I’m not naming her. The teacher used her Providence Schools account to send the email, which is why it showed up in a public records request production. But she sent it to someone who was not in the system but active in a parents group, as well as copying herself at what appears to be a non-Providence Schools email. So whatever happened after that would not be part of the public records production.

That teacher was one of the several teachers Bessinger, the records reveal, accused of assisting or encouraging (in some unspecified way) the student protesters. Those teachers, the records reveal, denied it to the administration. On October 6, 2022,  the day before Bessinger was removed, the teachers, including the teacher who organized against Bessinger before she even arrived at the school, filed an internal complaint against Bessinger, saying her reporting the teachers’ names to the principal was “bullying and harassment.”

As of now, Bessinger appears to still be employed, though on paid leave. How long that will last is unclear.

What is clear is that when Bessinger was involuntarily transferred to Classical High, after her middle school whistleblowing retaliation, she walked into a situation where an influential teacher already was organizing against her based on Bessinger’s viewpoints.

Stunning key frame on that video.
What a face of hate.

Not a lot of “Live and Let Live” that I can see. But I’m old and my eyes don’t work like they once did

A quota-hire not liking what she is hearing.

And the only one in a sea of spoiled white leftists….

2. The parents of children at the “Classical High” should be informed of this so that they can remove their children. If they don’t, that’s on them.

This is a brave woman.

And we all owe her a debt of gratitude

At some point, she needs to accept reality and move on

I’m not a lawyer but it seems to me this situation is a lot like jury nullification. Or mob rule, anyway. Either way, the people in authority are allowing it to happen.

“Or start her own school”.

My third grade teacher was one of about three I ever had who could really be called teachers.

A combination of another teacher calling her a communist and trying to get her fired, combined with the school district’s ever-increasing requirements for nonsense rules, paperwork, and reducing teacher discretion led her to form of a school of her own.

If I( recall the name right, it was The Linfield School for Exceptional Children. This was before the term meant retarded. In her schoool, you had CHILDREN who left Linfield, rode to UCLA or some other college, and took a course or two before going home.

Mrs. Alexander, I will never forget you.

I believe it is a tort, so a credit check should be done on key players, if they have assets sue them personally. It is crucial that people have to pay personally.

Every one of the teachers involved in the incitement and bullying of Bessinger need to be fired NOW.

The school board who failed to protect her needs to be removed and the district find a fuckload for harassment!!

Every student who protested must be made to apologise for their harassment and bullying and the parents who agitated to attack this women must be dealt with by the police.

That’s what eoii you of he called, at the least, a start! 🤬🤬

…Thats what you would call, at least, a start! blaaaardy fat fingers and small keyboards!!

I have the same problem, fat fingers and carpel tunnel. Getting old is a bitch, but better than pushing up daisies.

This is the progressive mob at work

Ramona Bessinger is a true patriot whose only wish is to practice her profession, a time honored profession, and that’s to education children. Teaching is about opening the minds of students so they may absorb information and materials.

When healthy classroom discourse is replaced with ideologies then students become triggered in to activism.

Twenty-two with a spotless teaching record and because she doesn’t want to become a social justice organizer, Providence schools (and the Providence Teachers Union) want to put her head on a post in a corn field.

Correction: should be “twenty two years”.

Maybe she should seek employment at Hilldale?

These progressive clowns seem to want a “Back in the USSR” education world.

Many years ago I remember an asian DR telling a patient I worked with, only two things can happen , things get better or things get worse.
Teachers are in great demand today. Maybe teaching where she’s appreciated would be to her benefit. Public schools are in decline and the unions will go down with them.

Yes, there’s slander/libel here that should be addressed.
There’s also civil rights violations with the retaliation (and with the original action).

Remember, folks, this stuff is a religious test required of public employees. TREAT IT AS SUCH.

“At some point, she needs to accept reality and move on

Nice that you want her to make changes to live out her own principles while “accepting reality”. By the way, are you going to support her in her new life? Because I don’t get the impression she is independently wealthy.
—Rather, I think she should sue the Providence School District within an inch of their lives!

I can only stand in awe of this brave woman.
We are done as a free country with every public school is teaching Marxism

Meanwhile, back a the ranch, leftist teachers are allowed to festoon their classrooms with tranny paraphernalia and BLM posters.

I would hope some of the teachers on the sidelines of this fight would step up. You think by staying quiet, these bullies will leave you alone.

Once they defeat the fighter, beating up the rest of you is a piece of cake.