Providence Teacher Ramona Bessinger on Sky News Australia: “it’s going to feed the sort of anger and the racial division that is already coming to a boiling point and it’s going to make us all quite frankly, very unsafe.” 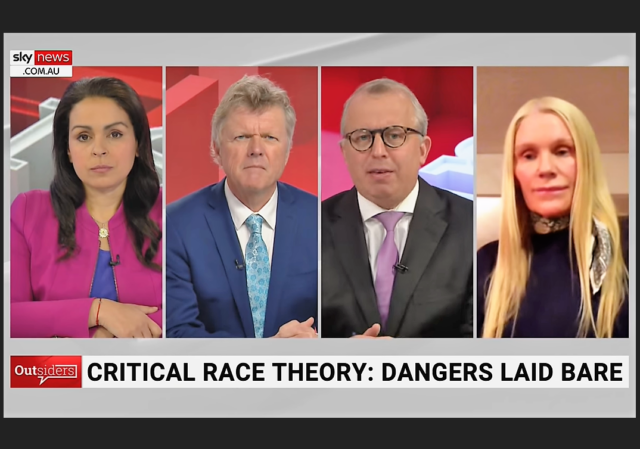 Ramona Bessinger is the Providence, Rhode Island, middle school teacher who blew the whistle on July 13, 2021, in a post at Legal Insurrection on pernicious and destructive implementation of a new race-oriented curriculum, I’m A Middle School Teacher And See How Critical Race Curriculum Is Creating Racial Hostility In School:

This past 2020/21 school year was a sad and worrisome turning point for me as an educator. Providence K-8 teachers were introduced to one of the most racially divisive, hateful, and in large part, historically inaccurate curriculums I have ever seen in my teaching career.

Yes, I am speaking about the controversial critical race theory that has infiltrated our public schools here in Rhode Island under the umbrella of Cuturally Responsive learning and teaching, which includes a focus on identities. You won’t see the words “critical race theory” on the materials, but those are the concepts taught. The new, racialized curriculum and materials focuses almost exclusively on an oppressor-oppressed narrative, and have created racial tensions among students and staff where none existed before….

Bessinger’s story has spread nationally and locally, including in The Wall Street Journal, The Washington Examiner, FoxNews.com, Breitbart,  The Jewish Voice, The John DePetro Show, The Matt Allen Show, In The Dugout, Fox and Friends, Fox News America’s Newsroom, Fox Business, and probably others I haven’t picked up on.

Add to the list the Outsiders show on Sky News Australia, hosted by Rowan Dean. (You may remember him from this 2019 post.)

Here is the Sky News write up, US education curriculum sees a ‘complete takeover’ by ‘very scary’ leftist narrative

US middle school English teacher Ramona Bessinger says the past year in education has seen a “complete takeover” of the curriculum’s literary canon by books promoting a “narrative of oppressed versus the oppressor”.

“What I noticed first of all, what we all noticed was that … our vetted historical texts, our vetted literary texts, novels – all of the books that are in the literary canon were systematically, one classroom at a time, removed and put into recycling bins,” Ms Bessinger said.

“That was the most alarming part of all this curriculum rollout.

“Then all of a sudden boxloads of pamphlet-style books were brought into my classroom and my colleagues’ classroom.

“As I read through the books and became more familiar with them, one after another had the same narrative and that was the narrative of the oppressed versus the oppressor.

“It was always the same ‘white people as the villain’ and people of colour ‘victims of European descent’ – and this inaccurate picture of American history.

“And now it was all gone and replaced with this narrative of oppressed versus oppressor – very sad, very scary.”

Here’s the full 10-minute segment, with this money quote:

I’m very concerned. And that is why I’m speaking out because to not speak out, the alternative scares me more. Because what I’m seeing and this may sound alarming, but what I’m seeing is that children are being weaponized, and weaponized against and in a divisive way. So children are being, they’re being led to believe, if you tell a child something in the classroom, they will believe it, it’s why we don’t teach our political preferences to students. It is important not to teach that sort of dogma, you know you present all points of view. And so my fear is that children are becoming sort of political weapons, political pawns that eventually left to this sort of narrative being told to them, taught to them year after year after year. Well, it’s going to feed the sort of anger and the racial division that is already coming to a boiling point and it’s going to make us all quite frankly, very unsafe.

It’s a Soros-funded move, straight from the Marxist playbook, sowing discontent, pitting one group against another.

Through mental sodomy committed upon children’s minds mostly, remediation of which through a national de-marxification program will be expensive and for which the teachers union should pay billions in reparations for what they have done.

The left weaponizes everything in our lives.

This is about control. Nothing else.

Oops wrong thread. This site is somewhat hard to use with mobile phone and slow network.

Pol Pot had anyone executed who wore glasses 👓 , these were seen as a negative “marker” ( Marc Lamont Hill ).

If you talk to people who lived behind the Iron Curtain, and they tell you about the reality, especially in East Germany ☭ , I may say that the similarities are fairly obvious. The mechanisms , political and language, are totalitarian.

🇺🇸 Americas best bet may be the Cuban community who see it when it comes over the horizon. Their insights must be translated into English.

That Obama went to Havana was yet another mistake of his.

Actually, the mistake was allowing him to come back.

What this criminally negligent and reckless indoctrination with hateful marxist filth has done is psychiatrically damage our children.

The damage is immediate, as would be expected by telling children their parents and country are racist, and white skin makes them horrible human beings (in the case of caucasians), and telling children of color they are inferior, incapable of civil
behavior, and victims – in other words, subhumans.

The long-term psychiatric illnesses that children exposed to this fundamental identity abuse are likely to run the gamut from major depression and paranoia to outright psychosis.

The children’s minds were distorted and abused deliberately.

The teachers unions need to pay billions for cleanup of this mess, and children moving forward who have been exposed to this will need extensive psychiatric help and deprogramming.

The teachers unions and left need to pay massive, extensive reparations for this cultural and societal injury so that a national de-marxification program can be funded.

The Chicago-based Facing History and Ourselves has just released an ELA–English and Language Arts Curriculum that will never use the word Critical Race Theory, but “invites students to process texts through a critical and ethical lens. It goes on to insist that ELA and reading are to now be taught in a way to “provide tools to elicit positive change in their communities and the world.”

That would be the world the students have little accurate factual knowledge of because their ‘lived experience’ now counts as ‘learning’ in the classroom as long as it is interpreted through the supplied theoretical concepts and principles of Equity and Justice.

Glad to see that Ramona is repeating my book’s theme that education has become a weapon. If people only knew.

And as a result we end up with kids like Pavel Morozov, hero of the Soviet Union!

I think of critical race dogma as child molestation, because it’s affects our similar. Short and long-term emotional disturbances.

I teach, high school. If I am asked to teach CRT, I promise to subvert it.

CRT creates business opportunities, there will be a huge exodus from public schools, and demand for alternative non CRT teaching. Discuss this with like minded colleagues.

Go back to the bigging of the 20 century. Look up John Dewey 1859 to 1952. This was the man that started marxism in schoiols.

My book covers Dewey in chapter 1, including the links between his vision and Karl Marx’s for ‘human development’ and the Soviets translating his work shortly after the Bolshevik Revolution when they were still quite low on cash. It was that much of a priority for their ultimate vision.

Today we see a great deal of referencing of both Dewey’s vision of pedagogy as inquiry in the Roadmap to Educating for American Democracy, which launched in early March and is now sponsored by the federal Department of Education and the NEH. It is also a crucial element in the pushed ‘Civic Mission of the Schools’. I covered that in Chapter 4 explaining what a competency framework is and how it shifts the focus of education away from subjects themselves.

Communism has always been
brain wash kids and have them go after the parents.
Their following Mao’s Red Book

We’re in “millstone around the neck” territory when it comes to what’s being done to the little ones by these leftist ghouls.