After our letter warning the event violated state public accommodations laws and Fox News coverage, the District changed the location of the event and the sign up form was changed to list “white” as a category for registration. 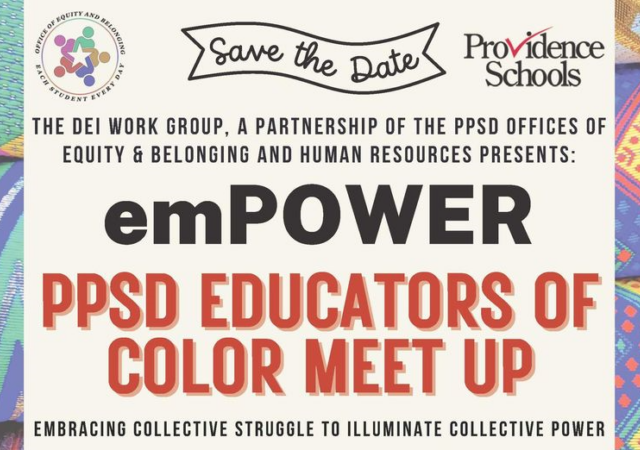 The Providence, Rhode Island, Public School District has a loan forgiveness program for new and recently hired teachers, funded by the Rhode Island Foundation, the largest charity in the state. There’s a catch, however. Whites need not apply, it’s only open to non-whites.

Legal Insurrection Foundation has filed a challenge to this overtly racist and discriminatory program, after a 6-month investigation that included obtaining information from public sources and also from records obtained by LIF pursuant to the Rhode Island Access to Public Records Act.

You can read the full Complaint.

We have received multiple tips about problems with equity racism in PPSD, including an “Educators of Color Meet Up” organized by PPSD at an outside venue that was promoted as being for non-white educators, who were the only people invited, and the event registration form had only non-white races and ethnicities listed.

A non-profit called Legal Insurrection Foundation (LIF) on Tuesday sent a letter to the Nelson Event Center, located in Cranston, Rhode Island, to put them on notice for hosting a “racially discriminatory” event that was planned by the PPSD.

LIF President William A. Jacobson sent Fox News Digital a statement regarding the letter being sent.

“PPSD is so obsessed with its Equity agenda that it has crossed legal lines, engaging in open discrimination against white teachers. We saw open discrimination in the new teacher loan forgiveness program, open only to non-whites. Even though we filed a federal civil rights complaint against the loan program discrimination, PPSD is undeterred. Now PPSD is organizing and promoting segregationist teacher affinity programming,” Jacobson said.

“PPSD appears to think it is immune to the anti-discrimination laws that apply to everyone else,” he added….

You can read the full letter here. Here is the text:

I write on behalf of the Legal Insurrection Foundation (“LIF”), a Rhode Island tax-exempt non-profit that, among other things, seeks to ensure equal protection and non-discrimination in education, and that opposes racial discrimination in America’s schools.

On Thursday, January 19, 2023, between 4:00 p.m. and 6:00 p.m., The Nelson Event Center at Lang’s Bowlerama (“NEC”) is scheduled to be the venue for an event titled “PPSD Educator of Color Meetup” (the “Event”), organized and sponsored by the Providence Public School District (“PPSD”). The event poster (Exhibit A) indicates that the Event is for “PPSD Educators of Color,” and the registration form (Exhibit B – https://archive.is/CV7ud) indicates that the purpose of the Event is “to bring Educators of Color together” (emphasis in original) and that “[w]e are inviting Educators of Color” to the event.

By its own terms – a Meet Up for “Educators of Color” with only Educators of Color invited – the Event has been promoted as racially exclusionary.  Only non-whites have been invited, and the registration form contains a checklist of only non-white categories for attendees to use in self-identifying their race and ethnicity. The Event has been promoted by the PPSD on Facebook (https://archive.is/Cc1kH), PPSD’s website (https://archive.is/dKPJF), and internally using racially discriminatory terminology.

The purpose of this letter is to put NEC on notice of the racially discriminatory nature of the Event, since the event is taking place at NEC’s facility. Under clear Rhode Island and federal law, it is unlawful for a place of “public accommodation,” such as NEC, to discriminate on the basis of race or ethnicity. See Title II of the Civil Rights Act of 1964, 42 U.S.C. § 2000a(a), and Rhode Island Gen. Law § 11-24-2. While NEC does not appear to have organized the Event and may not have understood the discriminatory way in which the Event was promoted by PPSD when NEC agreed to provide the venue for the Event, by permitting its facility to be used for the Event, NEC’s legal non-discrimination obligations are implicated as a matter of law.

Further, government-sponsored programs that discriminate on the basis of race are not only unconstitutional, but also offend state and federal civil rights statutes. By providing the venue for a known racially segregated program, NEC potentially could be held jointly liable for any such violations.

While it is profoundly distressing that a government entity like PPSD would engage in apparent racial discrimination, it is especially troubling that it wishes to do so just days after a federal holiday honoring Dr. Martin Luther King, Jr., whose life was dedicated to the ideal of non-discrimination and racial healing.

We thank you for your attention to this letter, and we trust that you will be guided by the legal and moral demands for non-discrimination in a place of public accommodation.

Here were the Exhibits referenced in the letter: 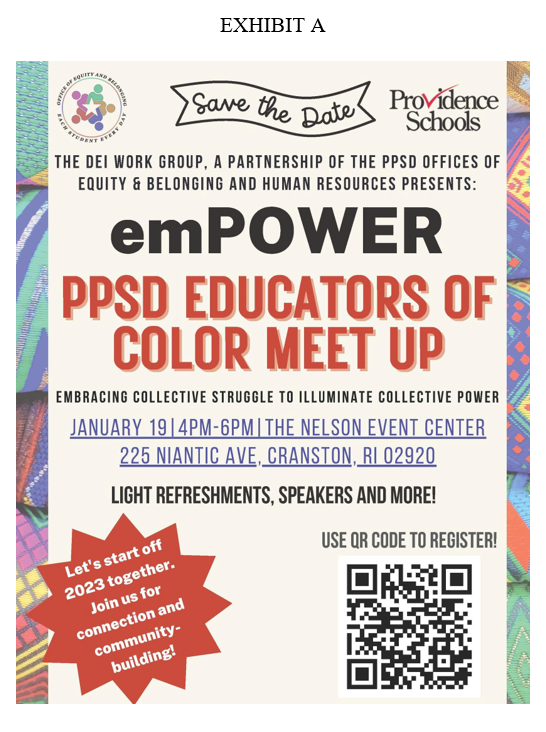 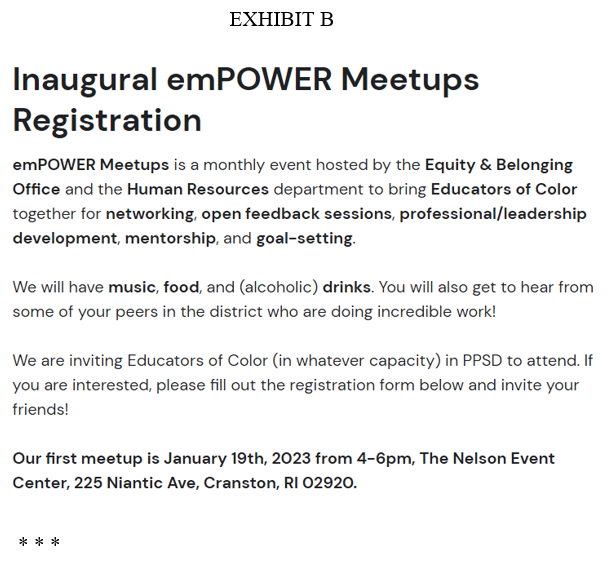 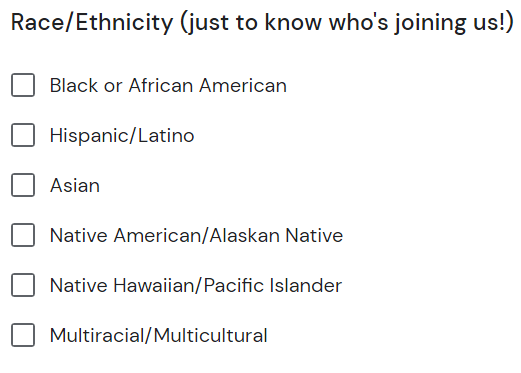 All of the above was screenshotted and archived (see letter for archived links).

After receipt of our letter yesterday and after Fox News had reached out for comment to PPSD (and right around when the Fox News article published), PPSD published a new Facebook post for the event changing the location: 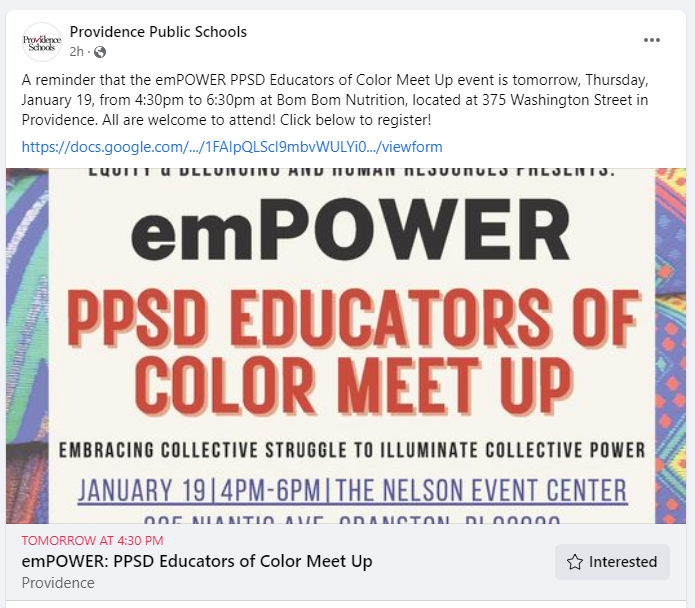 And significantly, adding “white” to the category of people on the sign up form (https://archive.is/nKRUH): 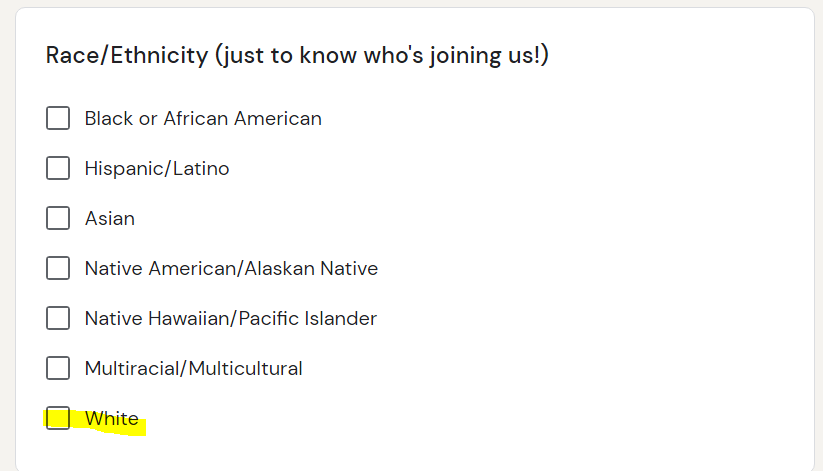 Opening the event registration form to whites is a good first step, but the event still is billed as being only for “Educators of Color.”

This sort of racial discrimination in the name of DEI is why we are creating (and still fundraising) for the upcoming Equal Protection Project will focus on challenging at every level.

I’m so over people of “color”

Please go back to wherever your sorry butt ancestors came from, will pay for one way ticket, and see how your victimhood works out for you

My observation is “people of color” is a euphemism for “black”.

My friend buzzsawmonkey spells it “people of choler”. And refers to white people as “people of pallor”.

My tinfoil hat is screaming.

The location has been changed from
“Nelson Event Center” to “Bom Bom Nutrition“??

This stinks of the “fake prom scam.”

Someone needs to call the “Event Center” and try to book it for 4-6 on the 19th. See if maybe the Providence Schools still has it booked.

Seriously, is learning proper grammar, algebra and trigonometry that difficult?

only when you’re taught these subjects in Ebonics

No, but it’s racist.

Dumb-o-crat Regressives, undermining racial progress at every opportunity, with their corrosive and indefensible racism and attendant agitprop.

That said, throw another Jew… baby on the barbie.

If PPSD really believed in equity (which I don’t), no race or ethnicity should be asked.

I can’t imagine the calls of systemic racism that would be levied by the NAACP if it were a call on white educators regardless of the open invitation list.

The highways would be blocked.

Even stodgy New Englanders will get their fill of this woke trash and form an orderly backlash.

The acronym for Diversity, Inclusion, and Equity should be more appropriate to the goals of the CRT true believers: DIE instead of DEI. After all would God condone what they espouse? And aren’t they trying to kill genuine education and good will among people of different races?

I think they are trying to normalize disfunction.

This legal layman notes that the complaint does not appear to name a white teacher who was prohibited from attending the conference.
This is a significant element of the problem.
Non-whites are quite aggressive and enthusiastic about patently racist practices.
Whites roll over and play dead.

This meeting does not pass a “smell test”. That is flip the meeting notice over the other way and see what happens. If the meeting was for white educators and the check box for attendees excluded anyone but whites, there would be no doubt of its racially discriminatory intent Racism can exist in both directions and is illegal under most federal and state laws.

Indeed. That is the proper designation. But they, purposefully, chose “Diversity, Equity and Inclusion”, in that order because Dei implies “of God”, which this nonsense most certainly is not, since it is the brainchild of atheists; godless communists.

Just as you have in this instance, I ALWAYS ‘correct’ those citing DEI by telling them the the proper usage would be DIE because that is what this practice causes to happen to organizations that embrace this hideous system of belief.

I’m a person of color; SEVERAL colors, in fact, ranging from a sort of ruddy to pinkish to a somewhat tan color. Do I qualify?

Three times over I guess.

Just read they backed out of this.

OK. We’ve put up with these intolerant victim identity groups stealing the name of God for long enough. This is cultural, religious appropriation.
How many snowflakes must be harmed before DEI is removed from their mailings? From their administrative offices?