Activists within and outside Classical High School are trying to get Bessinger fired and incite people against her, and now it has spilled over into a threat screamed at her from a student leader in school this morning, according to Bessinger: “F-you, F-you, I want to kill you.” She has filed a police report and notified the school. 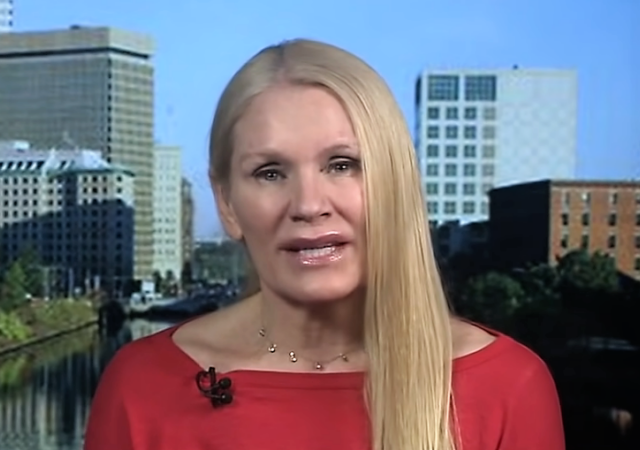 Ramona Bessinger is the Providence, RI, teacher who has been under attack ever since, as a middle school teacher, she blew the whistle at Legal Insurrection on a new radicalized and racialized curriculum that was creating racial tension in school, including turning students and staff against her because she is white.

Bessinger suffered retaliation, including physical intimidation. Bessinger also received an involuntary transfer to Classical High School, where she sat in the basement for almost a year before finally getting a classroom teaching position after filing a formal grievance.

In the past month, a campaign to drive Bessinger out of Classical High has been organized ostensibly by students, but Bessinger says teachers have been involved. See these prior posts for more background.

The “progressive” community is working itself, and students, into a frenzy on social media encouraging and amplifying the efforts to get Bessinger fired. Accusations Bessinger says are  false are spread on websites and Twitter. 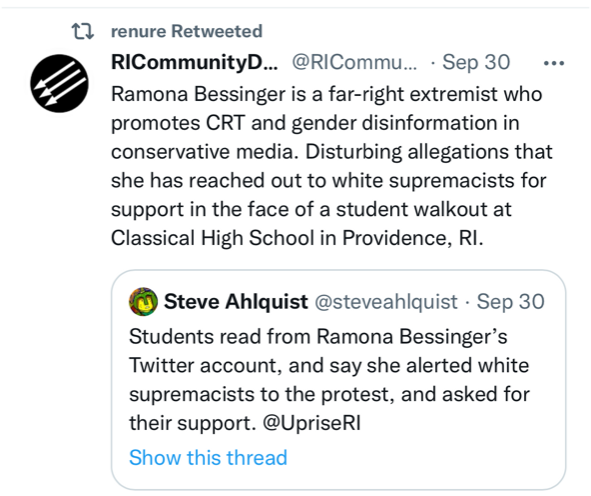 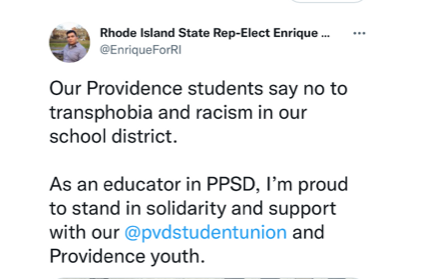 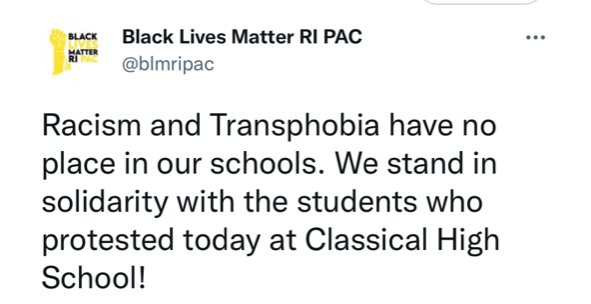 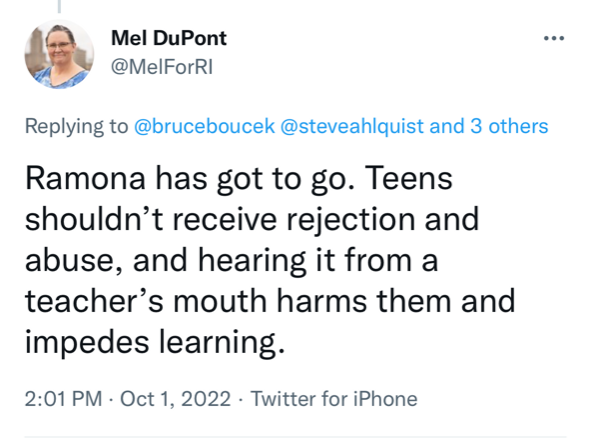 Bessinger has previously notified the school administration of her concerns for her physical safety. This morning the situation worsened dramatically.

Bessinger says she was walking down a hallway-type area not far from her classroom when she heard shouting at her. It was not until she was closer, only about 10 feet away from a group of students, that she heard one of the student leaders of the protests screaming at her in front of other students that he would kill her: “Fuck you, fuck you. I want to kill you.” He may have screamed other things as well before she realized he was screaming at her.

No other students were screaming at her. Bessinger says she had previously complained to the school about this student hanging around outside her classroom.

She has reported the incident to the school as well as filing a police report. According to what she was told by the police officer, the student is being charged with Disorderly Conduct. She does not know if the police will issue a restraining order. We will try to get a copy of that report from the Providence police.

The school has not informed Bessinger what steps are being taken with regard to the student being permitted to remain in the school or to protect Bessinger. On September 29, as part of seeking comment on the protests, we emailed Providence Public Schools the following question:

2. What steps is the administration taking to ensure Ms. Bessinger’s safety, given her history of complaining about harassment and social media postings by students calling on participants to cover their faces to avoid identification?

As of this writing, we still have not received a response.

That would be a ‘all in YOUR head’ kinda thing. Reporting on death threats against a person is a neutral sort of thing. Unless of course you personally agree with killing people you disagree with.

I would assume the Biden’s Stasi monitors LI.

Of course, all reasonable people can agree that this site is rife with nazi joos, black faces of white supremacy and other ne’er do wells

I think you mean a rhetorical question designed to express disbelief rather than sarcasm.

If 3 questions marks didn’t signal it, I’m damn sure four should have. I got you star, I don’t know why others didn’t.

Anybody who opposes their new chardonnay racism is automatically a white supremacist.

To the Democrats/Marxists, anybody to the right of Stalin is a far-right white supremacist.

Well it has one adolescent redneck making inappropriate comments and I resemble that remark.

Well, it does have “insurrection” right there in the web address.

Hey, shouldn’t the National School Board Association, or the Teachers’ Union, or both, send a letter demanding the FBI track these domestic terrorist students?

I mean, of course The American Stasi are surveilling these kids, but a letter gives them cover, and fodder for a memo from not-Justice Garland. Seems like a no-brainer.

(Comment also posted to prior article on this topic.)

The only way those far left institutions would send a letter of “complaint” would, as you say, be for legal cover.

And the tweet from that, um, “person,” Mel DuPont, seems to ignore that this teacher is receiving “rejection and abuse,” not to mention what the DO(IN)J counts as “domestic terrorism” by the leftist teacher supported, belligerent student thugs.

Not only are teens “receiv[ing] rejection and abuse,” she’s also “imped[ing] learning” by forcing them to yell death threats at her.

She’s a scary and dangerous mob of one.

We need to increase the size of that mob.

I just learned about this organization today.
It looks like it could be the patriots’ answer to the left’s well-organized rent-a-mob network.
(Don’t be spooked by the mention of Canada in the video, they’re based in Idaho.)

I hate to say this, but somebody IS going to try and kill her, and given the political leanings of the potential jury pool, they will get off.

Remember when this would get a student suspended immediately and probably expelled?

Not to mention a visit to the local police station. IIRC, if deemed credible, this can be considered a criminal threat.

Now the teacher has probably been branded a semi-fascist MAGA type and the student gets pats on the back.

Next step, the students get to subject teachers and professors they don’t like to public struggle sessions.

“Remember when this would get a student suspended immediately and probably expelled?”

The public schools being a government monopoly, there are no other educational options for a student who has been suspended or expelled. This is why thugs are no longer removed. See the Stoneman Douglas shooter.

That’s nonsense. In the times before public schools encouraged thugs, they expelled them under the “Rule of Tough”.

Meaning: “What? You can’t send your thuggish kid to a free school any more, and now have to spring for private school tuition? Tough. Not our problem.”

Who cares? Real life-altering punishment can be a good deterrent. They may understand fear; nothing else would deter them, and they need to be stopped by whatever level of impetus it takes.

Most of these thugs don’t really want to attend school because they have a future without education and dependent on welfare and crime.

IMO that’s not ‘normal’ unless the student felt like it was something not only safe for him/her to do but encouraged. This appears to be a slow burn lynching sponsored by the supposed adults at that school.

I would not be at all surprised to see some violence break out towards her unless someone grabs the school administrators by the scruff of the neck and explains the facts of the law (and their personal exposure to it) to them.

She should receive about $10 million severance for this, but unfortunately it would just come from taxpayers. Still, she should get it. Sue for 100 mil, settle for 10.

“unfortunately it would just come from taxpayers.”
In RI, that’s just another case of “voters getting what they demanded, good and hard.”

God bless her for trying to do the right thing, but maybe it’s time for her to pull the plug, and find a better school to teach at, or another line of work. This school system doesn’t deserve her.

I used to be embarrassed about having relatives who were “associates” of the mob. But perhaps, I now realize, they had a practical approach to problems like this that worked.

What has happened at this school and to this dedicated teacher is re enforcing my belief that if you want to protect your child, heart, mind, body and soul – get them out of public schools.

The schools are the enemy. The schools will indoctrinate your child to hate all you stand for and believe in. If the public schools have their way you will be the parents of such thuggish behavior and will be unable to do anything about it.

The Woke increasingly depend upon hysteria as their chief weapon. They stir each other up until (a) most often the powers-that-be get panicked and do whatever the mob wants them to do, (b) the person(s) involved are freaked, turn tail and run, or (c) the subject of their rage gets killed, the perpetrators get indulgent treatment—since they were incensed by mob hysteria it is ‘not their fault’—and receive minimal punishment or go scot-free. In any case, end of problem for the Woke and for civil authorities, administrators and suchlike. Note that this form of political expression is entirely governed by emotions and not subject to rational control. This is why we have so little rational debate on any subject and such widespread criminality: the codes of law and civil behavior have been supplanted by the rule of subjective perception—i.e., the jungle.

“The Woke increasingly depend upon hysteria as their chief weapon.”

Well, that, and fear, surprise, and a ruthless dedication…..okay, there are FOUR Chief Weapons of the Woke…..

The woke left is intolerant of any dissent

Is it legal to carry a concealed weapon in a R.I school??